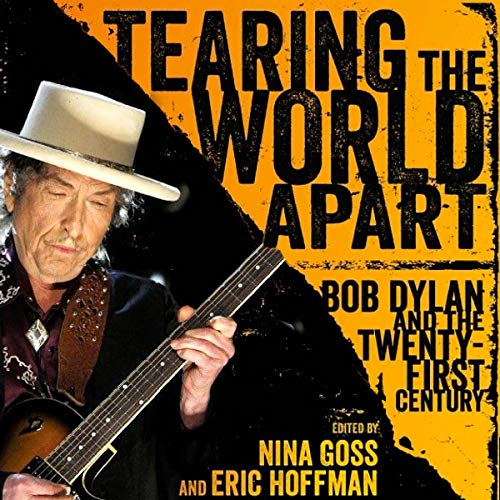 Bob Dylan is many things to many people. Folk prodigy. Rock poet. Quiet gentleman. Dionysian impresario. Cotton Mather. Stage hog. Each of these Dylan creations comes with its own accessories, including a costume, a hairstyle, a voice, a lyrical register, a metaphysics, an audience, and a library of commentary. Each Bob Dylan joins a collective cast that has made up his persona for more than 50 years.

No version of Dylan turns out uncomplicated, but the postmillennial manifestation seems peculiarly contrary - a tireless and enterprising antiquarian; a creator of singular texts and sounds through promiscuous poaching; an artist of innovation and uncanny renewal. This is a Dylan of persistent surrender from and engagement with a world he perceives as broken and enduring, addressing us from a past that is lost and yet forever present.

Tearing the World Apart participates in the creation of the postmillennial Bob Dylan by exploring three central records of the 21st century: Love and Theft (2001), Modern Times (2006), and Tempest (2012) - along with the 2003 film Masked and Anonymous, which Dylan helped write and in which he appears as an actor and musical performer.

The collection of essays does justice to this difficult Bob Dylan by examining his method and effects through a disparate set of viewpoints. Listeners will find a variety of critical contexts and cultural perspectives as well as a range of experiences as members of Dylan's audience. The essays in Tearing the World Apart illuminate, as a prism might, their intransigent subject from enticing and intersecting angles.

"I learned much, took many notes, went down some new trails, and sang along the way." (David Gaines, author of In Dylan Town: A Fan's Life)

What listeners say about Tearing the World Apart

Nothing new here... narration is horrible... the mispronunciation of words and names was distracting. As a fan of Bob Dylan I was very disappointed in this audio book.

This book deals with the post millennial Bob Dylan and focuses on ‘Love and Theft’, ‘Modern Times’ , ‘Tempest’ and the film ‘Masked and Anonymous’. The various chapters are very insightful and offer much food for thought. However they are not always easy to listen to since they are mostly written by scholars.

There is a depth to many of Dylan songs that not even most of his fans are aware of. This book gives insight into the work of a great songwriter and yes...a poet. I enjoyed it immensely and finished the whole thing in just two days.

Although this book mentions all of Dylan's music, the focus is on some of his "later in his career" albums, namely Love and Theft, Modern Times and Tempest, the film Masked and Anonymous and the "never-ending tour." They do an in depth analysis of all of these. As someone who started following Dylan about 10 years ago, I found it hard to stop listening. Be warned though, most of these discussions have depth. It is not always an easy listen but well worth the effort. Anyone who appreciate Dylan and his music will appreciate and enjoy this book.

Takes a bit of brain power but worth it.

What I mean by the title is that the people who dissect Dylan's songs in this book are college professors's for the most part, and like most college professors, they get a bit "deep" at times.....lots of "big words.

If you are willing to put up with that, it's well worth the listen Dylan is more than just a songwriter. He is a poet and a great one.