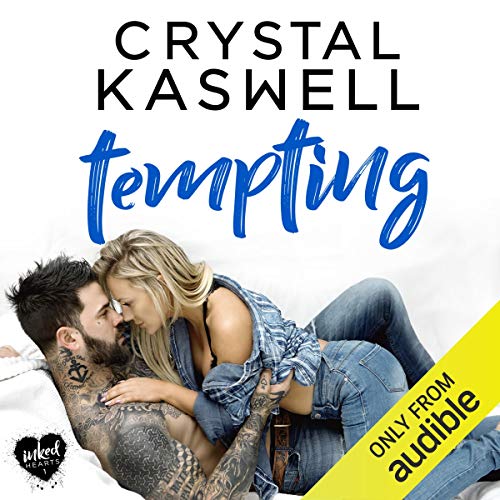 I shouldn't peek into Brendon’s sketchbook, even if the tattoo artist is as brooding and stoic as the day is long.

I can't help myself. I peel it open, run my fingers along the paper, soak up every ounce of him. His drawings are as beautiful and bold as his dark eyes and his cocky smile. Only, there, on the third page - that’s no tattoo mockup.

That's me. Naked. Ready. Waiting in his bed. There's no denying it - those are my blue glasses, my green eyes, my flushed cheeks. Brendon wants me. The smoking hot, 10,000 miles out of my league bad boy wants me - a good girl v*rgin with thick glasses and no game. It's perfect. Only it's not. He's my best friend's older brother. He's off limits. But damn is he tempting.

More books about the men of Inked Hearts available now: Playing Pretend You're Mine

From the author: Tempting is a smoking hot, brother's best friends romance with the perfect mix of heat, humor, and emotion. Come find out why listeners say "no one writes broken bad boys like Crystal Kaswell".

What listeners say about Tempting

Falling for the tattoo artist....

Kaylee is about to start college when her parents inform her that they’re moving to the east coast to be with her grandmother. They don’t go into detail about that but they have made arrangements for her to stay with her bff and her brother.
Brendan has a thing for Kaylee but he is mindful of the 8 yr age difference. Having Kaylee living with him and his sister will make it all that more difficult. Maybe buying the tattoo parlor, where he works will be the perfect distraction. That seems to be working until Kaylee reads his journal and sees erotic drawings of Brendan & herself. The pair embark on a secret affair...but will it last when it cones to light? Besides, Kaylee has a huge secret that keeps her from being all-in! Will there be an HEA for Kaylee and Brendan? Beautiful story, although some parts did drag a bit...still worth the read-listen.

It's a loving story but also heartbreaking too

An amazing story of a broken woman told with emotion. Kai Kennicott and Wen Ross were the perfect narrators. They brought out each word with passion.

I’m a fan of best friend sibling romances. The 8 years age difference did not bother me. Brandon was responsible guy. He kept referring to Kay as he was supposed to be her guardian. What 18 year old high school graduate needs a guardian? Kay was very immature and that I believe is what put me off on the romance. Her and the best friend were obsessed with Disney movies. I skipped through a lot of the “best friend” talks. Em was annoying. I do not understand why Kay just didn’t say I don’t wanna to talk about my “sex” life with you right now. When I want to talk I’ll come to you but for now drop it. Don’t lie. Which also shows a bit of immaturity.
Some of the book repeat phrases and words KILLED me. “closer- closer- closer.” Over and over. “Yes we get it fingers are almost to that spot. Yes his tongue his almost to that spot. I think liked the story. I was the female was a tad more mature. I didn’t have to hear about an adult loving Disney movies while reading an adult book.
I think the narrators did a good job. I would listen to them again.

Really enjoyed this book 😀 ! Some parts had me in tears but other then that just a great story.

Brendon & Kaylee’s Moving Story Is Tender And Patient. Broody With A Dose Of Kink, Brendon Falls For His Little Sister’s Best Friend, Whose Secret Crush Isn’t So Secret. Don’t Forget To Download The Bonus Epilogue! Sign Up For The Mailing List Then Scroll Down To The Bottom Of The Email For The Link.


Inked Hearts is a tattoo parlor in Southern California. Brendon, Ryan, Walker and Dean are like family. They are tattoo artists and the heart and soul of the shop, along with Leighton who runs the front desk. Manning, who has been an absentee owner for the past few years, has left its management to Brendon and Ryan, who somehow manage to get things done despite their lack of coordination. Together they all serve a variety of clients – to include some rather well-known celebrity types.

Fans of the Dangerous Noise series will be thrilled that there is a little crossover here! Joel Young, drummer of Dangerous Noise, makes an appearance. His story with Bella Chase is found in Dangerous Rock, book three of the series.

Kaylee Hart, now eighteen, is looking forward to beginning at UCLA in the fall. Smart and sweet with a sense of humor, she has always been a straight A student. Her best friend Emma got an early start over the summer, choosing to both work and go to college part-time. Em is interested in studying business; Kaylee, however, is uncertain about what she wants to do with her life. She loves reading and writing, but isn’t sure how to translate those into a career. Last year, when so many high school seniors were thinking about what they want to do – about their college major and future career – Kaylee was focused entirely on just staying healthy. While she had always channeled her insecurities into her achievements, things had taken a turn. Getting past the dark thoughts had taken some work. She is finally in a relatively good place, but she will always be broken. It is her secret and her shame.

Brendon Kane, twenty-six, has always been a brooding bad boy. He fell in love with ink when he got his first tattoo, and his love of art led him to a career he loves. He had been young and angry when he started his apprenticeship. A punk. He wasn’t exactly into drugs, but he also didn’t choose the best crowds to hang out with. His choices caused a lot of conflict with his mother, who thought he was a bad influence on his sister and asked him to leave. The rejection had hurt, and he never wanted to turn his back on his sister. But today Brendon is tired of playing Dad. Being the guardian of his little sister has altered the nature of their relationship. Nevertheless, he wouldn’t change things if he could. When their parents died in an accident, he and Em were fortunate enough to inherit the family beach house in Venice beach as well as some life insurance – enough to give them each a good start in life. It is ironic that Brendon now finds himself responsible for his eighteen year old punk-loving sister, full of spunk and rebellion. He finds himself questioning who he is anymore. Though he may still rock the brooding bad boy vibe, he might also have become a bit square.

When Kaylee’s parents suddenly leave their Santa Monica apartment behind to move cross country and be with her ailing grandmother in New Jersey, Kaylee’s life is upended. Her parents announce that the Kanes have agreed to allow her to live with them so she can remain in the area and attend college as planned. Kaylee is torn by her love for her grandmother and honoring her grandmother’s wishes that she not neglect school, not to mention the fact that she wasn’t even given a choice in the matter. But she had spent so much of her time in Em’s home since moving to California ten years ago that it already felt home to her, so her adjustment wouldn’t be too difficult.

Living with Em’s brother Brendon, however, would certainly be a challenge. Kaylee had crushed on him since she first saw him all those years ago. Though he had a long history of dating, and she had some dates of her own, now that she has turned eighteen she felt for the first time that he perhaps saw her as a woman. But even if he did begin to return her feelings, he didn’t know who she really was. He only saw what she let him see. As much as she wanted him, it would never work. When Brendon agrees to take in Kay, he knows he is in trouble. For months he has struggled to forget the way he suddenly began to feel around her. She is too young, and he would never come between Em and her best friend. And most importantly, Kaylee is everything innocent and sweet. She deserves someone good, and that is definitely not him. He is determined to do the right thing.

Brendon and Kaylee’s story is a real journey. Kaylee has a skeleton in her closet. Depression. She faces it bravely, but owns the struggle. Her story is very real, and her efforts may indirectly give hope to those struggling themselves with the disease. While she and Brendon have felt their connection changing in the last number of months, the move sets their love story into fast forward. Under the same roof, they are forced to face their feelings for one another. With living together, the age gap, and best friend situation, their relationship is complex. But even if they can overcome those challenges, both Brendon and Kaylee have issues of self esteem that will sabotage their happiness if not addressed. They must learn to trust one another. They must open up and become vulnerable. Their story is deep. Brendon may still be a bad boy in the end, but he is so much more. The couple eventually earns a happy for now ending. Don’t forget to download the bonus epilogue! Sign up for the mailing list then scroll down to the bottom of the email for the link.

Brendon and Kaylee’s moving story is tender and patient. Broody with a dose of kink, Brendon falls for his little sister’s best friend, whose secret crush isn’t so secret. The story is wonderfully written. The characters are real and raw. The story is written in first person. The POV alternates between Brendon and Kaylee. I rate this book five stars.

I received an advance copy of this book and am voluntarily leaving a review.

As for the Audio: it is very well-performed. The voices overlap in parts, lending a natural conversational feeling, though at times it would be helpful if the volume of the second voice were lowered a bit. The end includes introductory chapters from two other books: Dangerous Kiss and Dangerous Crush, books one and two from the Dangerous Noise series.

probably a trigger for me because I have had to deal with my monster in laws depression and suicide attempts. The main female character is horribly preoccupied about her depression. It was Exhausting. Well written, very well preformed.

I did enjoy most of this story and the narration is great (love Wen Ross's reading style) but there was an ongoing theme of "want to tell but can't" over and over and over. It got really repetitive, especially considering that in this day and age the issue she has is accepted by most people.