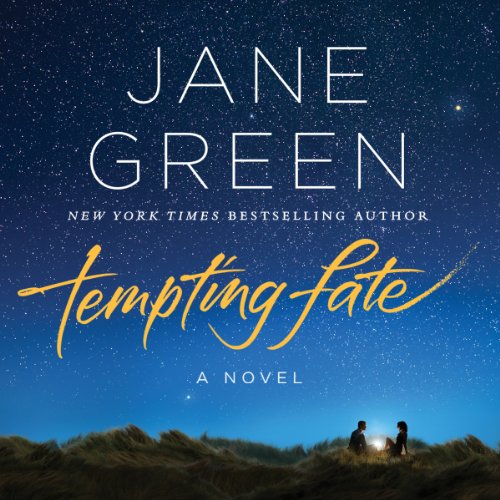 In Tempting Fate by Jane Green, Gabby and Elliott have been happily married for 18 years. They have two teenaged daughters; they have built a life together. So why does 43-year-old Gabby feel like she has only three more minutes left of youth? Why do her friends so desperately try to hang on to their attractiveness? And why does she ever even look at the handsome guy - 10 years younger - at the other end of the bar one night?

As Gabby steps ever deeper into the allure of attraction and attention, things turn perilous. If she makes one wrong move, she could lose everything - and find out what really matters most.

What listeners say about Tempting Fate

I almost always enjoy Jane Green's books. and this one is no exception. Good story, great characters, and overall well done. My only (slight) complaint is that Jane should leave the narration to someone else. She's not terrible, but I have heard better. Overall an enjoyable listen.

Self Narration is not always the best idea

I really really did not enjoy Jane Green's style of narration. All of the characters have the exact same voice, which by the way, is so boring and almost like listening to someone whispering. I guess I am spoiled by the narrators I usually enjoys such as Jilly Bond, Gabra Zackman, Amanda Ranconi, Orlagh Cassidy, Suzy Aitchison, Kim Hicks. All of these narrators I think do amazing jobs and I have started purchasing books based on their participation. I should have listened to the sample. I will take the other reviewers advice to speed up the pattern to 1.5 to see if that helps.

Would you ever listen to anything by Jane Green again?

Yes, if she does not narrate it

Would you be willing to try another one of Jane Green’s performances?

What did you love best about Tempting Fate?

I liked the twists and turns to the story. It was a little predictable but the truthfulness and raw emotion presented made me forget that. I liked that while the characters made progress in their lives, the story did not end all wrapped up perfectly.

She didn't have enough difference in the characters voices. Also, she was voicing people from the US with a British accent, which was confusing since it was hard to tell the character voices apart in the first place.

The book is nothing else than expected. The literary equivalent of a tragic chick-flic, conservative and judgmental. There were a lot of more interesting twists to this thousand-times told story. There is the guilty good wife, the spotless clean husband, the mean old bitch, and the ruthlessly judgmental environment of the American suburbs (which is totally believable).

Despite the shortcomings, I give it three stars in story for two reasons: the first part of the story describes the emotional state of a cheating wife with scary accuracy (sometimes with a touch of exaggeration, but the way it must feel); secondly, precisely because the story is so predictable, as it develops it's hard to believe that it actually goes just as you expected, so that in the end it was hard to put down because I could not believe that the author would just not separate from the expected plot.

Who would you have cast as narrator instead of Jane Green?

It is usually great to have authors as narrators, but Jane Green couldn't speak slower and it made me anxious. I ended up listening at 1.25 and it improved exponentially. At that speed her voice sounded normal. I think I would have ended up putting the audiobook down otherwise.

What character would you cut from Tempting Fate?

The object of the protagonist's sinful desire could have been more believable. The awesomeness of that character seemed to me as judgmental way to justify the shortcomings of this suburban "wife-like-me". The author did not need to make it a gorgeous young zillionaire to make us believe he could arouse the feelings and obsession of the main character, it actually gives it the glow of a Disney fairytale. Everyday, nice middle-aged wives get entangled in very similar affairs with other middle-aged, middle-income and average looking guys-next-door. The model girlfriend of the super-millionaire was the cherry on top of an already unbelievable character.

If you are looking for soap-literature, this is an entertaining option.

I am so glad I purchased this book on Audible. I recommend it . I prefer reading a physical book myself rather than listening to it and I love this app but sometimes books are ruined because they just don't sound right with some narrators....however Jane Green narrated her own book and she is absolutely amazing. Her voice is wonderful and I felt like I was actually listening to the character talking. The book is good too of course. I think most females can relate to the main character. It is a good love story.

A rather predictable scenario in most ways

Meh. It was not as engrossing as earlier Jane Green books, and I am a fan of this writer. One aspect that drove me nuts is that the author read the book herself and she was not as good as a professional reader would have been. It got on my nerves.

Would you recommend Tempting Fate to your friends? Why or why not?

Probably not, as I don't see this one as one of her best. I couldn't empathize with this almost stereotypical "american" sort of suburban story with a feel good ending. Yes, spoiler alert here.

With a proper, professional reader and not the author.

Do you think Tempting Fate needs a follow-up book? Why or why not?

No. I don't care that much about any of the characters. The most interesting (with only a brief appearance) was Gabby's mother from London.

The author reads this almost as if a soporific sermon on romance, but yet it is not. I almost did not finish, but decided (given the promo reviews) to keep going. A bit shallow, too, given that the characters have no worries about money, health, etc etc etc. An almost juvenile book for those who think dreams come true.

I recommend this book. It is interesting and keeps your attention. They made a Lifetime movie (book to screen) I watched the movie first and loved it. So I had to read the book and it was more exciting and more detailed. I thoroughly enjoyed and loved it.

the story seemed slow as it was read. (and it was not the rate I had the book read) I prefer audio books that have more voice changes while reading a story. like it sounds like there are different readers, but it really is only one person. this one did not. but I enjoyed the story of the book

I could not even listen to this book because it is read by the author and her strong accent is so distracting it really took away from the book for me. I'm really disappointed but I could not make it more than 5 minutes into this book.

the story was fine, but the narration was difficult to take. She was trying to act out the parts, and subsequently over read.