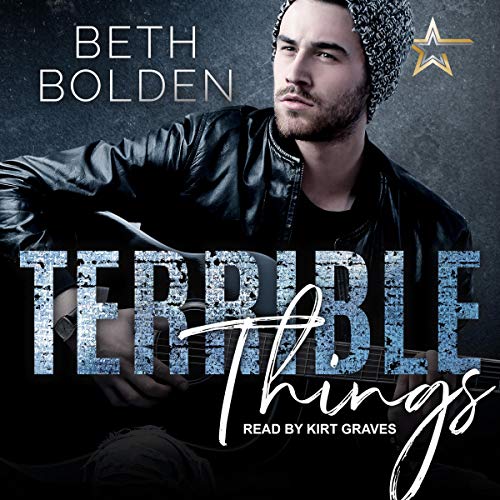 Written by: Beth Bolden
Narrated by: Kirt Graves
Try for $0.00

When Caleb Chance walked out in Detroit five years ago, leaving his band, millions of his fans and his lover behind, Leo knew he could never forgive.

Some things, no matter what the cause, are unforgivable.

But Leo never expected Caleb to show up again, clean and sober and wanting to get their band, Star Shadow, back together. He definitely never expected to agree to Caleb's plan.

He never expected to confront the love of his life again - or the disaster of his past, the hopelessness of his future, and every terrible thing he's been carrying inside him.

But maybe some things aren't so terrible after all.

What listeners say about Terrible Things

Slow burn but so worth it...

This book got me tangled up in all sorts of feels...

It’s written in such a way that you can’t help but feel for Caleb and Leo. Two best friends who are each other’s soulmate, torn apart by the demands of the music industry, of fame and of unfortunate circumstances beyond their control.

This story is about finding ones self, it’s about friendship and loyalty, undeniable chemistry, the struggles of being in a relationship behind closed doors, pressures and demands... drifting apart and healing... and finding love all over again and forgiveness in the truest sense of the word.

It’s a slow burn, so slow it drove me crazy, but also, you understand the process, why it took that long.. you get it.

It’s a beautiful love story of fighting for your forever love, of always choosing to love and be happy.

And of course, music, it’s the language that transcends all languages and boundaries. It aids healing.

This might be my favorite Beth Bolden book. The angst is so relatable. The emotions palpable.
Kirt Graves’ exceptional talent helped a lot in that aspect. He’s such an excellent narrator. It brought life to this emotionally charged book.
👏🏼👏🏼👏🏼👏🏼👏🏼

Beth Bolden is a new author for me. I really enjoyed this book and it will be going on my “relisten” list. I will be looking at the rest of her books and will definitely be checking for the rest of this series!

Story has all the emotions covered.
Kirt Graves is a fantastic narrator.
I will keep this in my Listen Again folder.

A Thumbs Up For Sure!

This was a read and listen for me. Kirt Grave's performance was awesomeness. The narration was perfect. However, what most people don't understand is that Kirt's performance can only be great if what he's reading is greatness! That being said I'd like to give a shout out to the author, Beth Bolden. Thank You for sharing with us readers your incredible imagination. I loved this romance. It is what I would call a slow burn. I usually hate slow burns, but this one was so delicious. It was romantic, sexy, seductive, interesting, morally sound and most importantly food for thought. I highly recommend this book to the mature reader and Listener. Thank You Beth for Sharing.

This is my first time with this author. Truthfully I bought it because Kirt Graves was the narrator and I’m a sucker for music stories. But man was I blown away by this one. Caleb’s story is heartbreaking. And the fact that Leo lives without him for 5 whole years did me in. He never got over Caleb’s addiction even though it would have sent most people running. Their love story is one of soulmates who can’t live without the other. But their journey back to each other is long...and so worth the wait. The other band members are great side characters that I can’t wait to listen to. Kirt’s narration knocked this one out of the park!!!