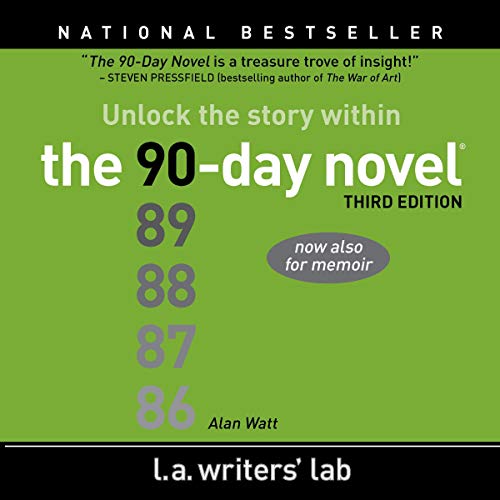 Get the first draft of your novel or memoir down quickly!

The 90-Day Novel is Alan Watt's day-by-day guide through the process of getting the first draft of your novel or memoir onto the page. The 90-Day Novel was workshopped at LA Writers' Lab over the course of 10 years and has helped thousands of writers complete their work.

A number of Watt's students have gone on to become best-selling authors and won major literary awards. Many writers credit The 90-Day Novel as their guide, from YA author Allen Zadoff (The Unknown Assassin series, Little, Brown and Company) to Ottessa Moshfegh (Man Booker Prize Finalist for Eileen, Penguin, Random House). The method was inspired by Watt's own experience. He wrote the first draft of his novel Diamond Dogs in just under 90 days and sold the North American rights to Little, Brown and Company in a bidding war. The book became a national best seller and won a slew of awards including France's 2004 Prix Printemps for best foreign novel.

The 90-Day Novel is structured into three parts. Part one describes the process of getting your story from your imagination to the page and prepares you through a few simple, powerful writing exercises to access the story within. Part two is The 90-Day Novel, a series of 90 daily letters that will guide you through the hero's journey. Writers often tend to get stuck halfway through, mired somewhere in their "idea" of the story. The 90-Day Novel will teach you how and why you get stuck and how to get to the end of your first draft. Part three is a compendium of stream-of-consciousness writing exercises designed to help you access the primal forces in your story.

"Al Watt is a master teacher with a brilliant, intuitive understanding of story." (Allen Zadoff)

"I went out and bought a book called The 90-Day Novel by Alan Watt. It's ridiculous, claiming that anybody can write a great book, and quickly, too, but it ended up as a Oulipian thing...it was actually interesting to conform to the rules." (Ottessa Moshfegh)

What listeners say about The 90-Day Novel