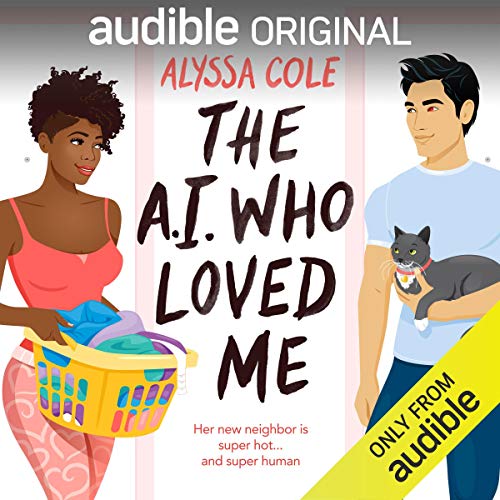 The A.I. Who Loved Me

The A.I. Who Loved Me

With a cameo by Mindy Kaling, Regina Hall performs this captivating romantic comedy with a thrilling sci-fi twist!

Trinity Jordan leads a quiet, normal life: working from home for the Hive, a multifunctional government research center, and recovering from the incident that sent her into a tailspin. But the life she’s trying to rebuild is plagued by mishaps when Li Wei, her neighbor’s super sexy and super strange nephew, moves in and turns things upside down.

Li Wei’s behavior is downright odd—and the attraction building between them is even more so. When an emergency pulls his aunt away from the apartment complex, Trinity decides to keep an eye on him...and slowly discovers that nothing is what it seems. For one thing, Li Wei isn’t just the hot guy next door—he’s the hot A.I. next door. In fact, he’s so advanced that he blurs the line between man and machine. It’s up to Trinity to help him achieve his objective of learning to be human, but danger is mounting as they figure out whether he’s capable of the most illogical human behavior of all...falling in love.

This was a really fun and interesting listen! Alyssa Cole is a new to me author, but I really enjoyed her writing style. I went in blind and found it quite entertaining. The AI Who Loved Me was a bit different than my normal listens, but that only made it more enjoyable. It took me a bit to get invested, but the story really picked up in the second half and I enjoyed the mystery and twist. The best part though, is the full cast narration. It made distinguishing between characters overall easier and the addition of sound effects really enhanced the story. I do wish that the same character would have been voiced by the same narrator throughout though to keep things consistent. For example, there were times that Penny was voiced by Mindy Kaling (love her!) and then others where a different narrator took over. I'm excited to see where the author takes the story next within this world.

8 of 8 people found this review helpful

This is a book unlike any other romance I have come across. It’s rather futuristic, but yet set in a environment I can relate to. I love how the story unfolds slowly as we get more and more information. The computers, or AI’s, talking to each other are so intriguing! Basically, it is just simply a great story!

While I enjoy many types of romance books, including the ones where sex scenes are at least a full chapter, I really enjoyed the simplicity of this book and felt that descriptive sex scenes would have ruined the overall story. I liked the simplicity, yet complexity, of the story! I have become a huge fan of this author!

Regarding the narration, I wasn’t sure that I would like having so many different narrator’s. In fact, I have avoided this book for the last couple of months because of this dislike. But the concept of the book intrigued me so much I finally gave it a chance, and I am so glad I did! The changing voices or occasional sound effects only added to the story, and were in no way jarring.

Don’t overthink it like I did, just get the story! It’s very well written and quite clever! As a sidenote, I am rather picky of a good story. In fact, I deleted the last three romance audiobooks when I was only partway through them. This book kept me involved all the way through. And I want more!

5 of 5 people found this review helpful

This was adorable. Just plan cute as can be! I had no idea I was going to end up being so enamored with such a different storyline. It really could have been the eargasim made possible with a full narrative cast. This is such a fun and fast listen. I was bummed when it was over but I can say this is one audiobook that I will relisten too and I do NOT relisten to audiobooks. Theres just too many, why would I? This one had it all and then some!

narrations was great! The story was rewarding. I laughed, I swooned, and grinned at the end... worth a listen!!!

I like the twist on this love story. The story line kept me guessing. I love the happy ending and the fact that Penny was given a body.

I need a sequel or series

This was so unexpected. What a fun, weird, quirky, sexy story. The voice actors did a phenomenal job. This was such a fun listen!

This is one of the best productions I have heard on Audible. Well done, Alyssa Cole.

New, Hot, SCFI for your Pleasure

I just loved Regina’s voice and the transition of Leiwa’s voice as well. This audiobook was a pleasure to listen to and I can’t wait to listen to more of Alyssa’s books, I may have found my new Favorite writer.

I don’t know quite what I expected when I downloaded this. A simple romcom, maybe, based on the cover and synopsis. What I got was a fully immersive and intelligent storytelling experience which was wonderfully written, and narrated by a group of talented actors. I loved the concept, loved the thoughtful world, loved the sweet romance. And I’m so excited that this’ll be a series!

5 of 6 people found this review helpful