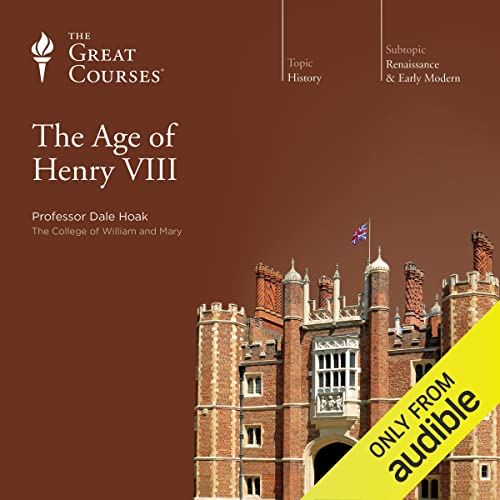 The Age of Henry VIII

Henry VIII, who ruled England for almost four decades, provokes questions. What is greatness? How should we judge character? Who or what can be said to "make" or cause history? England's most famous king ruled an island only about the size of Pennsylvania, inhabited by fewer than three million people nearly 500 years ago - yet he remains instantly recognizable to this day, his barrel-chested and bejeweled figure immortalized by the brush of Hans Holbein the Younger.

In this series of 24 revealing lectures, an honored teacher offers an intimate portrait of the monarch who, in a recent biographer's words, "changed the heart, mind, and face of Britain more than anything between the coming of the Normans and the coming of the factory" - a despot who became an accidental great-grandfather of English-speaking democracy.

You'll learn how Henry gave Protestantism its powerful purchase in the English-speaking world and how, given Britain's later significance in world history - made possible in part by Henry himself - he must be accounted a towering figure of history. The Henry VIII who emerges from these lectures is a man of both great charm and terrifying, self-pitying ferocity. He harbored ruthless ambitions and spun grand schemes, yet in the end was shadowed by the historical irony of expectations gone awry. At the same time, you'll grasp how his reign contributed an important legacy to British history and the modern world. The revolutionary effect of the Act of Appeals was to make law itself, or the king-in-Parliament, the supreme authority. Parliamentary law became the basis of the new constitutional monarchy, and Henry's navy was the first standing military force in his day.

What listeners say about The Age of Henry VIII

This book is a prime example of history being far more far-fetched than fiction could be. I was familiar with all the characters from previous reading, but this has really fleshed them out for me (and made me shake my head over them a lot more than I previously had!).

I didn't listen to it all in one sitting because to be honest, one has to do one's day job sometime. But I did listen eagerly to several hours at a stretch.

Well done all around, and thank you!

Informative if a little biased

The speaker knew what he was talking about but his views were a tad dated. Every generation reevaluated how they view Henry the XVIII's wives and he is from a time where Kathrine Howard-she was really the only one he had something really negative to say-was seen as nothing but a silly little slut. Kathrine asked for the block the night before her execution to practice and her last words were begging for her life, that her family not be killed as well and mercy for her servants. He made no mention how she was first approached by a 23 year old man when she was 13, that he had a key to the Maiden Room where she and other young girls slept, that Francis Derham (her promised husband before Henry) was at first in a position of power over her. When taking all this into account I can't see her as a adulterous floozy. technically nothing he said about her was wrong, but he didn't give the full picture. of course this course is about Hentry not her, but it shows where things were skipped. I think he might like Anne Boleyn and Cathrine Parr best because he went on and on about Anne and talked a lot about Cathrine Parr as well. Of course they had more to be said but the way he talked it was as if Henry was a good man he was praising. I disagree strongly with that so this may be my own biases but to me this is not a be all end all course. I think he just gave a peek into the world surrounding the king and skipped many major points. I'd suggest if wanting to listen to this to also find another lecture about this time and place to get a more complete picture.

Had to stick with it a while

By the end I found I didn't regret having gotten this title, although at first I wasn't so sure. Author's speaking style took some getting used to as he came off as ... pedantic (shall we say) early on. Also, other reviewers have mentioned digressions, which I can understand, but would say that the material becomes more philosophical, or theoretical, than factually-rooted at times. I'll give him credit that it's a different approach to one of the most well-trodden periods in history, as opposed to a recitation of facts without much interpretation which wouldn't work well.
Bottom line: target audience would be Tudor-philes looking for a fix.

Engaging history of a Renaissance Prince

A well narrated series of lectures by Professor Hoak, of this fascinating 16th Century monarch , his challenges and insatiable appetite for greatness and to be seen as Imperial. So many details presented that for me kept me fully engaged throughout all the lectures. I’m sure I’ll repeat some of the lectures again. For anyone interested in 16th Century England, the politics and religious strife that forever changed the course of England, this is a must course.

Among the Worse of the Great Courses

Having read and researched a trove of material on the Tudors, and Henry VIII in particular, I found this GC wandering, often wildly inaccurate, frequently lost in navel-gazing, and generally worth little. While the topic of the impact of Henry VIII and the Tudor monarchs has great import, I believe the GC should include this topic. However, I strongly urge GC to immediately dispose of this course - especially it's babbling professor, who often interrupts himself, even mid-word, to make inane, odd comments; even comments about comments. To fans of the GC series, I exhort you steer clear of this topic until it has a complete remake, and all trace of Professor Dale Hoak scrubbed from the gleaming academic halls of the GC.

Never use one adjective when four will do!

The content is ok but hardly “great”. The organization is scattered. I suspect that Dr. Hoak is not as pretentious as he seems from his lectures, but still this course made for painful listening.

Changing the speed setting to 1.25 improved the tedious, halting narration. How to make the story less boring? Find another historian/author, or read the historical fiction of Hillary Mantel.

I enjoyed this book very much and learned a lot! The professor provided new details about Henry that I did not know about although I have studied him for a while. Great book and insightful analysis!

One of the worst great courses speakers I’ve come across. Lecturer is pedantic, comes across as very condescending. Skip this one.

This is an interesting study of the Age of Henry VIII. The key word in the title is &quot;Age.&quot; This course is not really a biography of Henry VIII. Instead, its an in-depth study of Henry VIII's world. I wish the course had given more biographical information about Henry VIII, though it did give a good overview and focused on certain key aspects of his life. All in all, this was an interesting class. I feel like I now know more about this important time.