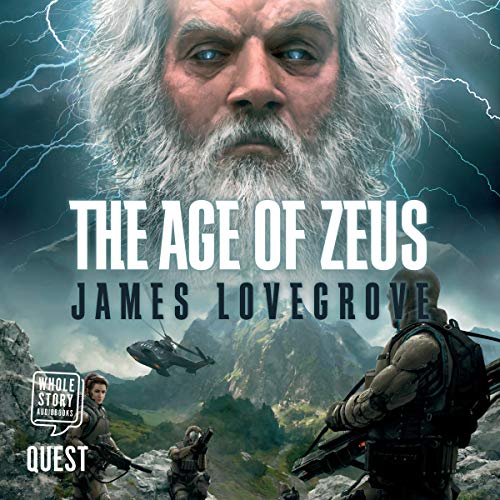 The Age of Zeus

Written by: James Lovegrove
Narrated by: Andy Cresswell
Try for $0.00

The Olympians appeared a decade ago, living incarnations of the ancient Greek gods on a mission to bring permanent order and stability to the world. Resistance has proved futile, and now humankind is under the jackboot of divine oppression.

Until former London Police Officer Sam Akehurst receives an invitation too tempting to turn down: the chance to join a small band of guerrilla rebels armed with high-tech weapons and battlesuits.

Calling themselves the Titans, they square off against the Olympians and their ferocious mythological monsters in a war of attrition which some will not survive.

"One of the most interesting and adventurous British SF writers..." (The Bookseller)

What listeners say about The Age of Zeus

great time. When reading this book the chapters flew by so fast so I was happy that listening to it still felt like the chapters went by fast. Great book can't wait for the age of Odin.

The book is, by and large a fun romp that as long as you take most of the handwavium elements in stride a very good time. The narrator makes the book come to life, and the characters, story and action while all done well don't overstay their welcome, and i honestly truly believe that this may make a good cheesy sci-fi movie. I do like to pick out the parts i don't like for fairness sake and that being said, most of my difficulty with the book is the early part. It didn't catch me as much i would have liked until about hour4 or 5. Whether that is personal or something others may feel i'm not sure, and i'm also not 100% sure why that is. That said, i couldn't put it down past that point and went through the rest of it in a course of a few days.

I really enjoyed this entry in this series. As usual, the narrator’s accents are bit wonky, and I wasn’t a huge fan of the twist, but that aside, this one has people in super suits fighting monsters and gods with super powers. Literally nothing to complain about. Looking forward to checking out the other entries in this series soon.

I absolutely love the other books in the Pantheon series, but this one is my least liked. the "Big Twist" of the story just doesn't sit well with me given how the other books are written. I enjoyed just about every other aspect of the book besides that glaring plot point.

Read the book before and it was a delight. Didn't remember the end, but now I can see why. Good story, but ending seems preposterous. Characters contradict uber intelligence toward the end.

really good I just think it ruined it in parts by all the filthy language over all was a great book.