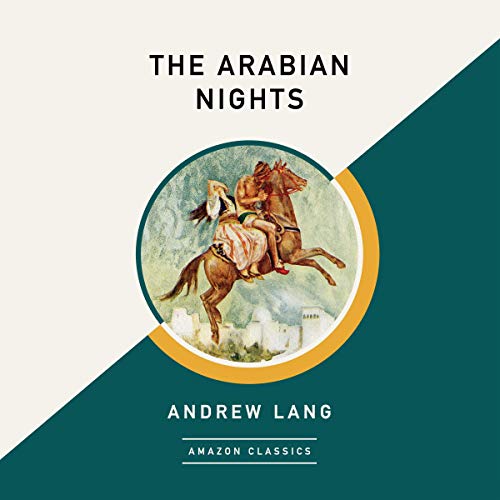 Written by: Andrew Lang
Narrated by: Neil Shah
Try for $0.00

The vengeful King Schahriar agrees to stave off the execution of Queen Scheherazade until she finishes a particularly compelling story. Her plan? Bleed one tale into another. Through fanciful histories, romances, tragedies, comedies, poems, riddles, and songs, Scheherazade prolongs her life by holding the king’s rapt attention.

With origins in Persian and Eastern Indian folklore, the stories of The Arabian Nights have been reworked, reshaped, revised, collected, and supplemented throughout the centuries by various authors and scholars - and are continually redefined by the modern translations of the Western world.

AmazonClassics brings you timeless works from the masters of storytelling. Ideal for anyone who wants to read a great work for the first time or rediscover an old favorite, these new editions open the door to literature’s most unforgettable characters and beloved worlds.

What listeners say about The Arabian Nights (AmazonClassics Edition)

Wow! I cannot believe that I listened to the entire book.

The narration was good, but not much else.

The stories were all greatly disappointing. :(

An amazing book and well worth a listen.

So many wonderful stories from a different time. an amazing book and well worth listening to a few times.

Could Audible not just let us know that this is a middle school appropriate version? As a adult, I prefer the full telling.

Narration was awful. Do not recommend to anyone. Edgy voice acting. Do not buy. Bad

The performance is great, but it states at the beginning that it’s missing stories, including the main story arc of the queen telling stories to the king. I wanted the full tales and this wasn’t it. I’d expect better from an amazon title.

forgettable. just finished, and I dont really recall anything about it. ended up just being background noise.

This is, of course, a wonderful classic tale...however the reading here becomes a bit tedious.

i didnt know what to expect

overall i enjoyed this book, many stories you may know are way diffrent here lol but atillbawesome for the price

enjoyed listing to this.. good

enjoyed listing to this.. good. the narration is great. and story translation is however not that descriptive. like Original.. but still good.

I despise the narration

Not only is this an abridged version, but the narrator has a bizarrely precious affect that is incredibly off putting and makes the whole thing almost painful to listen to. I didn't finish it the first, second, or third time I tried. I love all of Andrew Lang's compilations and this was wildly disappointing. I would skip this and do one of the fairy anthologies that has a variety of narrators instead.

Fun stories from a different age.

The voice reading/acting was high quality and it was nice having so many different stories. It was very interesting hearing stories that had far off but familiar lands.