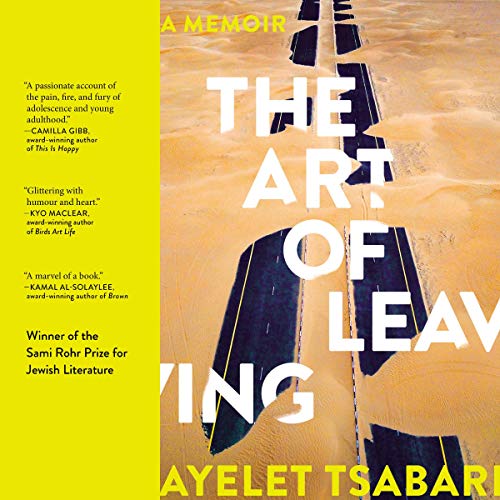 The Art of Leaving

An unforgettable memoir about a young woman who tries to outrun loss but eventually finds a way home.

Ayelet Tsabari was 21 years old the first time she left Tel Aviv with no plans to return. Restless after two turbulent mandatory years in the Israel Defense Forces, Tsabari longed to get away. It was not the never-ending conflict that drove her but the grief that had shaken the foundations of her home. The loss of Tsabari’s beloved father in years past had left her alienated and exiled within her own large Yemeni family and at odds with her Mizrahi identity. By leaving, she would be free to reinvent herself and to rewrite her own story.

For nearly a decade, Tsabari traveled, through India, Europe, the US, and Canada, as though her life might go stagnant without perpetual motion. She moved fast and often because - as in the Intifada - it was safer to keep going than to stand still. Soon the act of leaving - jobs, friends, and relationships - came to feel most like home.

But a series of dramatic events forced Tsabari to examine her choices and her feelings of longing and displacement. By periodically returning to Israel, Tsabari began to examine her Jewish-Yemeni background and the Mizrahi identity she had once rejected, as well as unearthing a family history that had been untold for years. What she found resonated deeply with her own immigrant experience and struggles with new motherhood.

Beautifully written, frank, and poignant, The Art of Leaving is a courageous coming-of-age story that reflects on identity and belonging and that explores themes of family and home - both inherited and chosen.

What listeners say about The Art of Leaving