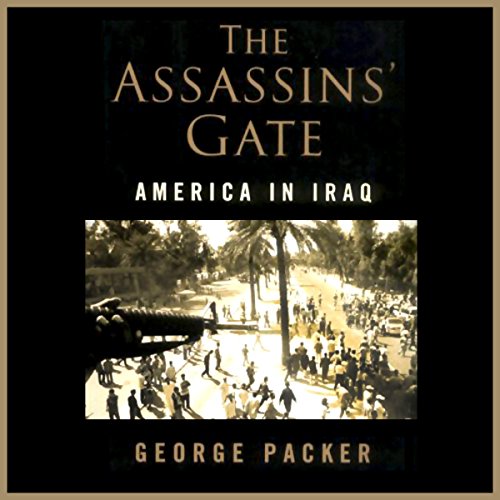 Written by: George Packer
Narrated by: Richard Poe
Try for $0.00

The Assassins' Gate, so dubbed by American soldiers, is the entrance to the American zone in the city of Baghdad. In 2003, the United States blazed into Iraq to depose dictator Saddam Hussein. But after three years and unknown thousands killed, that country faces an escalating civil war and an uncertain fate. How did it get to this point?

Rich in history and political insight, this is an important contribution to the ongoing dialogue over the Iraq War. George Packer describes the players and ideas behind the Bush administration's war policy. He also provides first-hand accounts of the men and women, both civilian and military, coalition and Iraqi, who are caught in the middle of the conflict.

Winner of the Robert F. Kennedy Award, George Packer is a venerated staff writer for The New Yorker with four tours on assignment in Iraq. With The Assassins' Gate, he offers a penetrating work of journalism.

"[A] well-researched, articulate, journalistic account." (School Library Journal)
"Packer shows himself once more to be the best chronicler, apart perhaps from John Burns of the New York Times, that the conflict has produced." (Publishers Weekly)
"It is a pleasure to find a work that strives for balance, fairness, and understanding in surveying the causes and course of the ongoing Iraqi war....This is a troubling but deeply moving examination." (Booklist)

What listeners say about The Assassins' Gate

I've been making a sad trek through some of the books written about the disaster in Iraq. This is the best of the lot. Packer has masterfully combined several books into one: a long historical view, a devastating account of what went wrong, and a deeply empathetic portrait of several people whose lives have been changed by the war. To top it off, Richard Poe gives an outstanding reading performance.

Packer is a very observant and astute journalist. The Assassin's gate will give you an excellent impression of the human experiences were like in Iraq and how strategic decisions affected them. Generally he is not partisan or bias.

The book gives great insight to the Iraq conflict and should be read (or listened to) by all Americans. The book has stories about average Iraqis, and how their attitudes towards the American occupation changes overtime. Packer points out that as mistakes where made, trust on both sides was lost. The problems in Iraqi have been brewing for decades to centuries and will not be easily resolved.

Lots of Facts for Subpoenas! Boring to Outsiders.

Ok. So Packer certainly confirmed my suspicions. Cheney got what he wanted -- a war in Iraq at all costs. No big surprise, I suppose.

What did surprise me was the detail he throws at the reader/listener -- it makes it tough for someone not to believe he did his research. But then I'm left wondering how could he be so intimately connected with SO many inside meetings and discussions. Obviously this guy is connected. Or he is filling in the gaps with his theories?

This book was unboubtedly written to settle a score -- set the record straight. He certainly will have made some enemies, and perhaps burned a few of his very important future-book-research sources.

However, I'm one of those 298 million that live OUTSIDE the (Washington) beltway, and admittedly not "in the know" about the who's who of Washington insiders. Accordingly, much of the facts of the book started to drone away in my ears and I found myself less and less likely to want to turn this tome back on. Being just a "Meet the Press" sort of political junkie, I don't really have enough of a personal knowledge of the cast of characters (and certainly not first-hand) as he does. If I WERE one of the 150 or so of the people he mentions, perhaps I would be more interested.

To be sure - I believe he lays out enough detail that a democratically controlled congress may finally have their way in nailing some of these arrogant so-and-so's (please, please get Cheney first!). There is ample fodder for subpoenas here. But that's the problem with the book - it is less of an engaging and riveting story and more of a listing of who to prosecute and in what order (which I applaud).

I rate this book a major bore -- unless you're a political fanatic (likely democratic), you may not finish it.

A Fine View of the War in Iraq

Part history, part memoir, this book details the utter folly of the Bush administration in underestimating and ultimately destroying the country of Iraq through lack of planning, unrealistic vision and lack of understanding of the consequences of the toppling of the Saddam regime. It is a sad commentary on the stupidity and ignorance of the top officials of the bush administration and a president who was oblivious to the reality of what he did and his utter failure to plan for the inevitable. Mr. Packer writes well, and his vision is more balanced than one would expect. That makes his commentary and conclusions even more poignant. The decade since this book was written has not diminished his conclusions.

If you liked/respected Fiasco...

This is one of those books that will require the author to rewrite the foreword for it with every re-release...I really think this (audio)book is a easily digestible but very scholarly work. The reader isn't too somber but serious enough to respect the subject matter. (If you can hear it there are a few instances where you can hear the reader take a sip of water and resume reading....kinda personal in a good way)....The chapter breakdown is great too...If only all audio books were broken up into as many sections.....
If you think there are too many books out on Iraq...read 3. This one, Imperial Life in the Emerald City, and Fiasco...I hear Cobra II is pretty epic...but c'mon it costs 2 credits!

All in all a great balanced read that provides a ideo/philosophical backdrop for what the (hell) the policy planners were thinking.

this was a good book. I like the drama and the narration and story or expertly done. haunting and riveting Cigna on soldiers service and this time the same high level talks at the Whitehouse.

The book was well written and it gave me a look into the war from all sides. I have a picture of the guards of said gate in a 20 x 30 size that was sent to us.

worth a second listen

If you want to understand what went wrong in Iraq, this is a good place to start. Packer begins in Iraq and backtracks to Washington where the neocons are busy trying to con the American people and stifle their critics. One of the most moving sections is devoted to a family who has lost a son in Iraq and is left wondering who and what to believe.