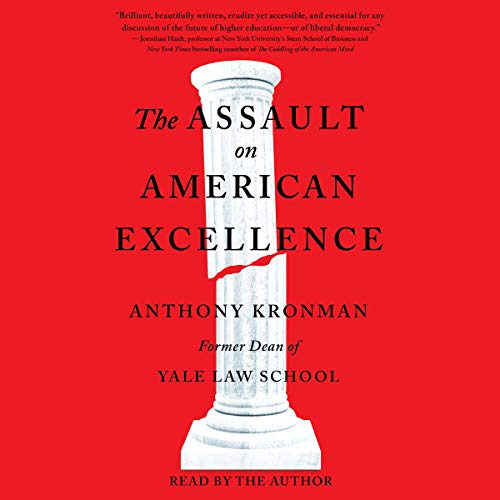 The Assault on American Excellence

“I want to call it a cry of the heart, but it’s more like a cry of the brain, a calm and erudite one.” (Peggy Noonan, The Wall Street Journal)

The former dean of Yale Law School argues that the feverish egalitarianism gripping college campuses today is a threat to our democracy.

College education is under attack from all sides these days. Most of the handwringing - over free speech, safe zones, trigger warnings, and the babying of students - has focused on the excesses of political correctness. That may be true, but as Anthony Kronman shows, it’s not the real problem.

“Necessary, humane, and brave” (Bret Stephens, The New York Times), The Assault on American Excellence makes the case that the boundless impulse for democratic equality gripping college campuses today is a threat to institutions whose job is to prepare citizens to live in a vibrant democracy. Three centuries ago, the founders of our nation saw that for this country to have a robust government, it must have citizens trained to have tough skins, to make up their own minds, and to win arguments not on the basis of emotion but because their side is closer to the truth. Without that, Americans would risk electing demagogues.

Kronman is the first to tie today’s campus clashes to the history of American values, drawing on luminaries like Alexis de Tocqueville and John Adams to argue that our modern controversies threaten the best of our intellectual traditions. His tone is warm and wise, that of an educator who has devoted his life to helping students be capable of living up to the demands of a free society - and to do so, they must first be tested in a system that isn’t focused on sympathy at the expense of rigor and that values excellence above all.

What listeners say about The Assault on American Excellence

For Whom is He Writing?

This is a timely, cogent, and important book, warning us that the integrity and mission of our higher learning institutions are at risk of succumbing to the transitory ideologies of democratic mob-rule (sorry to the author if that explanation was inelegant). The Assault on American Excellence is a journey through the foundational underpinnings that fostered the mission(s) of our great American universities. I was deeply enthralled by the depth of research and breadth of the citations that carry Kronman's argument.

That said, I kept asking myself for whom is Kronman writing? This book is not for the timid, or the uninitiated. If I were one of the underclassmen about which he generalizes in this book, I might be hard-pressed to get through his work. It is not until the last two chapters that I felt really connected to his premise. That's because the language upon which Kronman makes his point is so loaded with elitist baggage (my bias here) that it is difficult to separate the message from the messenger. I wish he had not (but I understand why he did) describe to beneficiaries and participants in elite university learning as *aristocracy.* Sure, he explains the context for this descriptor, but in the current political climate the unenlightened may perceive this work as a treatise on anti-democratic consolidation of power amongst elites of wealth and privilege (speculation here). That's why I question for whom he wrote this book. Is it a finger in the eye of former colleagues at Yale? Or, is it a pat on the head for all the new young radicals on today's campuses to let them know that they are (after all) merely yet-to-be-enlightened children.

Please read this important work. It will send you back to your bookshelves to reread many of the great 18th Century philosophers upon which the foundations of our democracy are fabricated.

1. Restrictions of free speech on campuses in the name of inclusiveness and welcome.
2. Diversity as a value in itself, defined as it is today in terms of identity groups rather than individuals, approached from an interesting legal/historical perspective; in this his tenure as the Dean of Yale Law School is not irrelevant
3. The renaming of historical memorials, approached with special passion in view of Yale’s wavering course to renaming Calhoun College.

I liked this book, and his arguments for the most part resonate with me.

A central theme of this book, though, is hard for me to swallow; this involves his use of the term aristocracy. As defined by the author, aristocracy refers to the fact that not only are some people better at doing certain things than other people, but some people are just Better, better at being human beings, more highly developed in the areas that really matter in terms of living as a human being. This issue of aristocracy is made absolutely central to his critique of the three political/social trends mentioned above. Not surprisingly, given the book's focus on the academy, these areas that matter turn out to be coincident with the areas of interest in the Humanities. Although it is not stated explicitly in this book, the humanities historically involve the scholarly study of language, history, literature and moral philosophy. The study of these tends to lead to a larger, better way of living as a human, it is implied. I do not disagree with this, and yet there is something stuffy, narcissistic and claustrophobic about the implication that this type of study is the one true path to being a fully developed human. It seems obvious to me that there are many outside the academy who know something about how to live as a human, and that they learned it in other ways; farmers, sea captains, battlefield commanders, Buddhist monks, and wise grandmothers come to mind. I do not mean that "everyone is just as good as everyone else"; I just don't believe there is only one kind of Best, or that academic humanists are necessarily the top of the heap.

I think, though, that even readers who don’t agree with the general drift of his arguments will find it hard to take issue with any of the specific, finely reasoned points he makes. Any fair reader will I think will find it hard to dismiss his authoritative credentials or his sincerity and passion for the subjects at hand. He deserves to be listened to, he knows what he’s talking about and he wants so very much for us to understand.

Let me start by saying the author is a good man (assuming that’s his preferred gender pronoun!). That being said this book appeals to the new liberal generation, highlights the hypocrisy of the left, and essentially attempts to keep the house of cards from falling down. Unfortunately it is this authors and colleagues teachings that have created the mess they are in right now. This book fails to make the obvious connections that are obvious to conservative readers. I hope it is successful in converting a few far left professors but I am afraid the damage as been done.

I was really looking forward to hearing this book read by the author but someone should have said to the man, "you can write but you definitely can't read for an audio book." He is far too close to the mike and pops most of his consonants. His cadence is grossly affected as he pauses ever time. He thinks. There should. Be a pause. For some. Unknown. Reason.
I couldn't finish it as it was too irritating for me. He may be decent in the classroom but not here.
It's unfortunate as I am very much interested in this topic and normally can struggle through something as bad as this but not this time.
A note to Audible, please make the tough call on authors and get a pro if they are not of the highest standard.

I find the book confusing in its main premise. I am coming from an ex-communist country where universities are still breeding dissatisfaction with democracy as a result of the lost prestige that professors enjoyed in communist times. This is masked exactly as spiritual aristocratism, but is a poison administered cynically to students who are thought to distrust businessmen, politicians, basically anybody enjoying the prestige 'stolen' from the red philosopher kings. I have also seen in developed democracy academic figures administring the same poisonous pill. So deeply suspicious of universities as only passive receivers of un-aristocratic ideals from the political sphere.

Other than that - spectacularly honest and intellectually and morally rewarding book.