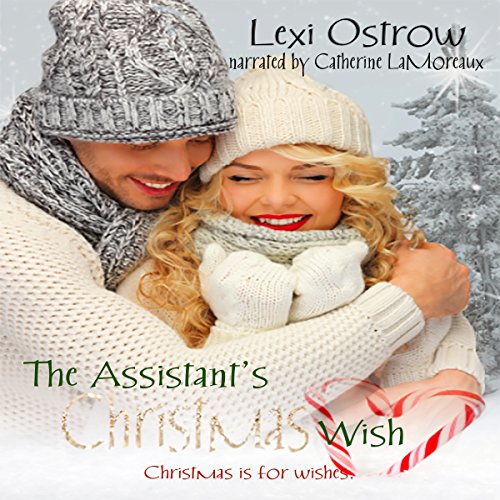 Written by: Lexi Ostrow
Narrated by: Catherine LaMoreaux
Try for $0.00

Leena has been in love with her boss, Nick DeMarco, for almost eight years. But he's never given her any indication that she was special to him. Their relationship was close, but rarely outside of a business function. So when he invites her to be his fake girlfriend at his family's Christmas week she is thrilled and ready to show Nick just what he's missing out on, her only wish for the Christmas season.

Nick wouldn't admit it to anyone except his brother, but his assistant Leena is the only woman he's had feelings for in quite some time. He didn't want to seem like a powerful boss trying to seduce his employee so he had ignored his desire for her for the past five years. When the opportunity to take her to his family's chalets opens he takes it, intent on seducing her.

When things begin to heat up with Leena and Nick, both are pleasantly surprised. But a winter storm traps them in the chalet just as Nick's older brother Jake arrives. When he makes no attempt to hide his attraction to Leena the whole vacation becomes heated. What will happen when the storm lifts, will the assistant have gotten her Christmas wish?

What listeners say about The Assistant's Christmas Wish

I’m usually able to find the good in anything. Like- hey! The cover is great! Is about as much as I can give on this. Usually, my reviews are as spoiler free as possible. This one is not gonna be.
So, I assumed this was gonna be the normal falling in love with the boss trope or thinking you’re in love with the boss until you meet his brother and then you realize that he is the one you should be in love with. Nope. About 1/4 way in I went to “ok, I bet they’re going to share her” and again no.
The girl is all I’m in love with my boss.
The boss is in love with her.
The boss’s brother is all in love with her.
Now- the brother has only had a couple conversations with her and one face to face meeting if I understand correctly. She has very little interest or recollection of the interaction.
She sleeps with both of them randomly.
They kind of argue over her. Not like knock down drag out. Just like argue. Then, the boss is like “yeah, I’m not interested in going to do that so you take her” knowing he’s sending her out with his brother. Who wants her. Heck, who he just caught kissing her 25 mins ago. Yeah. That’s gonna go great.
Basically, everyone is just stupid.
Notice, I’m still giving it 4 stars, right? You are going “why 3-4 stars?”
Because people are flawed and stupid in real life. I honestly know girls who probably would sleep with two different guys in a couple days.
Because 55% of the books in the romance category are instalove and it happens. Because it’s not a horrible book. It’s just the type of book where, if it wasn’t existing inside of your phone, you would toss it at a wall. Because I still finished it- even though I knew it was ridiculous. It’s still more real than some other crap I have read. So- 3-4*.

A Steamy Romance for the Holidays

Would you consider the audio edition of The Assistant's Christmas Wish to be better than the print version?

I have not read the print version.

That's a toughie. They all had different qualities to them. I could relate a bit to Leena. Nick was yummy. Jake... hmmm... I'm going to pick Jake. He's a honey with a lot of geeky cuteness to him. I can't say no to that.

I think I yelled out "Pick one!" a few times. I may have cooed once or twice too. And I know I blushed.

I'm not normally a romance book kinda person but this book was really good. The story line was not what I was expecting at all. It took me by surprise with some of the decisions the characters made. But in the end love wins. A very good read you go in expecting one thing, and it comes out a whole different way.

I listen to books all the time and rarely write reviews. I had to tell Amy unsuspecting listener to be sure you preview the voice of this particular narrator BEFORE you buy this book. She has an annoying voice but the WORST is that she screams the story. The story was sweet, but I gave up after 4 chapters and went to the end to hear which brother won.

the reviews are all correct

the story is juvenile and the narrator is worse. pass on this audio book. it's like listening to nails on a chalkboard

I tried to endure through to the end but I just couldn't. I have heard of love triangles but sleeping with one brother one night and crawling in the bed with the other brother the next is over kill. Then there's the narrator... sounds like a robot is reading with a nasally voice. The book is short but they so prolong it at the end.

No suspense, no thinking... no wonder....boring

There was no suspense. The only question you had was how they told everything to everybody and it never got back to either of them. Very low class and tacky. Couldn't read or listen to entire story.

Narrator is horrible and writing is juvenile

The Narrator is horrible, like she is reading to kids, and her voice is off putting to say the least.
The story, even for being what it is, utter mind fluff (I rate by what they are, you can't rate Twilight using the same scale as The Illyad) its almost painfully childish.

Narrator of audio version is a screecher

Story is good. The audio version is awful. The narrator screeches through the story. I'm glad I borrowed it on Audible Escapes and did not pay for it or use credits on it!

Nothing good to say...

I had hoped this would be a sweet, Sunday afternoon read, unfortunately, it was actually grating and annoying. First, the narrator's voice is like nails on a chalkboard! Her inflections for the female lead's voice sounded like she was doing baby talk in a bad porn flick. Her interpretation of the male leads was non-existent. Usually, I can get passed a bad narration if the storyline and characters are good. Sadly, this book had no redeeming qualities to save it. The lack of development of characters and the vapid dialogue was only the beginning. The male leads are brothers, and they have no respect or loyalty to each other. They care only about wanting the heroine for themselves. The heroine is an idiot. She is incredibly shallow and sleeps with each brother within 48 hours of each other! She can't decide which one she wants, and has no idea how she feels or how to should choose. Supposedly she is a strong, smart woman, but from what I can tell she is a wishy-washy shallow moron with a serious lack of morals and loyalty. I don't usually rip a book like I have this one, but I felt I needed to warn prospective readers who are looking for a happy story with decent characters and a half way decent plot that this is not the book for them! It does have a HEA, but by the end of the book the only HEA I would have liked is if the heroine's plane had gone down on her way to France!