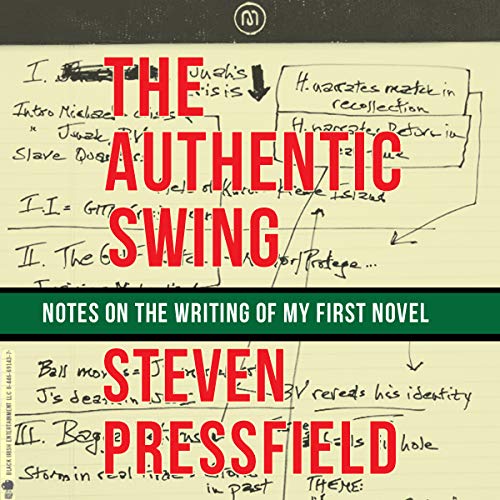 The story behind The Legend of Bagger Vance

If you've listened to his books The War of Art and Turning Pro, you know that for 30 years Steven Pressfield (Gates of Fire, The Afghan Campaign etc.) wrote spec novel after spec novel before any publisher took him seriously. How did he finally break through? Ignoring just about every rule of commercial book publishing, Pressfield's "first" novel not only became a major best seller (over 250,000 copies sold), it was adapted into a feature film directed by Robert Redford and starring Matt Damon, Will Smith, and Charlize Theron.

Where did he get the idea? What magical something did The Legend of Bagger Vance have that his previous manuscripts lacked? Why did Pressfield decide to write a novel when he already had a well-established screenwriting career? How does writing a publishable novel really work?

Taking a page from John Steinbeck's classic Journal of a Novel, Steven Pressfield offers answers for these and scores of other practical writing questions in The Authentic Swing.

What listeners say about The Authentic Swing

Great message, but golf as a metaphor bores me

Love Steven Pressfield and his works. This one had me on the fence, mostly because I find golf dreadfully boring, and he uses the sport as a running metaphor throughout the book.

While "The Authentic Swing" never promised to be a tutorial, or step-by-step combat plan for being a creative badass, it reads nicely as what it's meant to be: a mini memoir and a collection of notes / reflections from an artist taking his first real shot (his first "authentic swing") at his dream. He has some lovely words of encouragement for the artist who is unsure about taking the leap, and this book would actually be a really wonderful first introduction to Pressfield's amazing and ass-kicking library of writer's tools.

But the first lesson we all need to learn? To swing our own authentic swing and to walk in who we are, hand in hand with our Muse.

Loved this great and honest narrative of novel writing. I highly recommend it and encourage any young aspiring author to read.

An indepth look at the Spiritual side of writing.

Pressfield I'd a guru. in the traditional sense.
The Authentic Swing is a book about how the Bhagavad Gita inspired the book The Legend of Bagger Vance. Pressfield relates the emotional and spiritual craft of writing to golf and the concept of self discovery.
In short, he makes the complex understandable and authentic.

I love this man. His writing, his inner battles, his understanding, his impact, his teaching.
No waste talks..perfectly given story.

Thank you for this one.