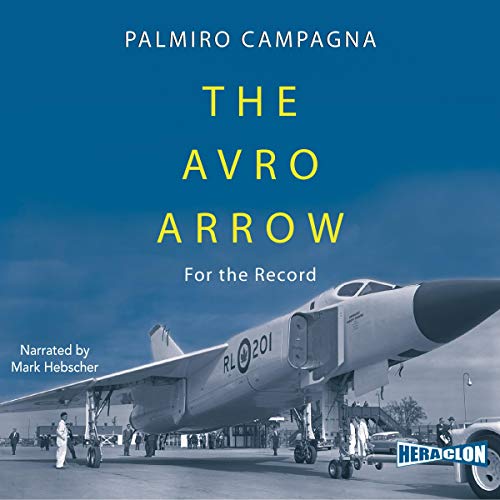 Written by: Palmiro Campagna
Narrated by: Mark Hebscher
Try for $0.00

Declassified government records shed additional light on the cancellation and subsequent destruction of the Avro Arrow.

The controversial cancellation of the Avro Arrow - an extraordinary achievement of Canadian military aviation - continues to fire debate today. When the program was scrapped in 1959, all completed aircraft and those awaiting assembly were destroyed, along with tooling and technical information. Was abandoning the program the right decision? Did Canada lose more than it gained?

Brimming with information to fill in gaps in the Arrow's troubled history, and with an update on the latest search for the scale models launched deliberately into Lake Ontario as part of the test program, The Avro Arrow tackles the outstanding questions head on.

What listeners say about The Avro Arrow

For Avro Arrow Fanatics Only

As much as I like the Avro Arrow and as sad as its cancellation was, I simply cannot listen to six hours of someone reading 60-year old government documents verbatim. I kept hoping there would be something novel, exciting or even mildly interesting, but no such luck. We all know the Arrow was a fantastic plane, more advanced than anything else in the world, and would have done wonders for Canada's reputation and it was too bad it was cancelled. But six hours of narration about the tiniest minutiae is simply too much.