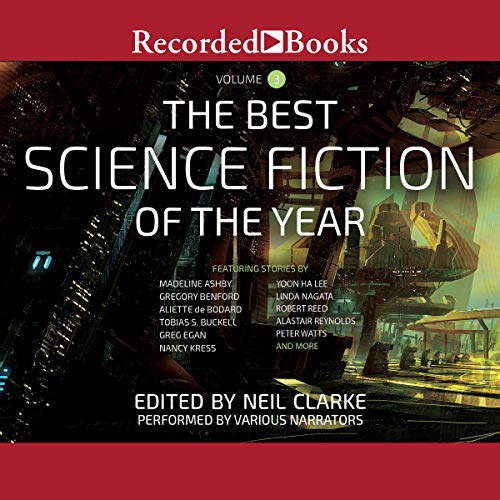 The Best Science Fiction of the Year, Volume 3

As Earth dies, an architect is commissioned to remote build a monument on Mars from the remains of a failed colony; a man who has transferred his consciousness into a humanoid robot discovers he's missing 30 percent of his memories and tries to discover why; bored with life in the underground colony of an alien world, a few risk life inside one of the whales floating in the planet's atmosphere; an apprentice librarian searching through centuries of SETI messages from alien civilizations makes an ominous discovery; a ship in crisis pulls a veteran multibot out from storage with an unusual assignment: pest control; the dead are given a second shot at life, in exchange for a five-year term in a zombie military program.

For decades, science fiction has compelled us to imagine futures both inspiring and cautionary. Whether it's a warning message from a survey ship, a harrowing journey to a new world, or the adventures of well-meaning AI, science fiction inspires the imagination and delivers a lens through which we can view ourselves and the world around us. With The Best Science Fiction of the Year: Volume 3, award-winning editor Neil Clarke provides a year-in-review and 27 of the best stories published by both new and established authors in 2017.

What listeners say about The Best Science Fiction of the Year, Volume 3

Way too much personal conflict. Not enjoyable.

The best science fiction of the year? I hope not. These stories, and I plowed through more than half the chapters, are rife with annoying personal arguements. Not plot advancing conflict. Not meaningful character development. Obtuse "bosses" belittling coworkers. Family squabbles. Bullies beating up a guy. Blasé.
The bulk of the many stories I listened through lacked imaginative science or compelling explanations (with a couple of exceptions) for circumstances leading to the wearing, whining strife, physical fights, wars. I expect far more scienctific speculatiion from science fiction than this anthology offers.
Few characters succeeded or failed to meet meaningful challenges impacting a whole. There was little plot tension.
The compromised sound quality doesn't help. Letters "s" sound like harsh "sh"". Letters "c" crackle. if you're a brand new listener of science fiction, worn out devices aren't so likely to seem worn out to you.

About a third of stories were quite good, but I’ve already heard than in other anthologies or on podcasts. The remaining 2/3 were extremely boring— at least as they were read by this narrator and his monotonous voice. My all time favorite narrator is Stephen Rudnucki. If he’s the stand and I’d score him as. ten, then this book’s narrator is about a 2. If Amazon is going going to sell it’s audiobooks through subscription (which only gets you one credit), then audible costs more per year than prime. The should demand high-quality productions from the producers before selling to consumers. Or have a bargain basement where all the low production books go, so you’re not paying as much for a book that is almost painful to get through as you’d pay for books of higher quality.

This was an interesting listen, in that the stories ranged in a wide imagination.

The narrators were wonderful and the stories were fantastic! This was well worth the purchase!

Some of the narration was too breathless but otherwise well done. I particularly liked the last two stories about spacefaring robots.