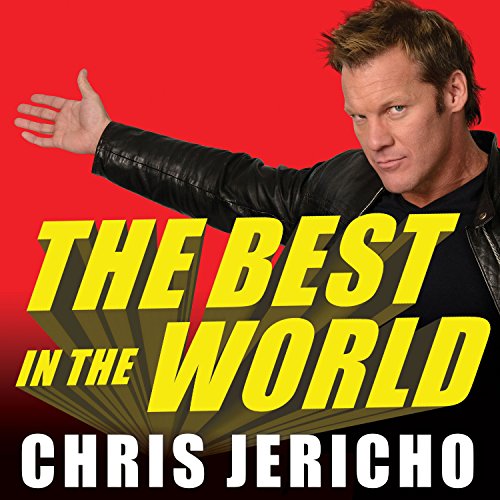 The Best in the World

World Wrestling Entertainment has named Chris Jericho one of the top 10 wrestlers - and one of the top five talkers - of all time. Certainly, the past six years have been spectacular for Jericho. After a sluggish return from his 2005 sabbatical, Jericho found new inspiration in watching No Country for Old Men. and completely reinvented his character - ultimately going on to capture three world WWE titles.

The Best in the World chronicles some of the incredible and often preposterous highlights of Jericho's recent career, including how Mickey Rourke challenged Jericho to a match then backed out; his escape from the 2010 Icelandic volcanoes in a broken-down, European rental-car shuttle; his encounters with Bob Barker, Ozzy Osbourne, Metallica, Al Sharpton, and Mike Tyson; and his on-again, off-again relationship with WWE chief Vince McMahon.

What listeners say about The Best in the World

Enjoyed this very much!

Great listen, it was funny how the narrator pronounced Mike Chioda and calling Mysterio's 619 the Six Nineteen lol. but I don't blame the narrator if they are not a wrestling fan. but that's me being picky. Great job Mr. Jericho, from Winnipeg, not Toronto!

Could use a better narrator for the audio book. Overall very entertaining book from Y2J.

just let Jericho do it

Jericho being read by someone who isn't Jericho is terrible. No offence to Roger as I imagine he's good reading anything else. Just not Jericho's books

The book is fantastic. The person narrating it could of done his homework a bit more. Took away from it a bit. Chris Jericho’s most recent book is narrated by him tho. So I suggest giving that one a shot first

Among the Best Wrestling Autobiographies

Would you consider the audio edition of The Best in the World to be better than the print version?

Yes because I only had to listen.

What other book might you compare The Best in the World to and why?

Mick Foley's books. They are very similar in humor and story telling.

Which character – as performed by Roger Wayne – was your favorite?

I did listen in one sitting and enjoyed it immensely.

Drinking orange juice while listening to tales of a wrestler's trunks coming off mid-match can be painful to your sinuses.

Good book for the wrestling fan. Lots of good stuff from one of the greatest ever. But some of the routine out-of-the-ring antics of "The Best in the World at What He Does" really shines a light on why he makes such a great on-camera villain.

Quite fun and an entertaining

okay so I'm at the biggest wrestling fan anymore but I quite enjoyed the book. As it's quite decently well written and is more about Chris Jericho as a person more then the wrestler. Although I do wish audible had more of the older books as some of the ones from The attitude era we're quite good. If you're a fan of wacky and interesting stories then you will probably enjoy the book. Even if your not a fan of wrestling; still might enjoy the book as it's quite amusing and entertaining.

A fun look inside Jericho life

As the title said, its a great listen for fan of wrestling, Y2J, and has a great narrarator.

This was better than I expected it to be. I laughed out loud more times than I expected and had a grin on my face almost constantly while listening. Thanks to Chris and Roger for the entertaining time.

Loved this book!! Narrator was top notch, much like the Author and subject!! Fantastic read, will definitely be reading over again!! Y2J 4Life!!

One of the all time greats!

Loved it! Chris Jericho has been a major influence in my life. 2 weeks before my dad passed away I won an autographed FOZZY CD by answering a question on WWE Byte this. The day of the funeral came and before I left out I checked the mail and man let me tell you his album All that remains was the only thing I listened to for a year. This book and his others are all incredible and full of amazing stories! Worth the read and listen

An enjoyable listen about Rock and Wrestling

Chris has definitely crammed a lot into his life. His ability to tell his stories makes listening to this book so enjoyable to listen to it over and over again. It's like sitting with a buddy listening to him tell the same stories again and again and loving them as much as the first time you heard it. Great job Chris!

You don’t even have to be a Jericho fan to appreciate these great stories. The book is as if we are sitting in a room together just talking. Amazing story teller.