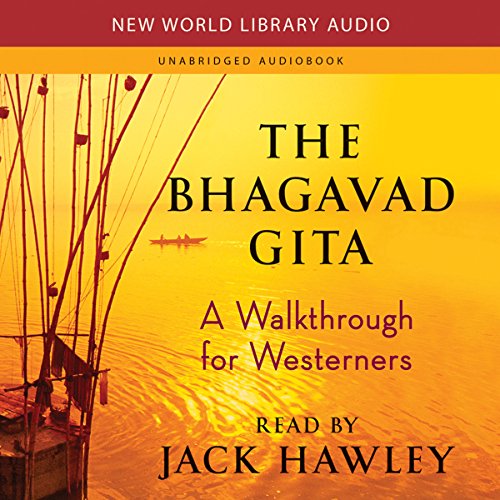 The Bhagavad Gita has been called India's greatest contribution to the world. In this audio version of his classic book The Bhagavad Gita: A Walkthrough for Westerners, Jack Hawley makes its wisdom clear to Western seekers.

What listeners say about The Bhagavad Gita

I always find The Bhagavad Gets brings me peace, whenI read it. I enjoyed this recorded version. Easy to listen to and well presented. I recommend it.

was easy to listen to and authentically read. I enjoyed learning about these amazing Eastern ideas which carry so much similarity to western Christian values (not dogma). gave me lots to think about and even more to change. loved it.

It's good, but not great. The "translation" takes too many liberties... colloquializes too much.

What was one of the most memorable moments of The Bhagavad Gita?

I liked that the speaker was clear. However, I did not like the speaker's repetitive overemphasis.It made the delivery seem cloying. A professional reader should have been used.At various points the reader made Sri Krishna sound almost condescending. That is not at all a part of Sri Krishna's attitude.

Did The Bhagavad Gita inspire you to do anything?

The Gita is very inspiring, elevating. It prompts the reader to self-examination and improvement.

All in all the "translation" and delivery mar the grandeur, intellectual depth and expansive spirit of the original work.Though I think the author/reader made a noble attempt, with good intention.

The Bhagavad Gita: A Walkthrough for Westerners

I really loved this. The author reads his own work here, and he does a very good job. He has a pleasant voice that seems suited to the material. It is not a literal translation word-for-word, more like a distillation in modern English and with the intent to explain the Bhagavad Gita to westerners in particular. He explains the concepts and some of the vocabulary, which I found helpful. There is a sort of soundtrack to the reading, which I did not find intrusive and which I actually thought added something to it - I liked it - but I think some people may find it distracting, so listen to a sample before you buy it. Overall the sound quality was pretty good; I heard papers rattle occasionally, but I became so interested in the material itself that I stopped noticing it if it continued throughout the book. I would recommend this work to anyone who is interested in learning about the Bhagavad Gita or in world religions and beliefs. As soon as I finsihed it, I started it again, because there is a lot to it, and I was fascinated. I wish I'd found this when it was first produced.

Great intro to the Gita but sleepy performance

I can 100% recommend the book as illuminating intro to the Gita .
However I will not listen to this book again as its audio (monotone reading and constant background noise/music) is not very appealing.

get rid of the backgound noise

The Bhagavad Gita is one of the true classics, and I was so looking forward to this. However, the background noise of music that is poorly mixed relative to the message kept interfering with the narrator's voice.

The voice was weak enough that they should have gotten a professional narrator instead of hearing the author grate on. The mix though was so wildly inappropriate it gave me a headache. What could and should have been a joy was ruined by these very poor production judgments.

Please re-record this book with a narrator with a resonant voice who has a sense of how how ro read for an audience...and by all means, lose the annoying background noise!

While difficult to date, the Bhagavad Gita is generally accepted to have been written well before both the Christian Bible as well as the Buddha. Some place it as far back as 4000 years or more. Academically, it is not generally dated that far back, though. Its relevance to the present day is that it supposedly contains universal truths.

People can believe what they want to believe and it makes little difference to me. This review being written in a supposedly Christian nation, however, my personal opinion is that all Christians should be required to read the Bhagavad Gita at least once in their life. Why? The carefully crafted version of history that was -- and still is -- spoon fed to Christians is that anyone in ancient times that wasn't a Christian was sacrificing babies on alters. That Christians think they have a monopoly on The Truth is somewhat of an understatement.

That said, "The Bhagavad Gita: A Walkthrough for Westerners," by Jack Hawley, would make a fine choice for a first time reader. The audiobook, read by the author is superb, as well. I normally cringe a little bit when I see an author read their own book, but in this case, Hawley did a great job. I can't imagine the book being read by anyone else.

The amazing thing about this translation is that it speaks to you as if it was written last week, not thousands of years ago. And just what wisdom can be found in these ancient texts that is relevant to today?

Note the following words on diet and eating:

[K]now that there are subtle elements in food that significantly influence the mind ... Tamasic people eat old, overcooked, stale, tasteless, impure, and dead food with no nutritional value.

As of this review, America is second only to Mexico as the most overweight nation in the world. We are looking at the fruits of eating old, overcooked, stale, tasteless, impure, and dead food. Our hospitals overrunneth. By just moving away from America, you could cut your risk of cancer by up to 200%.

A few years ago, U.S. News and World Report used an independent panel of 22 experts to rank the best diets. Many were surprised that the Raw Food Diet won second best weight-loss diet (a raw food diet is a nutrition plan that is based on uncooked, fresh and live...mostly plant-based foods).

Even more surprising is that thousands of years ago, the hazards of eating dead, overcooked foods was not only known, but written about. And here I was thousands of years later being surprised something that old is still relevant. It's almost as if I stumbled upon a universal truth or something.

Anyway, whenever I think about Bhagavad Gita, I'm always reminding of the movie The Razor's Edge, with a very cold Bill Murray sitting in a hut somewhere on the Himalaya mountains, while on his vision quest. At some point, he became so cold that he ripped the pages from the old copy of the Upanishads he was reading and used them to build a small fire. Maybe I'm wrong, but I always took that to mean that he figured out: there is only so much you are going to get from a book.

I think at some point, the spiritual was supposed to be experienced, not simply read. The Bhagavad Gita should be read, but don't let it be the end of your journey...

Where does The Bhagavad Gita rank among all the audiobooks you’ve listened to so far?

It was my second audiobook, and it was fantastic.

When the author talks at the end of the book of his personal experience and how the teachings of the Bhagavad Gita helped him and his wife.

A book I will surely listen to again.

The BEST Version for Americans or Beginners

Jack Hawley does an incredible job making this sacred book accessible to everyone.

Other translations of the Bhagavad Gita can be very intense and hard to grasp. This one is a smooth read, and Jack Hawley makes the difficult concepts easy to understand.

Not the best reading, and the story is ancient so not the most absorbing text. The ideas and philosophy are interesting for those unexposed

A great interpretation of a legendary story

For something as complex and historied as the Mahabarata, it is fantastic to hear a clear and educational version of the Bhagavad Gita. The assistance in understanding terminology is very helpful throughout. The personal anecdotes add a significant value to the overall experience as well.