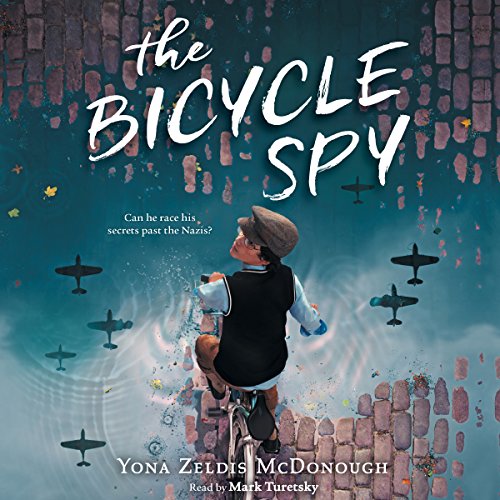 Can Marcel make the ride of his life?

Marcel loves riding his bicycle, whether he's racing through the streets of his small town in France or making bread deliveries for his parents' bakery. He dreams of someday competing in the Tour de France, the greatest bicycle race. But ever since Germany's occupation of France began two years ago, in 1940, the race has been canceled. Now there are soldiers everywhere, interrupting Marcel's rides with checkpoints and questioning.

Then Marcel learns two big secrets, and he realizes there are worse things about the war than a canceled race. When he later discovers that his friend's entire family is in imminent danger, Marcel knows he can help - but it will involve taking a risky bicycle ride to pass along covert information. And when nothing ends up going according to plan, it's up to him to keep pedaling and think quickly...because his friend, her family, and his own future hang in the balance.

What listeners say about The Bicycle Spy

My 9yo boy loved it!

We listened to this on the road for our family vacation. My kids loved it, especially my 9yo son who was disappointed whenever we turned it off for a break. It prompted great conversations about what was happening in France during that time in history.

Personally I felt that the voices of the different characters could’ve been more varied, but my kids didn’t seem to mind. They easily kept up with which character was talking. :)

We loved it. It was interesting and provided historical insight. They characters were all well thought out and realistic. The plot had twists and turns which made it even more intriguing.

I would recommend this to everyone I know

listened every morning's with my child and was very entertained. quick read. we like it