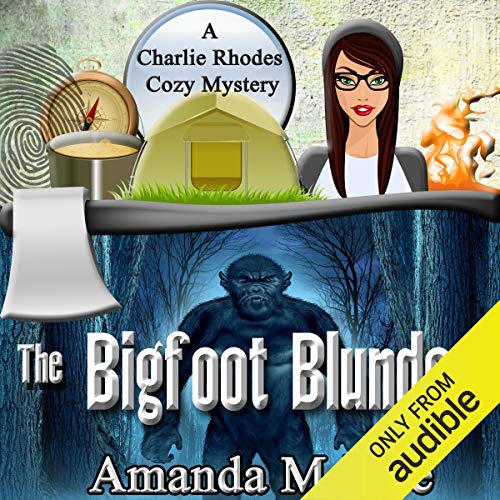 The truth is out there...maybe.

Charlie Rhodes has a lot going on. The recent college graduate just landed her dream job. That's right. She's a bona fide monster hunter. No, you read that right. Charlie has joined the Legacy Foundation, and her actual job is to find something new, wonderful and scientifically unique.

Her first job as the junior member of the team involves a biggie. It seems Bigfoot - no, the one and only Sasquatch extraordinaire itself - may have killed a woman in Hemlock Cove, Michigan. Within hours of landing at her new job Charlie finds herself traveling to an odd little town in the middle of nowhere to discover if Bigfoot is real.

Charlie hits the ground running, excitement practically overwhelming her. The dead woman worked at a local resort and was very popular with her male colleagues. That means there are plenty of human suspects, but Charlie and her team are determined to prove the culprit was animal, not human.

Hemlock Cove boasts numerous mysteries, of course, and when the team checks in to a local inn called The Overlook they find a gaggle of wacky women to contend with. On top of the potential Bigfoot issue, Charlie is convinced there's something going on with the Winchester women and she's determined to get to the bottom of the secrets she's convinced they're keeping.

That's on top of the fact that Charlie is keeping her own secret. She's psychic and telekinetic - and exactly the sort of person the Legacy Foundation would like to find. That means she's hiding in plain sight, and she's desperate to make sure nobody figures that out.

Charlie is in for a wild ride, one that includes a magical adventure and concludes with a potentially deadly face-off. Will she survive long enough to catch a second case, or will she fall victim to a killer that could come in almost any form?

What listeners say about The Bigfoot Blunder

I'm giving up on it &amp; I rarely quit a story.

Less time spent on the Winchester family and their "SNARKY" behavior. The endless bickering & snarking (the author over-uses this word), begins to bore this reader quickly. More about Charlie & her gifts would give the story traction. At some point I began to wonder who the story was about, the Winchesters? Charlie? Jack? The murder? Is there a central plot at all?

Has The Bigfoot Blunder turned you off from other books in this genre?

Less whining on the part of the narrator. As each character speaks there is an air of ambivalence & apathy to the character tone. So much defensiveness in the attitude of the characters speaks to wild insecurity & an inability to make a connection to the story.

Only that I commend anyone to make the effort to write a story & get it published. I recognize this is the author's baby. They've taken the time to produce a story meant to be enjoyed & shared. For me, the story was tedious. In spite of that, props to the author for the work.

Very disappointed. Story dragged, very little paranormal or witchy happenings. A lot of the book was whiney... characters childish. I normally love her books, this one fell flat. Won't be buying anymore of her books for a while.

I almost stopped listening after the first chapter when the main character complained about someone staring at her breasts, and not even a full chapter later started staring at someone's backside with no reference to the double standard.
Then I gave the book another try months later, and my head swam trying to keep everybody straight. The main character, the five or so members of her team of paranormal investigators, the three sisters who ran the inn, their aunt, the three cousins- each with their own boyfriend. AND THEN WE MET ACTUAl SUSPECTS

Wish I could get my money back.worst book EVER!
To many characters and no real story telling.

I Could not get past the fifth chapter. Yak yak yak
This thing is a Real sleeper. Buy it at your own peril.
Is good for a sleepless night however

The narrator's voice was so bad, Story line???

The voice fo the Narrator was monotone. That plus the story line which never pulled together after 2 .5 hours of listening, I gave up.

Narrator was mostly one tone, and did not differentate the character enough. This detracted from the story. In fact I did not finish the book because of the narrator.

Not good- at all.

I thought this book would be a fun light hearted mystery with a little supernatural element but I’m not sure what I just listened to. It was 80% inane rambling conversation between 20 somethings about obsessive boyfriends. There was minimal paranormal content, too many undeveloped characters and the ‘mystery’ it was built around was obvious. At one point I thought I thought I stumbled into a tweens book, but then there would be random sexual references that were out of character with the rest of the writing. Also there was a lot of what I assume was supposed to be witty banter, but was so sophomoric it was tiring and tedious.
The narrator was ok.

The author gives us no reason to be invested in these characters but expects us to care about their endlessly drawn out adolescent chatter. More story, please!

Not as Good as Expected

I thought the point of Charlie's visions was to help the case. Instead of portraying a giftful psychic, it portrayed a dumb woman. Langdon was too mean and overly protective. I thought that the group will have some success maybe not in finding big foot but maybe something else. I hope that Charlie show off more of her powers or gift in the next book and that she is portrayed smarter and helpful to the team and other ones around her. Need more funny quotes.