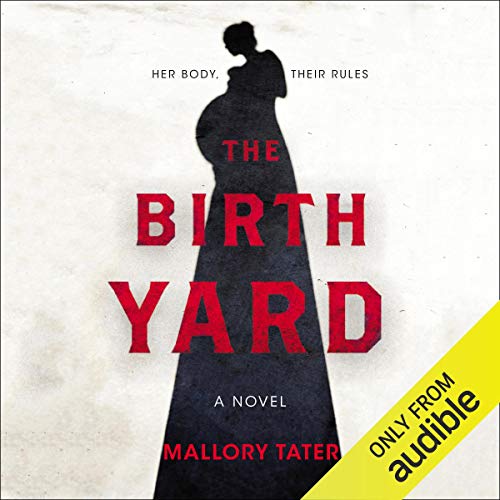 Written by: Mallory Tater
Narrated by: Elizabeth Evans
Try for $0.00

A debut novel for readers and listeners of The Handmaid's Tale and The Girls, The Birth Yard is a gripping story of a young woman's rebellion against the rules that control her body

Sable Ursu has just turned 18, which means she is ready to breed. Within the confines of her world, a patriarchal cult known as the Den, female fertility and sexuality are wholly controlled by Men. In the season they come of age, Sable and her friends Mamie and Dinah are each paired with a Match with the purpose of conceiving a child. Sable is paired with Ambrose, the son of a favoured Man in the Den. Others are not so lucky.

In their second trimester, girls are sent to the Birth Yard, where they are prepared for giving birth and motherhood, but are also regularly drugged and monitored by their midwives. Sable is unable to ignore her unease about the pills they are forced to swallow and the punishments they receive for stepping out of line. Too many of the girls, including Mamie and Dinah, have secrets and it is impossible to know whom to trust. When Sable's loyalty is questioned and her safety within the Den is threatened, she must rebel against the only life she has ever known - the only life she has been designed for.

Mallory Tater weaves an intricate narrative, equal parts suspense and action, while twisting contemporary social anxieties to dizzying extremes. She meticulously deconstructs the intricate relationships between womanhood, government, and the female body. A startling and important debut novel, The Birth Yard echoes Margaret Atwood's dark and cautionary classic The Handmaid's Tale. But this is no dystopian world; there is no totalitarian government. The Den exists now.

What listeners say about The Birth Yard

loved it and hadn't been certain I would when I read the blurb. definitely try this one.


I don’t usually read non-fiction audio books, but Mallory Tater kindly gifted me this, and I’m so grateful as I just couldn’t wait for the paper copy to be available in the UK.

This novel was nothing short of terrifying, with women being reduced to reproductive machines, and men being controlled by a small cult dictatorship.

Close to nature with vividly descriptive settings, sights and smells...this book sparks the senses and invokes fear, sadness and anger.

You can’t help but compare it to the Handmaids tale with the same clear themes running through the novel, and whilst it is not as original as Attwood’s dystopian world and therefore doesn’t quite give the same big impact, the real life and real time cult aspect does make Tater’s concept all the more frightening.

My only criticism would be that the final section felt rushed to a conclusion, and didn’t maintain the same level of tension or the dark, sinister tone Tater took the time to build in the first two parts of the novel.

A brilliant debut novel, and I am excited to see what Tater writes next!!!!

Great but needed a better ending

This was a great book, I couldn't stop listening to it. I loved the way it was written, it flowed very well and the characters were very real to me. Some of the elements seemed a bit exaggerated. Like the level of trust these characters displayed towards women they didn't even know but that can be explained as living in a sheltered community where everyone can trust everyone else. I would have liked to see beyond where it ended. I was a slight bit disappointed because I felt as though there should have been a few more chapters beyond the events in the last chapter. Even just an Epilogue or something. Overall, it was a great book and well worth the read!

I was totally drawn into the story. I felt like this could happen in the world quite easily. I binge listened to it and enjoyed it all until the end. Totally fell off at the end! What a disappointment. I would still recommend but be prepared not to like the last minute of the book.

Enjoyed the book. Narration was good. Story was good - enjoyed . Not sure what I was expecting for an ending ... was somewhat surprised by the way it ended. Worth listening to- would recommend

This had the potential to be a great story, but ended up being monotonous and dragged out. Overall, disappointing.

This story had my attention the whole time. The ending was disappointing though. I really hope there will be a sequel!

I loved listening to this book but was very disappointed in the way it ended with out telling the full story.

this book caught my eye.

and it was amazing. it lived up to my expectations of it and more. I really hope it has a second book

The story gripped me; slow at first and then before you know it, you become entangled in the characters, disliking some and hope for others.
I think a sequel would be good...