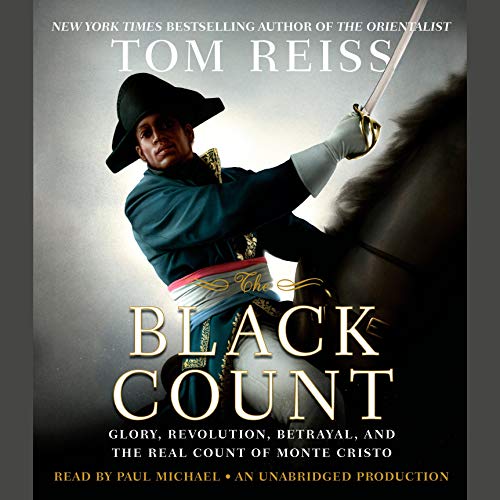 By the author of the internationally best-selling biography The Orientalist, The Black Count brings to life one of history’s great forgotten heroes: a man almost unknown today yet with a personal story that is strikingly familiar. His swashbuckling exploits appear in The Three Musketeers, and his triumphs and ultimate tragic fate inspired The Count of Monte Cristo. His name is Alex Dumas. Father of the novelist Alexandre Dumas, Alex has become, through his son's books, the model for a captivating modern protagonist: The wronged man in search of justice.

Born to a black slave mother and a fugitive white French nobleman in Saint-Domingue (present-day Haiti), Alex Dumas was briefly sold into bondage but then made his way to Paris where he was schooled as a sword-fighting member of the French aristocracy.

He was only 32 when he was given command of 53,000 men, the reward for series of triumphs that many regarded as impossible, and then topped his previous feats by leading a raid up a frozen cliff face that secured the Alps for France. It was after his subsequent heroic service as Napoleon’s cavalry commander that Dumas was captured and cast into a dungeon - and a harrowing ordeal commenced that inspired one of the world’s classic works of fiction.

The Black Count is simultaneously a riveting adventure story, a lushly textured evocation of 18th-century France, and a window into the modern world’s first multi-racial society. But it is also a heartbreaking story of the enduring bonds of love between a father and son. Drawing on hitherto unknown documents, letters, battlefield reports and Dumas' handwritten prison diary, The Black Count is a groundbreaking masterpiece of narrative nonfiction.

"From pike-wielding mobs to prisoners locked in a fortress tower, The Black Count, a fascinating, detailed account of the life of Alexandre Dumas' father, is as action packed as The Count of Monte Cristo. Unlike Dumas' famous adventure novel, however, Reiss' incredible tale is true." (Candice Millard, New York Times best-selling author of The River of Doubt and Destiny of the Republic)
" The Black Count is a dazzling achievement, a feat of ingenious scholarly research that shows a novelist's flair both for sketching character and recreating the smells and tastes, and colors and textures, of 18th century slavery and colonialism in Haiti, and aristocratic life in the metropole back in Paris. It's also the fullest biographical study of the complexity and fluidity of race relations in the colonial period that I've ever read.... I learned something new virtually on every page.... No one who reads this magnificent biography will be able to read The Count of Monte Cristo or any history of slavery in the New World in the same way again." (Henry Louis Gates Jr., Director of the W. E .B. Du Bois Institute, Harvard University)
"Tom Reiss's The Black Count is the riveting, beautifully written and well-researched story of the seemingly impossible: In 18th-century France, Alex Dumas, a man of color - the son of an enslaved woman and French nobleman - became one of his country's most celebrated generals and the father of a famed novelist who used his father's gallant and, ultimately, tragic life to create characters that are known the world over.... It could never have happened in the United States, and with great skill, Reiss shows how the moment that produced Alex Dumas was lost with the rise of 19th century racism." (Annette Gordon Reed, author of Andrew Johnson and winner of the Pulitzer Prize and National Book Award for The Hemingses of Monticello)

The story behind the greatest novelist of all time

The Black Count starts off as a marvelous, brave tale describing the way blacks were treated in France the 2 centuries before before Napoleon Bonaparte came into power, and the influence thereafter on the unlikely man who would become Alexander Dumas who would then give us the magnificent Count of Monte Cristo and it's more famous brother, The Three Musketeers.

The author masterfully gives us 2 hours of background in the centuries leading up to the birth of Dumas' father known as "The Black Count" and then the unlikely story of Dumas' rise to fame, not only because he was a genius of a writer. He was a grand character (both men, really) in this snappy rendition of the slightly mysterious Alexander Dumas... a huge celebrity during his time here who left this world at much too young of an age.

I don't like to give away everything in a review, and I'll continue that tradition here, but if you are a lover of Dumas' books as I am (TCOMC is my favorite book of all time), then you will love this well told story of how it came to be that an obese mulatto becomes one of the most cherished authors of all time and a major celebrity during his all too brief life in Paris.

This is a great book for history lovers, biography lovers and really, anyone interested in black culture or in ancient France (and how their policies toward blacks may have shaped our own 200 years ago) and just about anyone else. It is a joyous, intriguing story of how one of how this great, great author came to be and lived his life and how his father's life shaped his own. I cannot recommend this book highly enough. It's one of the best books I have listened to in so long. I am giving 5 stars for narration, but it's nothing special, except that it is expertly done. It's a straightforward read, since there are no "characters" to play. It's the story that really shines here.

By all means, treat yourself to this wonderful little known bit of history. You will be a richer person for doing it. And if you haven't read the unabridged The Count of Monte Cristo yet, you won't be able to resist after this. I'll probably have to re-listen to it now. Be sure to look for the one read by John Lee, available on Audible.com, which is so masterfully read and executed.

This is a true story of Alexander Dumas's father, a General in the French Army during the French Revolution. General Alex Dumas was born in Saint Dominique (Haiti) of a black slave woman and a white French Marquis. The book does discuss some of the history of Haiti. I recently read a book "Island Beneath The Sea" by Isabel Allende that covers the history of the island. If this story of Dumas interest you at all the Allende book will also be informative. I found the information about equality during the revolution interesting, the blacks found freedom in France while the U.S. and England still were slave traders. Dumas goes from commanding 53,000 men to secure the Alps for France to Egypt to being imprisoned in Naples. His story is the bases of all the stories written by his son. I was fascinated by tales of his imprisonment and the medical treatment he received. If you are interested in history you also will find this a must read book. Tome Reiss did a great job documenting the story and Paul Michael did a good job narrating the book.

What made the experience of listening to The Black Count the most enjoyable?

Tom Reiss writes extremely well and picks fascinating topics. This story of the son of a French marquis and a San Domaine (now Haiti) slave woman who rises to become a celebrated general in the French revolution during a brief era when all men (and women) were, in fact, considered equal. Because of highest ideals of the revolution, being half black was no longer an obstacle to accomplishing great things. Alas, the revolution was betrayed and the period was brief; racism quickly returned. It's a fascinating story of the man who would father the novelist Alexandre Dumas but who was clearly a remarkable man, a celebrity in his own right and a fascinating figure in French history.

First 1/4 of book is confusing

Once the generations of Dumas are understood the book is quite interesting. Getting past the first quarter of the book is a challenge.

This is a fascinating story that is wonderfully told. Tom Reiss's detailed account is amazingly vivid not only of the period but he by giving the whereabouts or outcomes of many places and events today. Paul Michael gives a wonderful performance as the narrator. I cannot remember enjoying a book more!

A Necessary Companion to Dumas' Writings

Alex Dumas was a larger than life man, immortalized in Tom Reiss' brilliant book. It's not hard to see why he was both an asset and a threat to Napoleon. I am a fan of Alexandre Dumas' novels and this book gives me great insight on what drove him to write his stories, especially the Count of Monte Cristo. It's seems so hard to believe that even with the success of the son, the life of his impressive father remained in obscurity.

The lasting effect of his imprisonment is so difficult to take in. He was a vital, imposing man wasted down to a shell due to horrific treatment, all of his heroic actions on the battlefield forgotten and his family forced into poverty.

A Man Who Greatness Caught Up With His Blackness

This story was narrated well with a relaxed story telling kind of feel which made it very enjoyable. In some places I thought less condense descriptions could have painted some scenes more vividly. However, overall it was an excellent story. This is the sort of story I seek out whenever possible. Alexander Dumas was a man born into a world that saw his blackness as the ultimate stain. Although born a slave and black he enjoyed unusual privilege by being the son of a white aristocrat.

Dumas developed in an uncertain period of liberty and terror simultaneously that allowed him to enjoy an incredible level of liberty seen by few black people of the time. Dumas used this opportunity to prove that men are measured by their character and not their color and excelled.

Unfortunately with the rise of Napoleon the French gave up on the liberty an equality they revolted for and consequently as a black man Dumas felt the heavy hand of white supremacy once again. Dumas' life is extraordinary and tragic all at the same time, Dumas' life represents a legacy people of African descent continue to struggle with today.

This was a great book, and I am sure I would have enjoyed it even if I didn't use the audio version. I love non-fiction, and I am a fan of Alexandre Dumas and "The Count of Monte Cristo", so all of this background information and history was fascinating. The beginning is a bit awkward, when the author sets the stage for how he came upon the material he used to write the book, and I almost gave up, but I am so glad I didn't!

The Count ,Human Rights and Tolerance

Tom Reiss clearly reveals the road to human rights and tolerance through a study of the Count's life in France, which was the seat of new thinking about tolerance for all. He shows the narrow windows that opened to the count and the effects of predjudice on those born of a different culture than the majority. Napoleon's secretive activities to maintain power and its affects on human history show that those who seek power, or fame, who disregard their affect on others, have a certain cruelty that unfairly punishes the unknowing, innocent, and sincere. I loved the book. Sparks some pretty deep thinking.

This is simply an absolutely incredible story. Thank you for bringing thîs fascinating story of the achievements to life.

great book with many historical details.