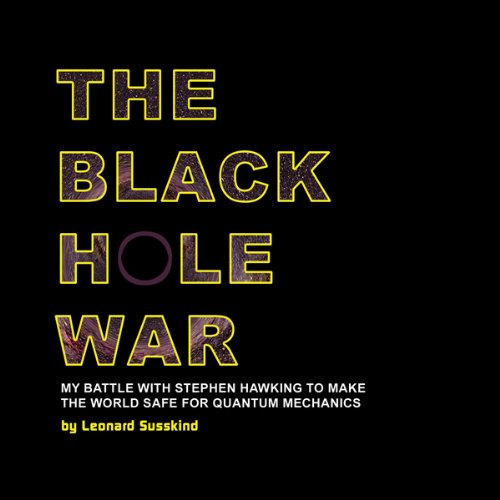 Written by: Leonard Susskind
Narrated by: Ray Porter
Try for $0.00

What happens when something is sucked into a black hole? Does it disappear? Three decades ago, a young physicist named Stephen Hawking claimed that it did - and in doing so, put at risk everything we know about the fundamental laws of the universe. Leonard Susskind and Gerard 't Hooft realized the threat and responded with a counterattack that changed the course of physics.

The Black Hole War is the thrilling story of their united effort to reconcile Hawking's theories of black holes with their own sense of reality, an effort that would eventually result in Hawking admitting he was wrong and Susskind and 't Hooft realizing that our world is a hologram projected from the outer boundaries of space.

A brilliant book about the deepest mysteries of modern physics, The Black Hole War is mind-bending and exhilarating listening.

What listeners say about The Black Hole War

Is the book what it promises to be? Yes and no. Susskind succeeds in giving us the blow for blow conflict between his theory and that of Stephen Hawking. His writing is clear and personal, and he simplifies the explanations of physics concepts as well as I could have hoped. My big disappointment, comes about an hour into the book. He goes from describing science to suddenly going into Mormon history and religion in general. First off, he needs to do a little more research into Mormonism. In fact, I think he owes Mormons an apology for how he describes the founders of their religion. He got it dead wrong. I know. I am a Mormon and have studied Mormonism far beyond what he claims to have studied. But beyond insinuating that Mormons are deluded fools, he goes further to deride all people who believe in a Creator, informing us that God was killed by Darwinism. Thanks for the religion lesson. Stick to science.

This is a strange book that, it seems to me, reeks of envy of Hawking and has an astounding lack of perspective. The author goes on for quite a while discussing the mathematics and physical features of black holes in anti-de Sitter space. He does throw in a line at the end about it all having nothing to do with OUR universe...but why then go on and on in a book for a non-scientific audience? This war was not very thrilling (and not much of a war). The author was indeed completely correct about conservation of information in black holes, the rest of the book is filler, two words would have sufficed "I Win!"

I found this audiobook to be very entertaining, packed with so much information that I'll have to listen to it several times. The narrator was so well prepared that he sounded like he might have been the author. If you love science, you've got to love this book, because Susskind interweaves the work of scientists old and new. If you're religious, you might feel offended by Susskind's up-front atheism, but I found it refreshing.

Good, but has its flaws

If this is your first layman's physics book you may want to try something else, but those who read about physics often will probably enjoy it. The book contains a lot of fascinating discussions and explanations making the physics of black holes, the holographic principle, and some aspects of string theory a little more graspable. The story is initially engaging but I lost interest toward the end as it delved deeper into string theory. My biggest complaint would be the tone of the book; It can be at times over-dramatic about the "war" and Hawking and physics in general.

What made the experience of listening to The Black Hole War the most enjoyable?

Loved it! This was a wonderful audiobook. Only part I didn't really like was that the formulas were read out loud slowly... it was just akward. This is where it would be cool to have sync-with-images audiobook so you could see the formulas on your ipod as you listened.

If you are serious about trying to understand some of the most complex and amazing concepts of quantum physics without having to learn all that pesky math the book is for you. I look forward to re-reading it.

An excellent book. The authors knowledge appears to be unquestionable. As an "amateur", I was sometimes confused on some subjects but overall understood most of the explanations. The audio book would be more pleasant to listen to if the tracks were started at the end of a word instead of in the middle of them.


That said, I have some specific problems with this book.

First, at times the author wanted to make sure that he spoke to an audience that is not at all familiar with science, but at times he assumed the reader knew things that they very likely were completely unfamiliar. E.g., he took the time to explain scientific notation, even if he later failed to consistently use it. Sometimes he was folksy, saying things like "this ain't that." At other times, however, he would reference neutrinos, quarks, etc. . . . with no mention of what those were or how they related (or did not relate) to the subject matter.

Second, I found the author's tone to be rather self-indulgent. I guess I should have been tipped off by the title - the author's motivation for writing the book was that he thinks he is smarter than Stephen Hawking. And I was troubled that, after a long discussion of quantum mechanics, he suggested that his reader was not going to understand it anyway. (Then why bother to have attempted it, or not to have tried harder to make it clear?) Sadly, the writing is such that even a usually great narrator like Ray Porter read the book with a condescending air.

Third, I find that some anecdotes about scientists and their lives are wonderful,. For example, Bill Bryson's "A Short History of Nearly Everything" was wondeful in explaining the science and describing the scientists behind the science. However, the author's little stories about one-upping Richard Feynman at a deli, missing part of a lecture because he got caught up in listening to students talking in the cafeteria (after running 15 miles, wanting chicken soup that was hot but not very good, etc.) were tiresome.

This is a great book to hear. Susskind is a good story teller while delivering a complex subject in wonderful metaphors.

Excellent book, less talking down to though please

I thoroughly enjoyed this book and plan to read many more books on the same topic. The only negative thing I can say about it is that it seems that he talks down to the reader a lot in this book.