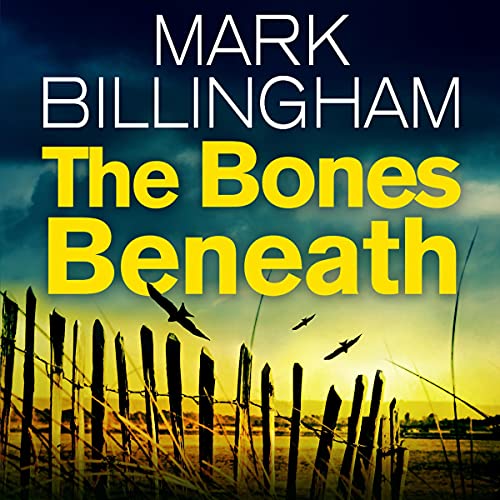 The Deal: Tom Thorne is back in charge - but there's a terrifying price to pay. Stuart Nicklin, the most dangerous psychopath he has ever put behind bars, promises to reveal the whereabouts of a body he buried 25 years before. But only if Thorne agrees to escort him.

The Danger: Unable to refuse, Thorne gathers a team and travels to a remote Welsh island, at the mercy of the weather and cut off from the mainland. Thorne is determined to get the job done and return home before Nicklin can outwit them.

The Deaths: But Nicklin knows this island well and has had time to plan ahead. Soon, new bodies are added to the old, and Thorne finds himself facing the toughest decision he has ever had to make....

Tom Thorne returns in this utterly gripping, brilliantly plotted thriller. The Bones Beneath is Mark Billingham's most ambitious and accomplished work to date.

What listeners say about The Bones Beneath

Yes, because I know all his other books and this comes nowhere near his usual standard.

What could Mark Billingham have done to make this a more enjoyable book for you?

He could have written a story which held a reader's interest and did not make him regret having chosen this book. Tom Thorne has been transformed into a vapid character with none of his usual energy, daring, humour and psychological depth. He is a cardboard, one-dimensional ordinary man - not even a detective. The interaction with his colleagues does nothing to bring either him or them to life. There is a flatness about the whole book. The ending which should be exciting does nothing to rouse interest.

He did not use his voice to inject interest or lift a reader's attention in the story but spoke quickly in a voice which could on occasions almost become a monotone.

For me, it is forgettable.

Mark Billingham always delivers high quality, enjoyable fiction but he is not a good narrator.
This could have been an outstanding listen but was severely diminished by drab lack lustre narration by the author.
Excellent plot and though still enjoyable the monotonous drone of the reader really spoilt this for me. Next time use someone good like Paul Thornley.