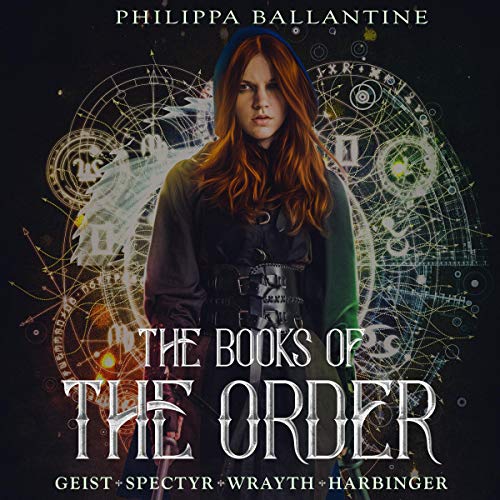 The Books of the Order Collection

The undead are here and only the Deacons stand in their way. The Order of the Deacons, stand as protectors of the Empire, guardians against ghost possession, sentinels warding off the malevolent haunting of the geists.

Sorcha Faris, the most powerful deacon of the Order, finds herself thrust into an unwanted partnership with a total novice, Merrick Chambers. That’s bad enough, but when they are dispatched to an isolated village to counter a surge of violent geist activity, they find their fate bound with Raed Rossin. Shapeshifter and pretender to the Imperial throne he bears a terrible curse which endangers them all.

As they investigate, the strange settlement is reveled to be haunted by a undead creature more predatory and horrifying than any encountered before. Together they quest to uncover the mystery of twisted rituals passed down through the dark reaches of history intent on striking at the heart of the Empire.

She might be most powerful Deacon, but Sorcha Faris has a tarnished reputation to overcome.

Frustratingly, her superiors have her and her partner, Merrick Chambers, chasing down rumors of geists rather than the real thing. So they jump at the chance to escort a delegation going south for negotiations.

Their destination, the distant city of Orinthal, is plagued by a string of murders, but when Sorcha and Merrick investigate the mystery they find a hungry and cunning geist at the end of it. Disguised as a vengeful goddess wrapped in magic, she is bent on destroying her enemies, including the Rossin hidden inside Sorcha’s lover.

Trying not to cause a dangerous political incident, while struggling against the sorcery of the geist, the Deacons delve into the past to find the answers.

Although she is one of the most powerful Deacons in the Order, Sorcha Faris is still unable to move or speak after her last battle. Even her partner, Merrick Chambers, cannot reach her through their shared Bond. Yet there are those who still fear Sorcha and the mystery of her hidden past.

Meanwhile, Merrick has been asked to investigate a new member of the Emperor’s Court. But when Sorcha is abducted by men seeking Raed Rossin, the shapeshifting rival to the throne, Merrick must choose where his loyalties lie.

After the Razing of the Order, Sorcha Faris, one of the most powerful Deacons, is struggling to regain control of the runes she once wielded. The Deacons are needed more desperately than ever. The barrier between the world of the living and the world of the dead is weakening, and the Emperor has abandoned his throne, seeking to destroy those he feels have betrayed him.

Though she is haunted by the terrible truth of her past, Sorcha must lead the charge against the gathering hordes of geists seeking to cross into the Empire. But to do so, she will need to manipulate powers beyond her understanding - powers that may prove to be her undoing...

What listeners say about The Books of the Order Collection

Awesome! Didnt want it to end!

Loved this set. Great story & great narration by the author. Immediately looked for more from her once this set was done!

A superb story by a superb maker of worlds

Philippa Ballantine is always a joy to listen to, and especially with this tetralogy, which showcases her knack for complex world-building and intricate plotting. Highly recommended.

I have been reading and listening to Pip since her early podiobook days. the books of the order are a fascinating mix of magic, romance, devastating danger, peaks of joy, and hope poop

this was a fun quick paced story

the books are all well written. the narration is easy to understand and really brings the characters to life.