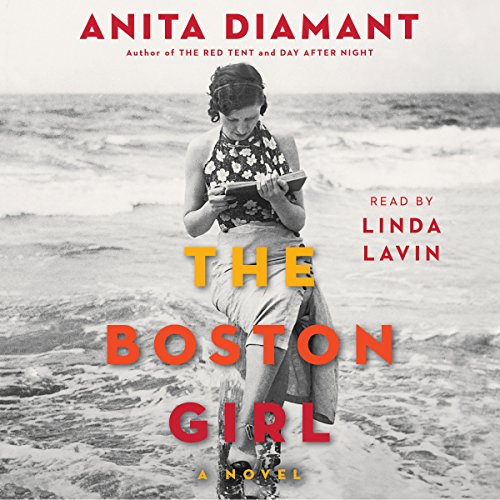 The Boston Girl: A Novel

Written by: Anita Diamant
Narrated by: Linda Lavin
Try for $0.00

From the New York Times best-selling author of The Red Tent and Day After Night, comes an unforgettable coming-of-age novel about family ties and values, friendship and feminism told through the eyes of young Jewish woman growing up in Boston in the early 20th century.

Addie Baum is "The Boston Girl", born in 1900 to immigrant parents who were unprepared for and suspicious of America and its effect on their three daughters. Growing up in the North End, then a teeming multicultural neighborhood, Addie's intelligence and curiosity take her to a world her parents can’t imagine - a world of short skirts, movies, celebrity culture, and new opportunities for women. Addie wants to finish high school and dreams of going to college. She wants a career and to find true love.

Eighty-five-year-old Addie tells the story of her life to her 22-year-old granddaughter, who has asked her "How did you get to be the woman you are today?" She begins in 1915, the year she found her voice and made friends who would help shape the course of her life. From the one-room tenement apartment she shared with her parents and two sisters, to the library group for girls she joins at a neighborhood settlement house, to her first, disastrous love affair, Addie recalls her adventures with compassion for the naïve girl she was and a wicked sense of humor.

Written with the same attention to historical detail and emotional resonance that made Anita Diamant’s previous novels best sellers, The Boston Girl is a moving portrait of one woman's complicated life in 20th-century America, and a fascinating look at a generation of women finding their places in a changing world.

What listeners say about The Boston Girl: A Novel

Loved this book so much that this is second time. First time in hospital and I found for some reason that it was comical. It made me feel better. This time I loved it even more, a story of a life.

I loved the way this story was narrated. It was so conversational and easy to connect with the main character.

The Boston Girl is an interesting story of a Jewish girl, her two sisters and the girls who became her lifelong friends. Woven within the stories, are sad losses and how they affected the family for the rest of their lives, normal everyday activities of a Jewish family, and the joyous moments we can all relate to (finding and keeping love). Also, it paints a picture of the effects of the ravages of war and the depression. It made you think.
Thank you Anita Diamant for writing this story and Linda Lavin for narrating it. Thank you Audible for providing and supporting your app which makes it possible for anyone to hear a story (especially the visually impaired)!

I thoroughly enjoyed every minute of "The Boston Girl". It's not a thriller, or a mystery, or anything that will turn your world inside out. It is simply a quiet, lovely story of a life well lived. Anita Diamont's superb writing is perfectly paired with Linda Lavin's engaging performance. You will laugh and cry and cheer and no doubt see a piece of yourself in at least one of the characters that inhabit this book.

The narration was just right and made me feel as if I were sitting with my favorite aunt...listening to her life story. Cultural and generational insights galore. Well done!

I. Loved. This. Book.
What a delightful character. The intonation of the reader was authentic. The story-inspirational.

One of her best

This was a great book to listen to because it was as if you are listening to the tapes of the grandmother being interviewed. I have read all of Anita Diamants books and this is one of her best.

Understanding how was Boston

I lived in Boston for 2 years, and this book helps me to understand the city in a different way. The history of someone that grew up there, and how the world is changing, especially for women.
I enjoy the performance, but I would have like a stronger Bostonian accent.

I thought the narrator, Linda Lavin, did an excellent job. Her voice was very fitting.

It was a fascinating look through the life of an eighty-five year old Jewish grandmother describing her history, her world to her granddaughter. I could relate on many levels. This is a lovely, sentimental tale if not a little dull at times. It's not an exciting read/listen but it is interesting. I learned a lot and wished that my grandmother had sat down and told me everything about her life before she died. Perhaps I'll get this chance with my own granddaughter someday.

I’ve listened to it multiple times. It’s like having a conversation with an old friend.

Linda Lavin is the best.

If you could take any character from The Boston Girl: A Novel out to dinner, who would it be and why?

A story that brings up no emotions

It was pleasant enough to listen to but if I skipped it it would not be missed. Nothing interesting or funny or heart wrenching. Blah.