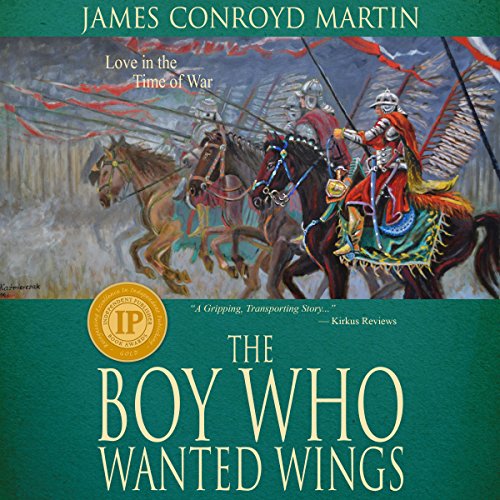 The Boy Who Wanted Wings

It is September 11, 1683, and the Ottoman Turks stand at Vienna poised to bring down the weakening citadel and impose jihad. Their sights are set on all of Europe.

Aleksy, a Tatar raised by a Polish peasant family, holds in his heart the wish to become a Polish winged hussar, a Christian lancer who carries into battle a device attached to his back that holds dozens of eagle feathers. As a Tatar and as a peasant, this is an unlikely quest.

When he meets Krystyna, the daughter of the noble who owns the land that his parents work, he falls hopelessly in love. But even though she returns his love, race and class differences make this quest as impossible as that of becoming a hussar. Under the most harrowing and unlikely circumstances, one day Aleksy must choose between his dreams.

What listeners say about The Boy Who Wanted Wings

Very good listen. A simple love story set in Poland during the war with the Ottoman Turks. James Conroyd Martin delivers up another charming book.

A magnificent combination of a 17th century century love story juxtaposed with the background of medieval war. This is one you won’t want to put down, nor will you want it to end. Having finished it two days ago, I still think about and miss the characters!

This book covers a topic area that certainly deserves a youth novel. For that I commend it. However, there are some major issues. Continuity between the author’s historical accuracy in setting, customs, and personages is often jolting by comparison to his insertion of modern sensibilities merely excused by the youthfulness and brashness of the two main characters. The ending had a variable build up that promised much more than given. Too many open suspenses; conflicts, promises, and dreams. The narrator also provided some issues too. Often shifts in excited reading, perhaps to create the setting of fighting and drama simply made it feel cheap like an old radio show which in its own right fits well with such drama. In this reading however it only provided yet another misfit to the setting and style of the novel.