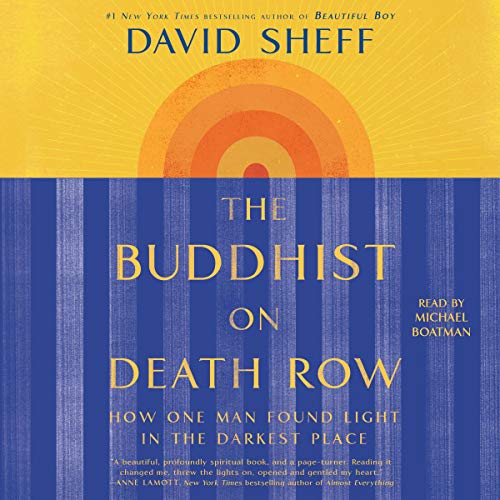 How One Man Found Light in the Darkest Place
Written by: David Sheff
Narrated by: Michael Boatman
Length: 7 hrs and 32 mins
Categories: Politics & Social Sciences, Philosophy
5.0 out of 5 stars 5.0 (2 ratings)

The number one New York Times best-selling author of Beautiful Boy explores the transformation of Jarvis Jay Masters, who became one of America’s most respected Buddhist practitioners during his two decades in solitary confinement in San Quentin.

Jarvis Jay Masters’ early life was a horror story whose outline we know too well. Born in Long Beach, California, his house was filled with crack, alcohol, physical abuse, and men who paid his mother for sex. He and his siblings were split up and sent to foster care when he was six, causing him to progress quickly to juvenile detention, car theft, armed robbery, and ultimately San Quentin. While in prison, he was set up for the murder of a prison guard, a crime that landed him on death row, where he’s been since 1986.

At the time of his murder trial, he was also in solitary confinement and spent 22 years in a five-foot-by-11-foot cell. This is where The Buddhist on Death Row takes off. With uncanny clarity, David Sheff describes Masters’ path to enlightenment - from being sullen and violent to discovering how easy and how hard it is to just sit and breathe, how those minutes spawn heightened perception and deepened compassion, the right way to remember one’s pain, and much more. Sheff does a brilliant job of portraying Masters’ gradual but profound transformation from a man who was once dedicated to hurting others to instead stopping brawls in the prison yard, talking prisoners out of suicide, and counseling high school kids by mail.

Along the way, Masters becomes drawn to the principles that Buddhism espouses - compassion, sacrifice, and living in the moment - and he gains the attention of prominent Buddhist practitioners, including Pema Chodron, the most popular Buddhist cleric after the Dalai Lama. And while he is still in San Quentin and still on death row, he is a renowned Buddhist thinker who shows us how to ease our everyday suffering, relish the light that surrounds us, and endure the tragedies that befall us all.

What listeners say about The Buddhist on Death Row

Wonderful journey we all experience. A must read for all humans interested in freedom in all.

The story made me laugh and cry, feel joy and sorrow. what a beautiful experience!

Wow, what a read. I’ve been an audible member for about 6 months and have listened to 10-15 books in that time, yet this is my very first review. I know David Sheff only from his book Beautiful Boy (which I loved) and was alerted when The Buddhist on Death Row came out. After seeing what the book was about I decided to buy it and listened the next day. I am so thankful that I was nudged to get this book, it was very eye opening in many ways. I loved the way we got to see into the life of Jarvis and the progress he has made within the prison. I am not someone of religion, but learning this story has got me curious on Buddhism as well as more work of David Sheff. David spent 10+ years communicating with Jarvis and did a beautiful job documenting his life, his challenges, and his impact. I was also a fan of the narrator, Michael Boatman, he was very charismatic when needed and gave the characters and story life. Well worth the listen, whether you’re into true crime/the justice system, religion, or a good story.