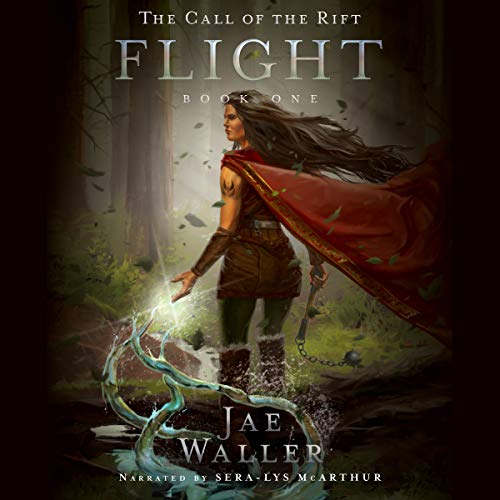 The Call of the Rift: Flight

Written by: Jae Waller
Narrated by: Sera-Lys McArthur
Try for $0.00

Seventeen-year-old Kateiko doesn’t want to be Rin anymore - not if it means sacrificing lives to protect the dead. Her only way out is to join another tribe, a one-way trek through the coastal rainforest. Killing a colonial soldier in the woods isn’t part of the plan. Neither is spending the winter with Tiernan, an immigrant who keeps a sword with his carpentry tools. His log cabin leaks and his stories about other worlds raise more questions than they answer.

Then the air spirit Suriel, long thought dormant, resurrects a war. For Kateiko, protecting other tribes in her confederacy is atonement. For Tiernan, war is a return to the military life he’s desperate to forget.

Leaving Tiernan means losing the one man Kateiko trusts. Staying with him means abandoning colonists to a death sentence. In a region tainted by prejudice and on the brink of civil war, she has to decide what’s worth dying - or killing - for.

“Waller's world-building is impressive.... While the magical and romantic elements of Waller's story are most likely to hook teen readers, it's the commentary on colonized cultures that really sets this novel apart from other YA fantasy tales.” (Quill & Quire)

What listeners say about The Call of the Rift: Flight

The world building in this book is good and detailed.
The story is interesting.
My issue is with the main character. She’s a whiny little .... To some extent, that’s fine, she’s 18, and raised in a remote area with no education beyond really idiotic wrote memorization of mystical crap, so it’s not a surprise that she doesn’t have much of a clue. But she never gets a clue, doesn’t learn. And one minute she’s worried about the entire world, the next a specific individual and to hell with everyone else...oh, and everything, absolutely everything, no matter what (so long as it’s bad) is her fault and responsibiiity. That crap gets old.

It's difficult to describe what lore this could best be described as. Druidic? Native American? The different tribes from Avatar?

Kako, our protagonist, is able to commune with spirits and find water and bend it to her will, though this isn't the most interesting thing about her. This could be considered a coming of age tale, but only in the most technical terms. Most of the time, coming of age tales don't depict brutal violence and the consequences it brings.

But what this tale does depict, are a range of topics that tend to focus me into a story, and I am probably not alone. Things like the grim inevitability of arranged marriages. Leaving home with no certainty you will reach anywhere that is safe. The horrors of violence. What it means to live in a world that is changing around you. This is a story that could have very easily taken another direction and not looked so hard at its world and its characters. Kako sets off away from her people. Some things will happen. In the strictest YA sense, the book didn't need to spend the time where it did. Instead, Waller allows us to see what it means to be injured. What it means to accept local customs. What it means to have consequences for your actions. For that alone, it will keep you hooked. You won't just want to see what the characters will do next, but how an indifferent universe will balance their actions.