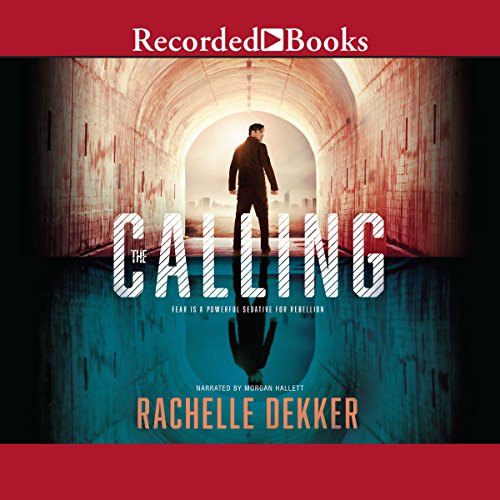 Written by: Rachelle Dekker
Narrated by: Morgan Hallett
Try for $0.00

Remko Brant had never been so sure of anything as escaping the Authority City with Carrington Hale. But bravado comes easy when you have nothing to lose. Now a husband, a father, and the tactical leader of the Seers, Remko has never had so much at risk. As he and his team execute increasingly dangerous rescue missions inside the city, they face growing peril from a new enemy.

Recently appointed authority president Damien Gold claims to be guiding a city shaken by rebellion into a peaceful, harmonious future. But appearances can be deceiving. In order to achieve his dangerous ambitions, Gold knows he must do more than catch the rebels - he must destroy the hope their message represents...from the inside out.

With dissension in his own camp - and the CityWatch soldiers closing in - Remko feels control slipping through his fingers. To protect those he loves, he must conquer his fears and defeat Gold...before one of them becomes his undoing.

What listeners say about The Calling

The sequel to The Choosing was as good as the first. Which also means that I also wish that the message, the metaphor of Aaron representing Jesus was a little different. Faith is more than just accepting that you are a child of God and loved no matter what. While this is true, there is more to it. It requires a death, the death of your old self, and repentance, repentance from your sinful nature. You need to get on your knees and beg for forgiveness and accept the gift of Salvation Jesus offers. Then, He will fill you with all the light and love He has to offer. There is no message or repentance in these books. And I wish there was.

Who the heck is Aaron?

Great idea for a book! The 2nd book dragged on for me.

Don't like the uncertainty of Aaron's identity. Who the heck is Aaron? How can he just be in dreams and in places that are heavily secure and not be detected? Is he an angel? And if so why don’t we know? If he is NOT an angel is he Jesus? He can’t be Jesus Christ my Lord because he claims he can NOT SAVE anyone. I was really confused.

And, in the story, he's supposed to be speaking Truth. But he always spoke in riddles. Jesus didn’t always talk in riddles. Sometimes, Jesus would say, “Go and sin no more” Sometimes Jesus would kill a tree just to get a point across.

It was even more confusing how the community would mention god. Aaron never said 'God', but he did talk about the Father. This could be very confusing for a new Christian.

Aaron often spoke of things like finding your true worth, overcoming insecurity. Which is a beautiful message but what the heck is he talking about when he would mention “the power within oneself” If Aaron is refereeing to the Holy Spirit inside of us then it was not clear. AGAIN if I was a baby Christian I would have MORE questions than answers. It felt like Aaron was some kind of worldly hippy trying to be profound.

Too similar to the Choosing. Ok but did not hold my attention. Did not finish the book. Will not buy another😕. Disappointed.

This book is so lovely and it's helped me to remember my identity and what my Father thinks of me. It helped me to let go and surrender my fear.

Much has changed for Carrington and Remko. They have a daughter, they have a purpose, and they have an enemy who seems to blot out that purpose from their memories. They must choose to remain called to that purpose or choose a calling of their own making, which makes this a beautiful 2nd installment in the series.

Excellent story-telling and character development. Can't wait to read the next one in the series!

good reading of a good book.

Good story with drama, action. and a spiritual backbone. leaves you teddy to start the next.

I loved this book! definitely reading it again and again. storyline was intriguing & many surprises

I love this book, but it can definitely get depressing at times. Nothing like lows to make the highs feel more powerful though. The only problem I had with the performance was that she sang a hymn in the book to a tune completely different than the actual song. It was slightly painful. Other than that, she was great!