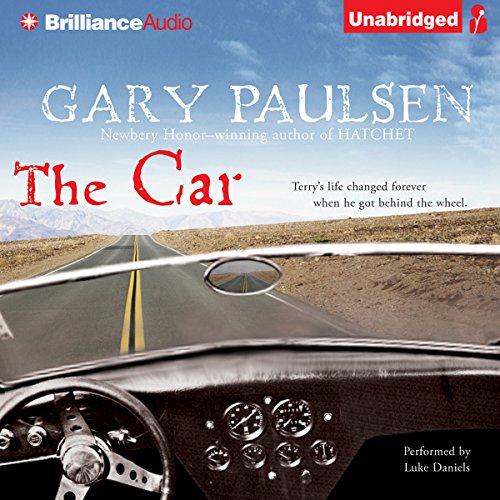 Written by: Gary Paulsen
Narrated by: Luke Daniels
Try for $0.00

Fourteen-year-old Terry has parents who never paid him much attention. So when they both disappear after one of their all-too-frequent arguments, Terry isn’t exactly eager for them to come home. On his own, he occupies himself by assembling a car kit that’s been collecting dust in the garage for years. When the car is finished, Terry is pleased to discover it actually runs. Though he doesn’t know much about driving, he gets behind the wheel and heads west, with the notion of visiting an uncle in Oregon.

But Terry’s plan takes a detour when he meets Shakespeare-quoting wanderer Waylon Jackson. The aging Vietnam vet has seen and done extraordinary things, and he is still hungry to learn more. With Waylon as his copilot, Terry ends up in locales as varied as a religious commune, a poker game in Deadwood, and Custer’s Last Stand. It’s an exciting and sometimes dangerous journey. Along the way, he learns a lot about people, about America - and ultimately, about himself.

“Besides evoking a type of independence and tough-mindedness that will appeal to teens, this provocative novel introduces and explores some interesting philosophies of life while stressing the value of learning from experience.” ( Publishers Weekly)

What listeners say about The Car

Chapters don't go in order on the audio.

The chapters are out of order. I ordered it to use with students with special needs. It was very confusing for them.

Insperation from a short story.

this one made me smile the whole way through. and who hasn't dreamed of doing what he did. it got me back to finishing my project. and reminded me to always learn it makes things more interesting. Gary, Luke good job. I hope to hear from yall again.

A good story line. Paulsen develops the characters well enough, but the ending sucks. What happened...

Gary paulsen's narrative writing form is second to none. he is an expert writer he tells the story through The eyes of a fourteen-year-old boy coming of age. it's an excellent read for traveling down the road.

wish there was a better ending. otherwise great story read it as a kid

Great book but the ending was a little lack luster. overall worth a listen. Seems as if the ending was left off in a matter where it could be a series but did not see a second book in my search.

this is my favourite

when I was younger this movie really defined what I wanted to do. Paulson always does the classics