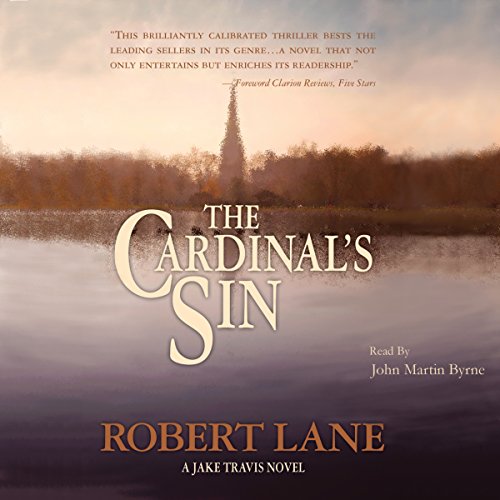 While concluding a European vacation with his girlfriend, Kathleen, Jake Travis is given an assignment: Kill an international assassin who targets the loved ones of special ops personnel. The assassin is known to dress as a cardinal and take contemplative strolls in Kensington Gardens. Jake completes his task and he and Kathleen return to Florida where she learns that he "clipped the wrong bird". Jake had murdered a popular and progressive cardinal.

Jake must now track down a woman who can lead him to the real killer before he strikes again. Kathleen recoils from their relationship upon Jake's confession of his fateful act, leaving him to agonize whether or not he's lost her for good. Meanwhile, Jake is obsessed with his struggle to answer the central question he desperately needs to resolve: Why did the cardinal use Jake to end his life?

What listeners say about The Cardinal's Sin

Not literature, but an entertaining story. Heard most of it on airplanes, and it was good enough to make my flight time pleasant. I would recommend this for vacation or beach reading.

The story is not bad, but the narrator is just awful because he seems to have the same voice for most of the male characters, as well as the female, and sometimes I think he forgets whose voice he's suppose to be using. Otherwise story is good except the ending, I wish, fervently hope that Jake Travis will tell Cynthia what the Cardinal last words were.

This is the first book by this author I read. Enjoyed the story very much. I will look for other books by the author. Would recommend it to friends as well as my book club. The story and characters are well developed and although I read many mysteries this one held my interest to the last chapter and was surprised by the ending.

The Jake Travis series are my favorites

This entire series of books are very good. I started with The Cardinal Sin and then read the first two in the series. Jake Travis leads a very interesting life and I really like his sense of humor. They can be read in any order as they are stand alones.

This book made me laugh out loud in quite a few places.

I can't wait for the next one to come out!!