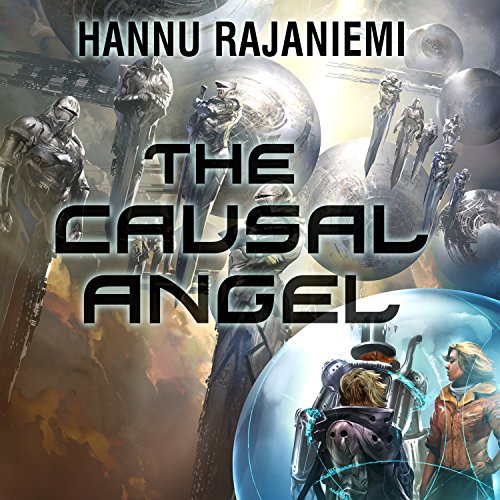 With his infectious love of storytelling in all its forms, his rich characterization, and his unrivalled grasp of cutting-edge science, Hannu Rajaniemi has swiftly set a new benchmark for science fiction in the twenty-first century. Rajaniemi's future is one in which quantum effects can be manipulated by the powerful to unknowable ends; an era in which some are gods and billions of others are enslaved for the processing power of their brains; where in the inner Solar System, the once-human Sobornost endlessly iterate themselves in vast, planet-sized guberniyas, while casually running experiments on the photosphere of the sun.

In this world, Jean le Flambeur has broken out of a virtual prison and, later, into the mind of a living god. Now his one-time rescuer, the warrior Mieli, is a prisoner herself. To get her back, Jean will need tools: A quantum pyramid scheme, a pair of physical bodies, a nugget of computronium, a bunch of entangled EPR pairs, and a few very special hydrogen bombs. Jean le Flambeur, gentleman adventurer, is back. The solar system will tremble from one end to the other before he's done.

A wonderful, fitting end to the trilogy that wraps up many questions left unanswered -- whether the reader noticed them earlier or not -- by the previous books. Unfortunately, the entire experience was marred by the new narrator's pronunciation of every... single... name. There is almost no noun in this performance that is not pronounced differently from the narrator of the previous books, and I found each instance incredibly grating.

Anyone who listened to first two books should avoid this book. The new narrator pronounces many many things differently. You can tell he didn't bother to listen to the first two books, at all. Also, he gives voice to characters that do not match the character. For example, he gives the YOUNG detective Isadore, the voice of a decrepit old man. Again, you can tell he had no idea what has come before.

This is always a disappointment (the new narrator in Richard Morgan's third book, Woken Furies, pronounced the name of the main character in a way the first specifically said was wrong.)

Why switch narrators on the last book in a trilogy

Would you try another book from Hannu Rajaniemi and/or Roger Wayne?

What was one of the most memorable moments of The Causal Angel?

When I realized that the narrator didn't know how to pronounce most of the names that are unique to this series.

There's no way Wayne listened to the previous books because he pronounced most stuff differently. Scheduling issues or whatever, changing narrators on the last book in a trilogy is ridiculous.

What character would you cut from The Causal Angel?

This really needs to be redone with Brick back as narrator. I mean, seriously, Wayne pronounces the names of basically all the main characters different. So disappointed by this.

The narration was absolutely horrible, couldn't make it past 22 minutes. I purchased the Kindle version and read that so Roger Wayne's horrible reading wouldn't ruin the entire trilogy for me. As Zac & Paul mentioned, Wayne clearly didn't listen to the previous books and I would guess the producer didn't bother as well. Wayne murdered every unique name/word he came across. I will admit I started the book with a slight bias (I am a fan of Scott Brick as a narrator) but I didn't expect a to hear a horrible impression of a dramatic reading.

I hope they redo the audio version with Scott Brick as the narrator, as I really enjoyed the story (in fact, I didn't want it to end).

Oh Audible, why did you switch narrators?!

I absolutely love this book series. I'm a huge fan of physics, and any sci-fi that follows the vein of quantum tomfoolery is high on my reading list. This is not a review of the book, the author, or the series. This rating is solely based on the terrible narration by Roger Wayne. Those that didn't listen to the first two books might find joy in this one, but I warn you: If you listened to Scott Brick's excellent renditions of the first two novels you will not enjoy this audiobook.

What other book might you compare The Causal Angel to and why?

I could forgive the robotic narration (his pacing is terribly inconsistent) even if the random breaks in speech tore me out of the story. I could even forgive his initial hesitance when trying to pronounce the author's name. However, I cannot forgive the mispronunciation of main character names. The voices do not fit the characters. There's no subtlety to the performance. I'll admit, I only made a little ways into the story. That's how hard it was to even give this new narrator a chance. At first, I told myself, he wasn't that bad. Then he chewed through several big names in the series and I couldn't handle it anymore.

Please bring back Scott Brick and have him narrate the last book in the series. His narration of The Quantum Thief and Fractal Prince are what made me love Audiobooks. I'd really like to finish this series with him at the helm.

Tried it for a couple of hours and found the reader poor. Poor pronunciation of specialized terms, robotic delivery, character voices indistinguishable. Only gets three stars due to the great story.

Who would you have cast as narrator instead of Roger Wayne?

Scott Brick was pretty good on the Quantum Thief.

It took me TWO weeks to listen to a 10 hour book! Like everyone else. I’ve been waiting for a long time for this book to come out and it was a pain to listen to the new narrator. Love the book though. The story actual closed and explained a lot of questions I had and confirmed some theories.

If you want a good smooth listen, don’t get this book. The narrator’s voice was okay to listen to but his expressions and readings were VERY robotic. It felt like I had called for some service and was listening to the automated call center machine.

Maybe the publisher’s changed narrators because Brick didn’t want to do it anymore, fine… but the new guy should have done some research and, I don’t know, listen to at least one of the previous books to get a flow of the characters and the story. Kinda get an idea of what the customers have been listening to. Then make it better. I found myself yelling at the narrator about pronunciations of names, places, and items because it felt wrong the way the narrator read.

In summary…great ending, awful narration. Just buy the hard copy and read it yourself.

Do not listen to this if you have listened to the previous installments on audible. This narrator struggles with pronouncing literally everything. The whole experience was plagued with having to figure out what Roger Wayne was trying to say, only to get lost. Which in a books series like this is unacceptable. It's as though this is a recording of Roger Wayne's first read through, and not one person in the production cared enough to hold any consistency

Never in my 5 years on audible and in the 200+ audiobooks I've listened to have I heard such a terrible mismatch.

God damn, I wish there was more sci-fi like this.

It's hard to find sci-fi that combines relentless imagination with both a serious understanding of science and a genuine sense of fun. Hannu Rajaniemi's post-singularity adventure trilogy does that admirably. This third entry focuses heavily on the Zoku- a culture with a singular interest in modern trends that stretches credibility a bit, but that's nevertheless vividly imagined and endlessly entertaining to hear about. The novel wraps up the the story of Mieli and Jean le Flambeur nicely, though in a way that might unfortunately preclude a fourth book. Hopefully, Rajaniemi will return to this setting in future books anyway.

Having read the other two novels in the series as e-books, I can't comment on how this narrator compares to the previous one, though I can say that his narration seemed perfectly fine on it's own merits. The voices never grated, the pronunciations were more or less as I'd imagined them from the ebooks, and the overall tone seemed to fit the story. If you're considering this audiobook after having read the other novels in print or e-book format, don't let the other negative reviews dissuade you.

Had to return it.

Wish I had read the reviews beforehand. I couldn't handle the new narrator and the lack of consistency in pronunciation and voices for the various characters. In the end had to return it and will look to close out the series on my kindle.

Roger Wayne is a poor substitute for Scott Brick. Like listening to an e reader.