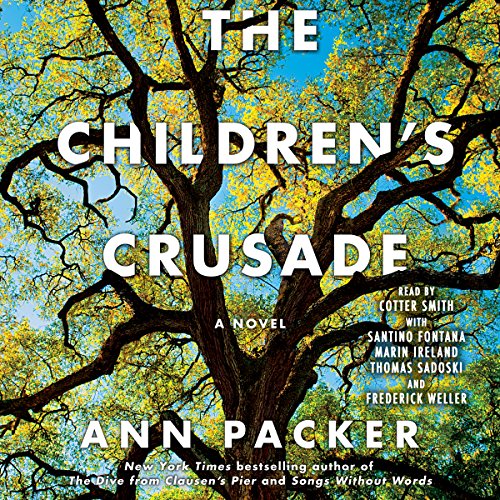 From the New York Times best-selling, award-winning author of The Dive From Clausen's Pier, a sweeping, masterful new novel that explores the secrets and desires, the remnant wounds and saving graces of one California family over the course of five decades.

Bill Blair finds the land by accident - three wooded acres in a rustic community south of San Francisco. The year is 1954, long before anyone will call this area Silicon Valley. Struck by a vision of the family he has yet to create, Bill buys the property on a whim. In Penny Greenway he finds a suitable wife, a woman whose yearning attitude toward life seems compelling and answerable, and they marry and have four children. Yet Penny is a mercurial housewife at a time when women chafed at the conventions imposed on them. She finds salvation in art, but the cost is high.

Thirty years later the three oldest Blair children, adults now and still living near the family home, are disrupted by the return of the youngest, whose sudden presence and all-too-familiar troubles force a reckoning with who they are, separately and together, and set off a struggle over the family's future. One by one the siblings take turns telling the story - Robert, a doctor like their father; Rebecca, a psychiatrist; Ryan, a schoolteacher; and James, the malcontent, the problem child, the only one who hasn't settled down - their narratives interwoven with portraits of the family at crucial points in their history.

Reviewers have praised Ann Packer's "brilliant ear for character" (The New York Times Book Review), her "naturalist's vigilance for detail, so that her characters seem observed rather than invented" (The New Yorker), and the "utterly lifelike quality of her book's everyday detail" (The New York Times). Her talents are on dazzling display in The Children's Crusade, an extraordinary study in character, a rare and wise examination of the legacy of early life on adult children attempting to create successful families and identities of their own. This is Ann Packer's most deeply affecting book yet.

"Cotter Smith et al. are expressive narrators as the novel's points of view shift from chapter to chapter. As each narrator portrays one of the Blair siblings, their individual voices blend beautifully with those of the surrounding chapters, creating a true familial effect. The strong quality in each voice not only provides aural unity but also propels the listener forward. Flawlessly paced and produced, this is an outstanding listen." (AudioFile)

What listeners say about The Children's Crusade

One of the most interesting, poignant, sad and true stories of a family in (and out) of turmoil I have read in a while. The characters are so real I felt like I was a part of their lives, I was so wrapped up in each of their stories. Slow and steady storytelling with not much action, but a lot of revelation. Loved it

This is a beautifully crafted novel with timeless content about families and human relationships. It is read with perfection. I recommend it to all who listen to straightforward readings of literary fiction. I couldn't put it down.

Great family drama. I recommend this novel to fans of Six Feet Under; great tension and nuanced characters throughout. Enjoy!

When Bill Blair buys a piece of land in 1954 in what will become Silicon Valley, complete with a towering California oak, he sets this family drama in motion. Bill, a pediatrician whose motto is “Children deserve care”, dreamed of having his own children, and soon marries Penny. They build a house (which figures largely in the novel), have “the three Rs”, Robert, Rebecca, and Ryan, but when unplanned James is born, and the family begins to fail.

“Think how much we love the three we have,' Bill said when, newly and accidentally pregnant with James, she wept and wept. 'I'll die,' she said, and he smiled an indulgent smile that chilled her."

James is a wild child, but it wasn't clear to me if this was his personality, the result of the way he is treated by the rest of the family, or a combination of factors. When Penny is overwhelmed and can't control him, she distances herself from the family, both emotionally and physically. She begins this process by doing craft projects in the house, calls herself an artist when she uses a shed down the hill from the house as her studio, and eventually moves into the shed. The title comes from the heartbreaking children's crusade to try and think of things that their absent and uncaring mother might like to do with them, to spend time with them. Their stories are told in multiple first-person perspectives from the children and the adults they become, along with third-person sections recounting this sad family history.

While I was interested in reading the thoughts from the siblings in the first person, I think the story suffered because we are not privy to any of Penny's perspectives. I don't understand how she became an artist, other than doing crafts with clothespins and calling it art. To me, she was selfish, apathetic, and later downright cruel when she exploited James through her art. Even though Penny had once created a scrapbook about her perfect family of two boys and one girl, she did not come to understand that she was not cut out for motherhood until it was too late, and she seemed to simply place her needs for artistic time and furthering her imagined artistic career above everyone else in the family, without guilt or regret.

I wish there had been more from Penny, but I also wish there had been less detail and rambling in the first half. The book became a bit of a slog for me, but I am glad I finished because the last quarter was some of the best stuff. I enjoy listening to good family sagas, but The Children's Crusade was more of a family drama. While I could appreciate parts of it, I didn't find much reading enjoyment.

I listened to this in one sitting, being the youngest of four kids...I can't even begin to say how emotional this was for me. Right now I am reeling. The dynamic of this family is nothing like mine but the feelings are exact, so well written and the performers were great, especially Santino Fontana. I usually listen to one book right after the other...but I'm going to give this some time to sink in...I'm hurting right now but I needed this because as much as I went through with my mom...I know we adored each other! I will listen to this author again, but not for awhile, so good but hit a lot of old wounds. The end result will be awesome and enlightening, no matter what there is nothing like family!!!!

Overall, I greatly enjoyed this book. I liked how the author described people with fine detail, and the sense of place was beautifully drawn-I felt like I was there in Portola Valley. The plot follows the inner lives of its characters; it is not driven by outer events. Packer has created a slow meditation on themes of family life, estrangement, both from others and self, and redemption, quietly delivered. It’s true protagonists are James, the fourth child who lost out on the love of a mother, and that mother, whose name embarrassingly escapes me now.

If you are a reader who prefers fast paced action and an exciting, page turning plot, you might not enjoy this novel. I read “A Dive From Clausen’s Pier” before this, and wondered where Packer was going with the narrative. I was surprised by the ending, which gave me an enjoyable understanding of her storytelling. Both novels show a love and positive outlook on humanity, a refreshing change to the current trend in popular dystopian fiction , which I also enjoy.

The narrative is excellent. All the voices are read naturally,not over dramatized, which distracts from the language.

This book was not for me. Because of this, I can't state that it was bad or good; I can only state that I did not like it. The story unfolds through the eyes of a melancholy man that looks to his past and present while describing what he has seen, sees, and feels.

The problem is that it is not very enjoyable to see life through the eyes of a desolate man.and reading a chapter in a desolate man's voice becomes a sing-song drone. I only made it through three hours. The book may have gotten better as the main character got better, but I just could not listen any longer.

she tells the story from each child and adults perspective in a way that draws it all together and uncovers the truth of families.

A book I would listen to again

I really enjoyed this book and would even listen to it again, which given how many other books I want to listen to is saying a lot. The relationships between the family members seemed so real to me and I found myself bookmarking sections and wanting to share them with my children. I enjoyed the different narrators and found myself unable to stop listening. I would highly recommend this book.