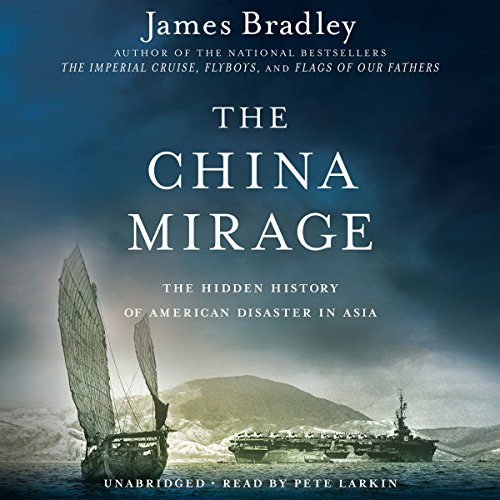 Written by: James Bradley
Narrated by: Pete Larkin
Try for $0.00

From the best-selling author of Flags of Our Fathers, Flyboys, and The Imperial Cruise, a spellbinding history of turbulent US-China relations from the nineteenth century to World War II and Mao's ascent.

In each of his books, James Bradley has exposed the hidden truths behind America's engagement in Asia. Now comes his most engrossing work yet. Beginning in the 1850s, Bradley introduces us to the prominent Americans who made their fortunes in the China opium trade. As they - good Christians all - profitably addicted millions, American missionaries arrived, promising salvation for those who adopted Western ways.

And that was just the beginning.

From drug dealer Warren Delano to his grandson, Franklin Delano Roosevelt; from the port of Hong Kong to the towers of Princeton University; from the era of Appomattox to the age of the A-Bomb, The China Mirage explores a difficult century that defines US-Chinese relations to this day.

What listeners say about The China Mirage

Hard to stop listening as myths were debunked with credible facts presented in detail making the book easy listening.

I was intrigued by the first part of this book. The first insight was about Japan’s back door policy with the U.S. This is in regard to Theodore Roosevelt’s Nobel Prize for negotiating a peace settlement between Japan and Russia, with Japan being the puppet master and the Nobel Academy knowing nothing about Japan’s secret role in getting T. Roosevelt involved in the negotiation process of the Russo-Japanese peace settlement after the breakout of war in 1904.
Another intriguing insight from the book was the story of Henry Luce, the founder of Time Magazine. The most interesting part of this was the facts the author laid out with stories printed in Time Magazine that were fabricated during the 30’s and 40’s. We can now attest to the fact that “Time” never changes. They continue to pass opinion off as fact.
However, even with those two neatly told stories does not add up to Mr. Bradley’s crumbling thesis of this book. This is why I cannot in good conscience provide a decent rating for this book. The conclusions are absurd! I am not a history professor. But I am an avid reader. I listened to or read over 120 books in the past two-and-a-half years. At least one-fourth of them have to do with the World War II era. So in my lifetime, I can say that I have read at least 100 books connected to this era of history, so I am not ill-informed.
The thesis deals with three things that strike me as gross negligence in writing on a subject of this sort.
1. Bradley claims that the USA would never have had to go to war with Japan if Franklin D. Roosevelt’s underlings would not have stabbed him in the back and stopped selling oil to the Japanese. He seems to posture that all we had to do is feed the Japanese war machine with oil to take over much of Asia and all would have been fine. Seriously, I am not making this up! There was practically no mention of the Japanese “Rape of Nanking”, in 1937. What about the horrific deeds the Japanese did to the populations in Asia during the expansion of territory during the Greater East Asia Co-Prosperity Sphere.
2. Chiang Kai-shek bad guy; Mao Zedong good guy… what? I am not making this up! This is the cornerstone of Bradley thesis of the book. He speaks of how Mao was such a great leader and how horrible Chiang was. Look, I realize that Chiang wasn’t a great leader. But he had the backing of the China lobby. The USA is the only reason why he got any backing at all. Bradley claims that FDR totally supported both Chiang and Madam Chiang. It is a fact that Roosevelt became so enraged with some of the things that Madam Chiang said to the press that he wanted her out of the White House ASAP and sent back to China. Oh, that little fact was NEVER mentioned. Bradley picks his “facts” carefully, leaving out the ones that don’t fit the narrative.
I don’t even have time to get into the wrongdoings of Mao. The only people that see Mao as a great savior of the Chinese people is ardent communists. Then Bradley brings one of the most controversial person’s that worked in the State Department at the time, John Stewart Service. Well, the plot thickens. Of course, Mr. Bradley seemed to leave out some details of John Service’s treasonous behavior. This has been totally fact-checked with books written about the Venona decrypts (The NSA project to decrypt the messages of the Soviets during the cold war). It is a known fact that Service wasn’t just a communist sympathizer, he was a known Soviet agent. Well, none of that was ever mentioned in the book. See, the way Bradley tells the story, Service, son of a diplomat that grew up in China, was so impressed by Mao. It didn’t matter that Service didn’t follow orders by the State Department, Stewart was just trying to correct a fatal flaw in US policy, etc. It sickens me to even go on about this.
3. Here is the icing on the cake! FDR performed the disgraceful act of creating an illegal Chinese Air Force, backed by the USA, known as the Flying Tigers. OK, I have read a lot on this subject. With one swoop of the pen, we get how terrible it was for the Flying Tigers to have existed, with them helping to halt the otherwise unchecked advance of Japanese troops in China.
Mr. Bradley asks a question: If his father knew about the China lobby, which created the China Mirage, what would he have thought about this situation. After all, his father (may God rest his soul) was one of the flag raisers on Iwo Jima. This account was vividly brought to life in Bradley’s book “Flags of Our Fathers”. I feel I can speculate on how his father would have responded to the thesis of this book. I am sorry to say that Mr. Bradley has lost his way as a historian, after publishing “Flags of Our Fathers”.
This book was EXTREMELY disappointing! My apologies to all service members (which includes me) that have fought and defended this great country. Keep browsing, you can do better.

Thought provoking, challenges what you thought you knew about Americas wars in Asia. Highly recommended

A must read for Asians and Americans

What made the experience of listening to The China Mirage the most enjoyable?

The pacing of the story and the clarity of delivery.

How Time / Life / Fortune has manipulated people's minds through generations by slanting the news to favor the beliefs of its founder - a tradition that is carried through by today's writers in these magazines.

Which character – as performed by Pete Larkin – was your favorite?

How the Deep State of the time worked to favor their own interests and in so doing has changed the course of history in Asia and America.

I found the content compelling to change my view of history as it relates to the current relationship we have with China over the last 140 years. Sometimes the book went into too much detail for the story to flow well, however I am happy that I bought the book and it was worth listening to.

Whereever Bradley got his information and how he perceived it is remarkably insane. His views on Mao are absurd. Does Bradley really think Mao became a psychopathic murderer because the US spurned him. The premise and content of this book are a joke.

James Bradley’s thoughtful book on the complicated relationship between the USA and China- really the Far East- is required reading, in my opinion.

Loved it. Well worth the listen. Provides interesting perspective on formative phases of American foreign policy.

I'm a big Bradley fan but this is so slow moving that I had to stop.

Excellent book and a must read for anyone interested in understanding US-China relations and todays continued struggles to find common ground.

Unfortunately many Americans, myself included, are ignorant of my country’s meddling in Asian affairs for over a century. This book sheds light on the folly of American policy makers who repeat the same mistakes over and over again while damaging relations in the long run- often leading to military conflict and horrendous human cost.

Anyone who reads this book will come away with a better understanding of many Asian nations reluctance to trust the US. Meanwhile, our US foreign policies continue to be tone-deaf to the long history and complex cultural societies within China, Japan, and throughout Asia.

This should be a must read for every Senator on the foreign relations committee, every official in the State Department, and any elected official with dealings in Asia or China. Sadly, it won’t be.