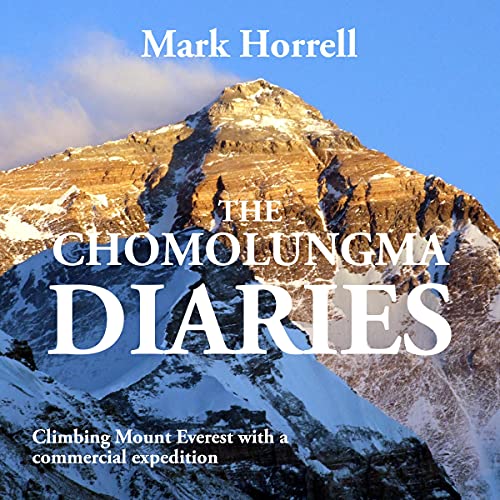 In April 2012, Mark Horrell travelled to Tibet hoping to become, if not the first person to climb Mount Everest, at least the first Karl Pilkington lookalike to do so.

He joined a mountaineering expedition which included an Australian sexagenarian, two Brits whose idea of hydration meant a box of red wine, and a New Zealander who enjoyed reminding his teammates of the perils of altitude sickness and the number of ways they might die on summit day.

The media often write about Mount Everest deaths and how easy the world’s highest mountain has become to climb, but how accurately does this reflect reality?

The Chomolungma Diaries is a true story of ordinary people climbing Mount Everest with a commercial expedition, and preparing for the biggest day of their lives.

Imagine your life clipped into a narrow line of cord five miles above the Earth, on the world’s most terrifying ridge walk. This book will bring you just a little bit closer to that experience.

The Footsteps on the Mountain Diaries are Mark's expedition journals. They are edited versions of what he scribbles in his tent each evening after a day in the mountains, with a bit of history thrown in. Lighthearted and engaging, they provide a perfect introduction to life on the trail.

He has published two full-length books: Seven Steps from Snowdon to Everest (2015), about his 10-year journey from hill walker to Everest climber, and Feet and Wheels to Chimborazo (2019), about an expedition to cycle and climb from sea level to the furthest point from the center of the Earth.

What listeners say about The Chomolungma Diaries