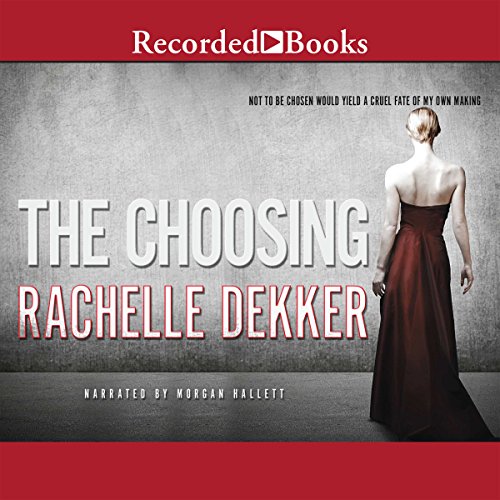 Like all citizens since the ruining, Carrington Hale knows the importance of this day. But she never expected the moment she'd spent a lifetime preparing for - her choosing ceremony - to end in disaster. Ripped from her family, she'll spend her days serving as a lint, the lowest level of society. She knows it's her duty to follow the true way of the authority.

But as Carrington begins this nightmare, rumors of rebellion rattle her beliefs. Though the whispers contradict everything she's been told, they resonate deep within.

Then Carrington is offered an unprecedented chance at the life she's always dreamed of, yet she can't shake the feeling that it may be an illusion. With a killer targeting lints and corruption threatening the highest levels of the authority, Carrington must uncover the truth before it destroys her.

What listeners say about The Choosing

Wonderful perspective yet missing something

Isaac is presented as an accurate portrayal of the killing nature of the law but there is something missing in the redemptive side presented by Aaron. It seems to lean a little towards predestination theology. We are all indeed chosen but we need to chose to follow as well and accept redemption from Gods grace, not from hollow works of man. Still, the knowledge that we are indeed perfect in His sight is refreshing, even if the story glosses over actual Biblical truth a little.

You go girl. You keep on writing about the hope we have in Christ and you will never fail!!

Thoroughly enjoyed the story. Wonderful narrator. What a wonderful message for young women...or anyone actually. I am worthy because of HIM.

I really wanted to like the book! But, the story was predictable and the female characters a bit dramatic. I did find it interesting, but definitely not edge of my seat.

As far as the religious aspect, I'm left wondering what Rachelle Dekker believes. I read this because it's represented as Christian fiction. Is she pushing self actualization? As another reviewer wrote - new age? The book definitely does not talk about our need for a Savior. That we are born with sin. We aren't good - the book suggests we just need to see that we are. We are created, but we have to turn to God and ask forgiveness for our sin and accept Christ's sacrifice on the cross for us.

The only person quoting scripture is the murdering psychopath.

I think this book sold as Christian fiction muddies the water for anyone searching for real Truth - Jesus Christ.

I won't be reading the follow up novels for a combination of all these aspects.

Will be reading the sequel.

Yes I would and have. I think it is well written, entertaining, and romantic. I did not want to put the book down so both read it and listened to it.

I can see her father's influence in her writing. That is a positive thing because I love Ted Dekker's books. The Choosing immediately drew me in just as his do.

It was a great book, it left me looking forward to the next one and more by Rachelle Dekker. She is her father's daughter, and his influence in her writing is obvious if you know him. The deranged male antagonist, who thinks he is holy and his actions are what God has called him to do is a prime example. I personally wished Rachelle had gone another route. We've seen this many times in Ted's books, i.e. Boneman's Daughters and The Bride Collector.
I feel the Christian storyline she's trying to develop is lacking. I find it weak. It's all about being loved by our Father, and nothing about conversion, repentance and redemption. Don't get me wrong, I do believe the Father loves us all equally, but I also believe that repentance is necessary. and this story had nothing to with repenting or sin, it was simply that if you believed the Father loved you and you are chosen by Him, then that's enough.
Would I recommend this book? Yes, highly.

This book couldn't've made me happier! Since I discovered Ted Dekker's writing back in 2010 he's been my favorite author! I own all his books (on audio) and quite a few physical copies. My only regret being a Dekker fan was that he couldn't produce books fast enough... Now we have his daughter, Rachelle, writing too! Amazing!

She had huge shoes to fill knowing that everyone would compare her works to her father's.... And the interesting thing is that even though this book is purely Dekker, it's also purely her own! I see similarities in writing styles, themes and key phrases, but at the same time it's a fresh story!

I won't divulge any secrets here... I hate the fact that she's willing to kill off a favorite character :-( but at the same moment I admit it kept it real - no one is ever safe, the book is never dull, and the ending is, is, well... You've just got to read to 'see' ;-)

I enjoyed her story. Well written for the most part. The hero is a little overdramatic at times.

I was disappointed that the story had to include the overly religious zealot character who kills women in his delusion same as Ted Dekker has used too much in his fiction. I wish she would have created a different kind of antagonist.

This story is very much like her father's writing.

I enjoy the themes of redemption and freedom from fear that are conveyed in this story. We truly are free if we dwell on what God thinks of us instead of our peers.

This books had a bit of a slow start, just setting the scene, but then...it got better and better and I could not stop!! So keep foin!! So well written and so intriguing!! Great read!!

I thoroughly enjoyed listening to The Choosing! I had a hard time stopping the story. The message of value was woven throughout the book, inviting me to reflect on where I get mine. I'll read every book written by Rachelle Dekker!

one of my favorites

I can't wait to read the next book. even though it is fiction, it helps you see your own identity. I cannot express how much I love this book and author!