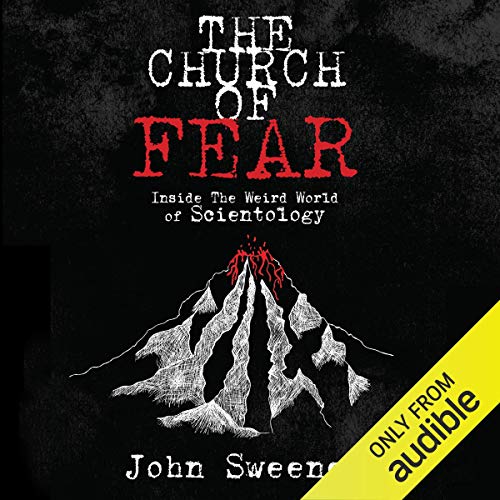 What listeners say about The Church of Fear

This book is an account of the author’s experience researching and filming an investigative journalism tv program about Scientology. It’s VERY, VERY GOOD!!! He provides research references, including a number of scholarly publications. Also, the author’s personality is great; adds some comedic relief to a very serious story.

Listen to/read the book "Going Clear: Scientology, Hollywood, and the Prison of Belief" before tackling this book. "Going Clear" will give you a solid background into the history of LRH and the Church as well as several of the higher-ups, places and activities described in Church of Fear. I say the book is tedious to listen to because Sweeney spends much of the book reading transcripts of his interviews where people are constantly interrupting one another and speaking in sentence fragments. These interviews would be difficult to follow if you could see the different people talking. When it's just Sweeney reading all the parts it's a mess. If you have some background with the story of Scientology it will make some sense. If you are not familiar with the COS then it will simply be incredibly confusing.

I gave it three stars which is probably generous. I did that because what does come through is just how disturbing this experience was for Sweeney. Sweeney comes off as very authenticate. If Sweeney had made an effort to provide his readers/listeners some context for the Church and the interviews it probably would have worked. As it was, I'm sorry I wasted a credit even though I purchased it on the 3 for 2 deal.

Where does The Church of Fear rank among all the audiobooks you’ve listened to so far?

It would rank a 3 for me. I haven't read a lot about this subject, but I am trying to get a grip on the subject. Most of the books on this subject seems to repeat the others.

Hard at times to keep up with who is saying what. Speaking very fast.

What does John Sweeney bring to the story that you wouldn’t experience if you just read the book?

I don't think I would have read very much of the book itself..

As most people, I believe, knows that scientology is a cult. Why is the FBI doing nothing about it. Any church I go to does not ask my past or record my confessions. I know they are teaching from the Bible. Your personal choice is to believe or not believe.

The books I have listened to so far bring Tom Cruise and John Travolta up a lot. They are not the only people in scientology. I have seen a lot of clips with Tom and he does seem to be a little off in the head. But John seems to just keep away from the press getting on with his life and his loss.

Writer lost me early on after the claim that somebody stuck two sticks of dynamite up his nose. I went as far as Googling him, thinking he might have oversized nostrils. he doesn't. Performance is dreadful as well.

North Korea undercover is much better

I got this book because I found his book on north Korea to be eye opening.
This book is not nearly as good.
It reads like bad daytime TV and doesn't give you the feeling of objectivity.
I'm not a member of the organisation in question, nor have I ever been. But it's defenders in this book have a point: it does seem as if Sweeney came in knowing the story he wanted to tell, rather than attempting to find fact.

If he were interested in truth (rather than an exposé) then I believe he would have dealt with people differently.

In his defence, I'm not a journalist and maybe his approach is normal.

But it didn't sit well with me.

I'll be returning this one.