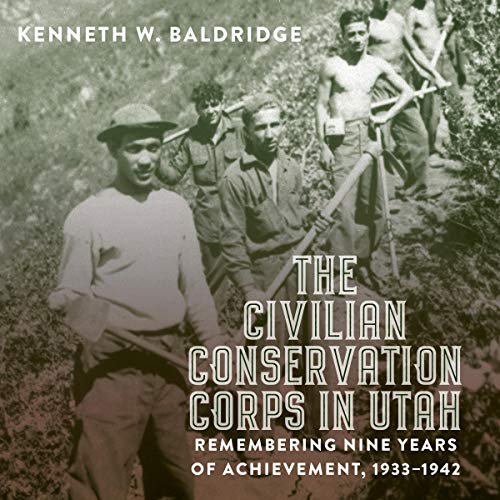 “There was a certain magic about sending young men into the woods. It was not so much man against nature as it was man in league with nature against the economic troubles that were then stalking the land.” (Excerpt from the book)

In 1932, unemployment in Utah was about 34 percent. Nearly every state west of the Mississippi River was struggling not only with unemployment, but also with drought, erosion, and overgrazing. To solve these serious difficulties, President Franklin D. Roosevelt launched what would become arguably the most popular of his New Deal programs: the Civilian Conservation Corps (CCC). From 1933 to 1942, the CCC employed three million young men on land-improvement projects that are still used today.

In this book, Kenneth Baldridge chronicles the work of the 10,000 men who served at Utah’s 116 CCC camps. With facts and anecdotes drawn from camp newspapers, government files, interviews, letters written by enrollees, and other sources, he situates the CCC within the political climate and details not only the projects, but also the day-to-day aspects of camp life. For $30 a month - of which $25 was sent home to their folks - these young recruits planted trees; built roads, bridges, dams, and trails; fought fires; battled pests and noxious weeds; and erected cabins, campgrounds, amphitheaters, and reservoirs, and more.

Today, the CCC is credited with creating greater public awareness and appreciation of the outdoors. It has also served as a model for the Student Conservation Corps and other youth programs. This volume documents the public good created by the CCC and provides an extensive bibliography.

What listeners say about The Civilian Conservation Corps in Utah, 1933-1942