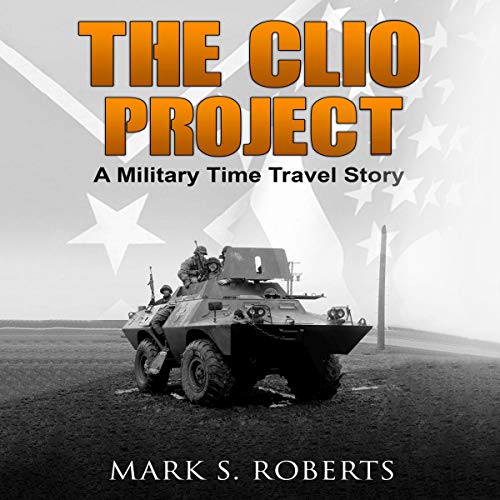 Technical Sergeant Scott Rees figures this will be just another hot August day on base for him and his team of United States air force security policemen. Little do they know they are about to become subjects in a top-secret time travel experiment, forcing them into a fight for their lives in the middle of the American Civil War. Major General Richard Lucas and Chief Master Sergeant Joe Black want more time to test the Clio time machine before putting it into use, but their request falls on deaf ears as impatient government officials push forward.

The incompetence of a key technician and a power grab by his senator uncle have thrown the project into chaos, leaving the security policemen caught in the middle. Now Rees and his team face a double-barreled race against time to escape the past and almost certain death.

What listeners say about The Clio Project: A Military Time Travel Story

The narrator is so bad I couldn’t listen.


This is the first time I have ever taken the time to review a book. I feel compelled to do so simply because the narrator on this book was so bad that it’s unlistenable. He reads at a breakneck pace and slurs his words in a way that makes him almost sound intoxicated. I tried using the app to slow him down, but the slurring of words together just Gets worse. I can offer no comment as to the book itself because I just couldn’t get past this narrator far enough into the book to form an opinion of the story. I gave it one star simply because the app forces you to give it a rating.

I hate to be rude but this narrator is horrible. This is a type of story I love and honestly I can't tell if it's good because the speed and tone of the narrator is horrible. It's like a mix of an auctioneer with Eugene levy monotone. Way to fast to follow properly i really wanted to like this.

This story will draw you in from the start! Anyone who worked in the AF Security Forces/Security Police/Security Specialist career field will appreciate the authenticity of this story. Well done Mark! It was a pleasure serving with you!

I tried to listen to this story at .75 speed to make the narrator easier to listen to. Can't finish. Didn't work. Waste of a good credit.