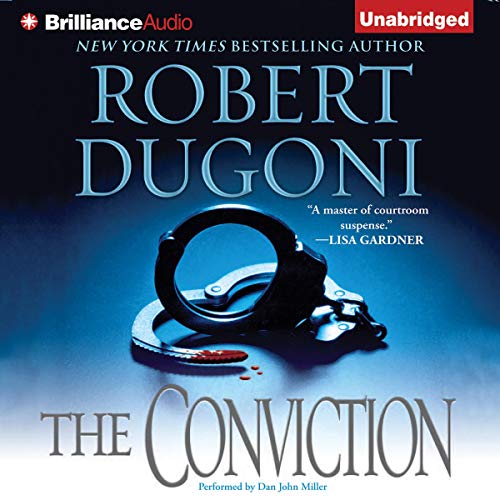 In this exhilarating legal thriller from Robert Dugoni, the #1 Kindle bestselling author of MY SISTER'S GRAVE, attorney David Sloane must take the law into his own hands to save his son from a corrupt juvenile detention center.

As David Sloane continues to piece his life back together in the wake of his wife's vicious murder, he also struggles to handle his difficult teenage son, Jake. Reeling from the loss of his mother, Jake's bad behavior escalates and his relationship with Sloane is pushed to the brink. When Sloane's old friend, Detective Tom Molia, recruits Sloane and Jake to join him and his son on a camping trip, Sloane sees the trip as an opportunity to repair their broken father/son bond.

But the trip takes a distressing turn when the boys are arrested for vandalism in the middle of the night and the local judge, Earl Boykin, hastily sentences them to the "Fresh Start" detention program in the middle of the wilderness. Jake soon realizes the facility has little interest in rehabilitating wayward youths, beginning what will prove to be a grueling ordeal.

Sloane's legal expertise is rendered useless in overturning the boys' conviction, as he discovers that Judge Boykin's power reaches far beyond the courtroom. Finding their legal options limited and their sons in mounting danger, Sloane and Molia will stop at nothing to rescue their boys...the law - and their own safety - be damned.

New York Times bestselling author Robert Dugoni is in top form in this riveting tale of risk and redemption.

"Dugoni is a superb storyteller, and his courtroom drama shines." - The Boston Globe

"Dugoni is knocking on the A-list legal-thriller door and can be expected to gain entrance sooner rather than later." - Booklist STARRED Review

"Serves up the perfect mix of action, emotion and courtroom drama, so much so that THE CONVICTION isn't just the best legal thriller of the year, it's one of the best thrillers period." - Author Magazine

“With each new novel, Robert Dugoni continues to prove both his talent and his craft. His books remind me of the best of John Grisham - only better! Read him now!” (James Rollins)
“Dugoni has often been described as a challenger to Turow and other big names in the legal-thriller genre, but at this point, he’s claimed his own position on the A-list. A must read for fans of courtroom drama, from Grisham to Turow to Erle Stanley Gardner.” ( Booklist)
“A master of courtroom suspense.” (Lisa Gardner)

What listeners say about The Conviction

Another Good Installment To The Series

This one of the best books I have listened to from Robert Dugoni. I was unable to put this book down.
In 'The Conviction' lawyer David Sloane gets his step-son for the summer. The join in a camping trip with David's detective friend and his son. They travel to a small town which appeared quiet and peaceful which the men needed. The two boys do what boys do and get arrested and shipped off to a rehabilitation camp. The process of arrest, court, and punishment goes so quickly that David and his buddy don't know what happened to their boys. While trying to get the truth of where their boys are they learn more than they wanted to about the judge and his court.
There is some violence that is encountered both by the men and their sons. One son is pushed exceedingly hard to break him. You feel for him. But going through the experience is worth it. Listen to the book and learn what it takes to have a great kid, and the justice system, well......

Dan John Miller was outstanding with the delivery of the story

The Conviction is Book 5 of Robert Dugoni's attorney David Sloane series. There are lots of action and suspense; there is more outside the courtroom than inside. The bad guys are a judge and a sheriff among others. The victims are teenage boys caught up in a crooked legal system in a rural.California county. In the end it is a feel good story where the good guys win, the bad guys pay the appropriate price, and a troubled teen, Sloane's stepson finds his way. The story is a bit simplistic resulting in a 4 star rather than a 5 star rating .

This is an excellent feel good book..

A Fishing Trip Takes A Turn For The Worse

Although this story is a bit too simplistic and contrived in places, it was nevertheless a good "feel good" story when it was all said and done. It's about law enforcement corruption and greed.

This story has lots of action and suspense. There is more drama outside the courtroom than inside even though what happened inside the courtroom left me slack jawed... A real kangaroo court. The bad guys ruled the courtroom from the judge to the sheriff and others. The victims are teenage boys caught up in this rural California legal system.

I'm a new fan of Mr. Dugoni and love the David Sloan series. Purchased this one yesterday and could not put it down until I finished it today.

Just Too Hard To Swallow

I am old enough to know that truth is stranger than fiction. So while I found this story too bizarre to enjoy a great deal, I readily admit it could happen.

Imagine a modern day, small, rural county in the California mountains run by a wealthy man, enabled by a judge and other legal representatives to expand his empire on the backs of teenage boys. This novel is a grand conspiracy to say the least.

What saves this story is a great villain in the judge and the clever legal mind of the main character. It left me wishing there was more legal wrangling. The author also does a wonderful job in seeing the revenge or comeuppance all the way through.

Frankly, after listening to half the book, I skipped to the last 3 chapters.

I love it when the evil ones get their comeuppance . Well written with good action in and out of the courtroom.

Robert Dugoni has out done himself with this one.

Would you listen to The Conviction again? Why?

I would listen to The Conviction again. This book is an action packed, edge of the seat, I can't put it down thriller. There are so many twists and turns that I would listen to it again to see if I missed anything the first time through. I listened to this in two sittings on a long drive, to and from San Francisco! I just couldn't stop, it was too exciting.

What other book might you compare The Conviction to and why?

I could compare it to the Jack Ryan novels by Tom Clancy but those are a yawn compared to this book. I would actually compare it to the movie Taken. I don't know if it is in book form too, but the movie was very exciting and I was on the edge of my seat through out. I felt that way with The Conviction too. I have read all of Dugoni's books and this is my favorite, so far!

Which character ??? as performed by Dan John Miller ??? was your favorite?

It was a book I wanted to listen to in one sitting, I just didn't have the time.

This book can be read without reading the other David Sloane books by Robert Dugoni. The way Dugoni writes, you can read his books in the order written or you can read them as a stand alone. I will guarantee, if you read this book you will want to read all of Robert Dugoni's novels. What a thrilling writer. I wish I had his genius!

When will this book be made into a Movie?

What did you love best about The Conviction?

How the story unfolded and ended.

What was one of the most memorable moments of The Conviction?

What about Dan John Miller’s performance did you like?

Everything! How his voice conveyed the climate and tone of each scene. The intensity of Jake and how he stopped being self centered and thought about TJ. Each character had a distinctive voice.

What made the experience of listening to The Conviction the most enjoyable?

Being familiar with the characters, and the performer, made it come to life. It was like being with old friends.

Which character – as performed by Dan John Miller – was your favorite?

His ability to create distinctively different sounding voices for so many characters amazes me, Each one fits the character and brings such authenticity! I think David Sloan's and Detective Molia's are my favorites.

It was hard to "put it down", so to speak, when we needed to do other things.

I'm quite entranced by Robert Dugoni's ability to tell a story. At first, I was interested because I'm from the NW and have been to the same places and restaurants (the Tin Room, etc.). However, after reading the first book, I continued with ALL of his other books because I just love his characterization and how his stories unfold.

It doesn't surprise me that the David Sloan series stops with this book. I could hardly wait for this unconvincing bag of improbabilities to end.

We are in a different world from that of previous Sloan novels -- more Jack Reacher's than Sloan's, and I much prefer the way Reacher deals with such a world. The legal elements here seem forced and almost irrelevant. The premises are contrived, as are the events, characters, and coincidences. I felt this novel to be 'all wrong' in a way I did not with other Sloan novels. What passes in Reacher novels does not in a Sloan one. My impression is that Dugoni had an intriguing idea that he was loath to discard, and ended up exercising his ingenuity in making something unwieldy into a marketable addition to a successful series.