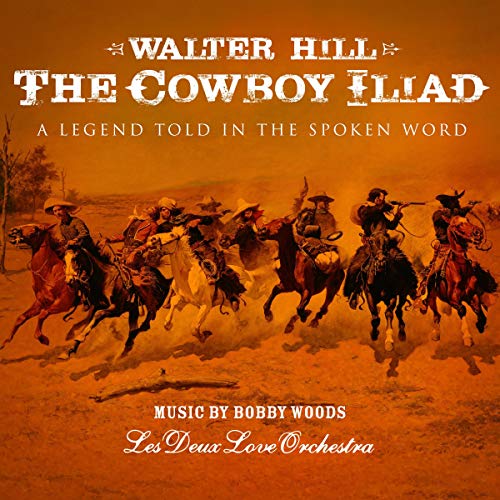 Writer/Director Walter Hill, well-known for his westerns (The Long Riders, Geronimo, Wild Bill, Deadwood, Broken Trail), tells the story of a shootout that occurred in Newton, Kansas in 1871, and its legendary aftermath of violence and controversy.

“The Cowboy Iliad reaches back to the spoken tradition of storytelling - designed to have no simple resolution, but a mix of history, nostalgia and speculation. And, of course, we wanted to honor the tradition of the Western.... In other words, Bobby Woods and I had a couple of shooters and made a record.” (Walter Hill)

Hill makes his recording debut at the age of 77, and, for the first time, his writing is presented using his own voice.

Hill began his film career as screenwriter, notably working with filmmakers Sam Peckinpah (The Getaway) and John Huston (The MacKintosh Man). He made his own directorial debut in 1975 with Hard Times starring Charles Bronson and James Coburn. In the years following, he directed many films, including The Driver, The Warriors, Southern Comfort, 48 HRS., Streets of Fire, Red Heat, Johnny Handsome, Last Man Standing, Bullet to the Head, and most recently The Assignment.

Hill also served as a co-writer and co-producer on the first three Alien films.

The Cowboy Iliad is written by Walter Hill. The audio book is produced by Bobby Woods and features music performed by Les Deux Love Orchestra.