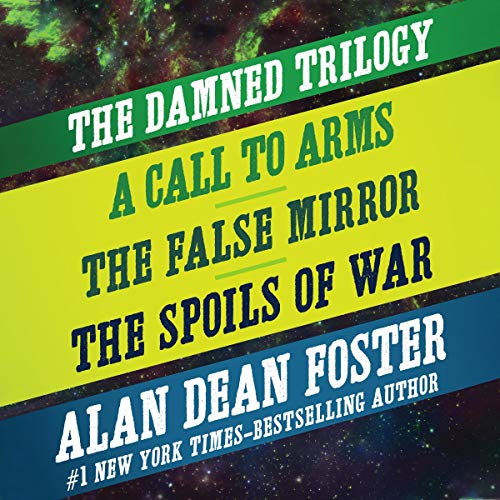 Humans are caught up in an alien war in this epic from the #1 New York Times–bestselling author of Star Wars: The Force Awakens and Star Trek Into Darkness.

For millennia, the Weave, an alliance of species, have fought to resist the telepathic Amplitur, who strive to unite all self-aware life-forms in their great "Purpose." The Weave is slowly losing ground, but for both sides, warfare focuses more on outthinking and outmaneuvering your foe than destruction. In fact, most regard violence as hideously barbaric, and even the thought of harming another sentient being is beyond imagining.

A Call to Arms
When one of its scout ships lands on Earth, the Weave quickly realizes that humanity's almost innate ability to wreak havoc and death may hold the key to turning the tide in their fight. Unfortunately for all, the Amplitur have the same idea—and mankind is caught in the middle.

The False Mirror
When the Amplitur unleash an elite cadre of fighters, it soon becomes clear that they have subjected their human prisoners to horrific genetic manipulation. But if the Weave attempts to undo the effects, they may change the former warriors into something far, far worse.

The Spoils of War
With mankind's help, the Weave is finally on the verge of victory against the Amplitur. Until an alien scholar uncovers a terrifying truth: Earthlings might not even be capable of being civilized—and a shadowy group of powerful humans is already poised to unleash war across the entire galaxy.

What listeners say about The Damned Trilogy

A unique look at mankind

There's no grand space battles describing naval style tactics and detailed ground battles which is what I expected, but thats not a bad thing. I was glued to this trilogy since I started it, it gives a unique look at mankind and how we could be viewed and how we could fit in to a universe filled with intelligent races. Well worth the money.

Although I didn't care for the main human character in the first book, don't let that stop you from enjoying the trilogy if you feel the same way.

Been waiting for years for this audiobook

I have been waiting for this book for many years to come out on audiobook. The story is good and my biggest worry was they were going to get a bad narrator to do it thank God this one was good.

This series has always been one of my favorites.

I grew at a time when books and movies were constantly centered on how inherently violent humans were and how we were not ready for any contact with what must be "civilized" alien races. Books like Childhood's End and movies like The Day The Earth Stood Still were constantly referring to how uncivilized we were and how dangerous to any other intelligence we would be, so when I first came across this series I was struck how Alan Dean Foster had turned the whole notion of how warlike we were on its head. Maybe we were a danger, but maybe we were also the salvation of all of those "civilized" aliens. I still have the 3 books in paperback but when I realized that the series was available on Audible I immediately bought it and spent a week listening.

The story, of course, involves aliens who have been involved in a thousand year war stumbling across humans in their attempt to find allies against the mind controlling alien race at the heart of the enemy. Since all civilized races are largely incapable of violence they are hoping to find a new planet where the people might provide some kind of help, even if only providing supplies. Instead they find humans whose basic natural talent is to fight wars and the civilized races are torn between the need for human soldiers and the fear of any race that actually enjoys violence. As delightfully ironic as the plot twist is, there is little actual violence in these books as the story is one of contact between the races, the attempts of the humans to convince the aliens that they are civilized and the struggle the aliens have in dealing with humans.

There is a great deal of character development, considerable politics and little actual fighting so if people are looking for space battles and violent conflict they should look elsewhere. There is a great deal of conflict in these books, but it is not the kind you normally see in space operas. Rather, it is the conflict between the beliefs of all of those involved from the ultra peaceful Wais who may go catatonic if faced with violence to humans who often revel in violence. The war has been going on for a thousand years because everyone is so civilized that they do not use any excessive force. All of that would change if humans became involved.

The narration is adequate although I could not help but wonder what RC Bray might have done with this series. If you want thoughtful first-contact stories this may be just your cup of tea.

A good series I was happy to find on audio book.

I really hate when the aliens are bigger and meaner than us. I truly think many SyFi authors suffer from small winki syndrome. Finally in this book, mankind is the meanest and overall strongest versatile creatures in the universe. The theory that as a space faring society would be peaceful and would not make war is included in these books but who do you call when you need to go to war.

This series is, at its core, a study and report on humanity when 'exploited' to do what we've been doing since the beginning of our civilization. Wage war.

There is the Amplitur alien species. The only known alien species capable of some form of telepathy. They use this 'gift' to 'influence' other alien species to their side to assist in fulfilling what the Amplitur deem "the purpose". The purpose being something eerily close to a religious belief, the end objective being to unite all intelligent life in the galaxy and eventually the universe. Sounds nice, until you realize the Amplitur are using their abilities to mentally 'suggest' to other species to side with them and their purpose, giving those other, lesser civilizations no choice in the matter. And if they don't get what they want through mental suggestion, then either force of arms or biological manipulation are employed. In the end, the Amplitur get what they want, regardless.

On the other side is the Weave. A federation of aliens that formed an alliance with the sole purpose of fighting off the Amplitur to retain their independence.

With that bit of background, the main premise of the series is this: Almost none of the alien species are capable of violence. To most alien societies, to be violent, is to be inherently uncivilized. The Amplitur have modified several of their recruited/allied races in order to be more capable and proficient in combat where they otherwise wouldn't be. For the Weave, it is only the Massood that are capable of fighting, and they do so reluctantly.

Enter Humanity. Looking for new allies, the Weave discover Earth and realize that humans could be a huge boon to the war effort. Evolving as predators on a deathworld and a mindset in which they seem to actually enjoy fighting.

One thing to keep in mind is that almost all of the fighting takes place on the surface of contested worlds. Space battles, while they do happen, very rarely result in the destruction of ships, as they almost always retreat to underspace to either leave the area or conduct repairs. Most efforts are spent sending soldiers to the ground in order to wrestle control of the world from the enemy, either to prevent the resources from being used by the other side, or to liberate the populations on said planet. It is a war of ideologies more than anything else, with both sides wanting to recruit allies and prevent xenocide of any kind.

Overall, I found the story enjoyable and different from what I'm used to, with the caveat that it's predictable and generic, with some admittedly cheesy dialogue at times. I absolutely loved the narrator. Every character sounded completely different and whether male or female, human or alien, they were all 100% believable.

Don't go into this expecting some amazing, flawless, and intriguing novel that makes you think. No, this is humans being recruited for war and about how the galaxy is now dealing with the one, known species that revels in it. And that's how it is all the way through.

foster got a new thesaurus for this set. it gets obnoxious. ok story though a bit tired

Just a lot of talking with little actually happening, even with the story covering centuries. Every character talks the same, and they all try to cover all the angles if everything they are talking about. Forced myself to finish, kept hoping it would suddenly get better. It never did.

Can’t finish this. Too slow and boring for me. Maybe just not my “cup of tea”. Made it through first book but can’t take any more after first chapter of second book.

Too dull for words

I got half way through the first book of this trilogy. I would rather have a colonoscopy than finish the book.

The idea behind the first book had promise but I had to struggle thru it. I'm just not into harping on the human propensity to violence over and over.
Stopped less than halfway through the second because it's more of the same.
Might get better but I don't feel the need to put in the work.

I thought the premise for this series of novels was fairly unique in that you don't usually find stores about humanity coming in contact with advanced alien races in which it turns out the humans are the scariest beings in the story. It was a fun concept. Add to that, the fact that the story was written by a very good author and you have a trilogy that is quite enjoyable to listen to. I especially like the variety of alien species conceptualized for the story. I recommend the series.