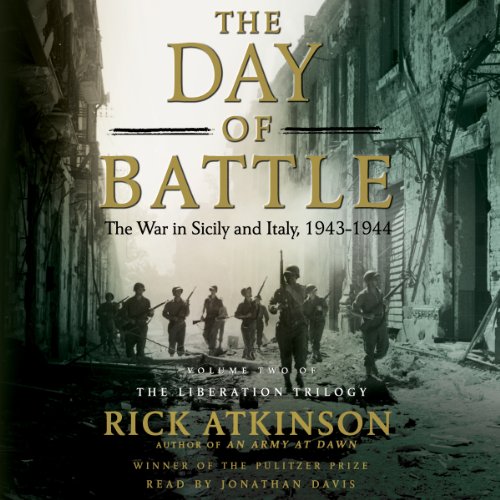 The Day of Battle

Written by: Rick Atkinson
Narrated by: Jonathan Davis
Try for $0.00

In An Army at Dawn - winner of the Pulitzer Prize - Rick Atkinson provided a dramatic and authoritative history of the Allied triumph in North Africa. Now, in The Day of Battle, he follows the American and British armies as they invade Sicily in July 1943, attack Italy two months later, and then fight their way, mile by bloody mile, north toward Rome.

The Italian campaign's outcome was never certain; in fact, President Roosevelt, Prime Minister Churchill, and their military advisors bitterly debated whether an invasion of the so-called soft underbelly of Europe was even wise. But once underway, the commitment to liberate Italy from the Nazis never wavered, despite the agonizing price. The battles at Salerno, Anzio, the Rapido River, and Cassino were particularly ferocious and lethal, yet as the months passed, the Allied forces continued to drive the Germans up the Italian peninsula. Led by Lieutenant General Mark W. Clark, among the war's most complex and controversial commanders, American troops became increasingly determined and proficient. With the liberation of Rome in June 1944, ultimate victory in Europe at last began to seem inevitable.

Drawing on extensive new material from a wide array of primary sources, and written with great drama and flair, The Day of Battle is narrative history of the first rank.

What listeners say about The Day of Battle

Hard to Listen to, but Very Worthwhile

I needed to read this book. None of the history classes I took in high school or college ever discussed World War II; I’ve had to learn everything about it on my own over the years. After retiring for good five years ago, I decided to focus heavily on this major 20th century event through biographies, histories, and well-researched historical fiction. I also watched a number of documentaries which included "The War," "Band of Brothers," "The World at War," and "The Pacific" as well as all of the Extras found on the DVD sets. However, nothing I had previously seen, listened to, or read adequately covered the Italian theater. It appeared to be a rather neglected aspect of World War II, or at least it seemed so to me.

When Rick Atkinson completed his The Liberation Trilogy on the war in Europe, I knew I had to read them all in order to piece together the European aspect of World War II. I discovered from "An Army at Dawn: The War in North Africa, 1942-1943" just how totally unprepared the United States had been when we entered this ongoing conflict--how we sent untrained troops and officers into the fray, and how much we learned through fighting with the British, against the Germans. But what of Sicily and Italy? What of the Italian Campaign?

In this second volume, "The Day of Battle: the War in Sicily and Italy, 1943-1945" I found out more than I had expected. The arrogance, huge tactical errors, and misjudgments of many of the generals caused unbelievable suffering and unnecessary death for our troops and those of our allies in this corner of the war. I knew it had been bad, but it’s hard to conceive just how horrendous it really was. No wonder this isn’t the part of WWII we hear much about! Of course we trumpet the successful landings at Normandy in 1944 rather than those that were so nearly repelled with terrible losses at Salerno in 1943. While the courage and perseverance of the men themselves was admirable, much that they were asked to do was stupid and hopeless to the point of being shameful. It was hard to listen to, really it was.

The author provides intricate detail, often using just the precise word, to convey the taste, smell, and misery of this time and place. He portrays the major players as he sees them from from his thorough research of the archives, and sometimes it’s not flattering. He clearly admires Eisenhower, but is certainly less impressed with Clark and Montgomery. In the end this ultimate question looms large: Was the Italian Campaign necessary? Did it further the cause of victory in Europe by occupying a significant portion of Hitler’s resources? Or was it instead a colossal, pointless waste of men and material? Atkinson poses these questions at the end of this volume, leaving it to the reader for final judgement. I’m still pondering...these are not simple questions and perhaps they are unanswerable...

...but I needed to read this excellent and difficult book. It taught me much that is important for me to know. It also posed additional questions that will require more reading and rumination. I am certainly motivated to soon begin the last of this trilogy, "The Guns at Last Light, The War in Western Europe, 1944-1945." First, though, I think I’ll listen to some lighter, less intense fiction in order to clear my palate before taking another plunge into WWII.

Best non fiction book I have ever read!

The Liberation Trilogy is the best non fiction I have read. It gives equal time to what the allied high command is experiencing, as well as what the guys on the front lines are experiencing. The book gives so much detail into what daily life was like for a grunt, as well as not sugar coating the horror they all experienced. In addition, Atkinson will also throw in many interesting asides as to the history of the place where the battle is being fought. As this book takes place in Italy, there are many ancient battle grounds, spots where ancient monsters were slain, Roman orgies, and important early Christian Church locations.

Listen to this book! You will laugh learn and cry!

What made the experience of listening to The Day of Battle the most enjoyable?

Despite the fact that 60,000 books have been written about WW 2, this is truly a gem. Volume 2 of this trilogy is very well researched, well written, and beautifully narrated. Very lucid and coherent.

What does Jonathan Davis bring to the story that you wouldn’t experience if you just read the book?

My father spent three years in Italy in U.S Army during WW 2. This book helped me relive his experiences.

The utter waste and horror of war...

I have listened to and read a great deal of material on both world wars and thought I had a clear grasp of the essential action. Here I was proved wrong. "The Day of Battle: The War in Sicily and Italy, 1943-1944" is the second of a trilogy covering the North African, Italian and Western Europe theaters. I stumbled across this one first without listening to the others.

Besides my interest in history I have spent much time in Italy and thought this would add detail to the places I have visited and explored. This indeed was the case. I will never view Monte Casino and the surrounding countryside the same again, nor the pleasant hills and villages of Sicily.

The narration is perfect, Jonathan Davis has just the right blend of voice quality and pace to take you through these years of destruction, stupidity, ill fortune and bravery. The author Rick Atkinson provides a good balance of both the Allied and Axis viewpoints and you get a real feel for what forces caused which actions. For you the book is a significant investment in time (not to mention if you get the entire trilogy) but it is well worth the listen.

The research is significant and, although you already know how the story will end, you are continually amazed at the unending calamitous action from both perspectives. I was also introduced to participants from countries that I had not realized were involved, such as the Indian and Polish units that played significant parts in these battles.

It is hard to grasp that these young men (even the generals were relatively young) were our fathers and grandfathers and their epic trials are still within living memory. You will never look at these men the same again after hearing what they went through. By the end of the book you are actually weary of war and death and need a rest.

Puts everything in context

Where does The Day of Battle rank among all the audiobooks you’ve listened to so far?

In the top ten books I have listened to. Usually, military history is tough to listen to. Too many places and names. This was well written, and well read, and because I had a significant background in the topic it was easy to follow.

If you are like me and watched movies like Patton and The Big Red One as a kid, this book and its predecessor puts it all in context. For military enthusiast, this book is a must.

An excellent history of an important campaign

What did you love best about The Day of Battle?

My father (J. Nelson Howard, Texas A&M class of 1944) participated in the events in this book, first with the 36th Division and latter with the 88th Division. I have a letter he wrote home on June 5, 1944 from Rome. The day after he was one of the first GI's into Rome.

Dad didn't talk a lot about his time Italy, but I know he hated Mark Clark, as did his Aggie friends.

I learned some of the reasons why from this book, and also heard Clark's side of the story.

What was one of the most memorable moments of The Day of Battle?

Reading about the 36th and 88th Divisions.

Overall production value of this recording was excellent, there were no dropouts, changing speeds and volumes, or repeated clips.


Was this a book you wanted to listen to all in one sitting?

It's a long book, but well structured to keep one's interest high.

Jonathan Davies narration takes a few hours to appreciate especially after the ear candy that is George Guidall who narrates book one of this series. However the storytelling is good and the content riveting. The Mediterranean Campaign was a meat grinder that made men of boys, and ultimately is still debated as to its necessity. A powerful story of leadership and grit.

If you could sum up The Day of Battle in three words, what would they be?

What was one of the most memorable moments of The Day of Battle?

Anzio becomes a beached whale, for the Allies.

Have you listened to any of Jonathan Davis’s other performances before? How does this one compare?

Several, the book is ambitious in scope, covering the entire Italian campaign quite well. The battles of the resistance, and the struggles in the Allied command recommend a second listen.

Great narrator. Very interesting history of campaigns in Italy, the valor, bravery and perseverance of the Allies under difficult circumstances on many levels. Interesting to learn about the various Commanders and their personalities. Listening to to Rick Atkinson's trilogy of WW II .......on to the third and last.

I hated history as a student. Thanks to wonderfully written books like this one, I have become an avid consumer of American history.