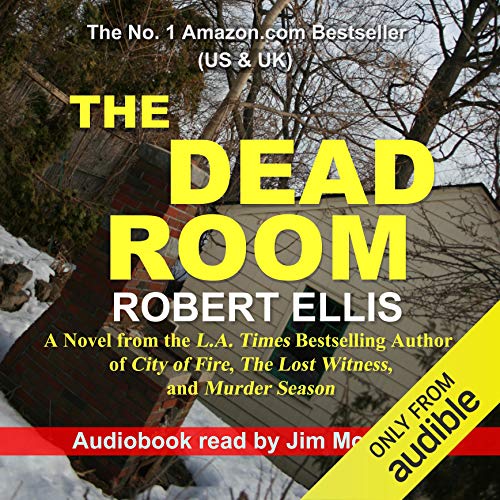 Written by: Robert Ellis
Narrated by: Jim McCance
Try for $0.00

A young woman is found, brutally murdered and left on gruesome display in the "safety" of her own home. The atrocity kicks off an investigation into a bizarre string of increasingly disturbing murders, all believed to be perpetrated by someone of unprecedented savagery and cunning. As the city's panic rises, civil attorney Teddy Mack is thrown headlong into the grisly homicide case - and into a world of dirty politics and corrupt justice, where deceptions are as deadly as the killer's twisted secrets. Now, another woman is about to meet the same horrific fate as the others.

To end a madman's reign, Teddy must enter his maze - a place of unimaginable terror and shocking revelations.

With his second thriller, L.A. Times best-selling author Robert Ellis delivers an explosive listen with full-blown characters caught in a world stacked with twists and turns and an emotional intensity that burns white-hot.

The Dead Room serves as the introduction to City of Fire and remains a truly one of a kind find.

What listeners say about The Dead Room

What would have made The Dead Room better?

A bit more realism, character definition and a bit of humor. Humans have a way of dealing with the worst things they see with a bit of dark humor as a defense mechanism. The suspense authors I love best are able to include some of that as a way of humanizing their heroes and avoiding the pitfall of droning melodrama (see Stuart MacBride, Adrian McKinty, even Steven King).

Has The Dead Room turned you off from other books in this genre?

Rather one-note and melodramatic. Nice voice though.

I don't mind a story that gets a bit grisly if I love the characters and can identify with them, and if the crimes are anchored in some kind of reality. This book left all those qualiies in the rear view mirror and started to just feel silly at some point. I found the characters kid of flat. Like I said, it's just not for me, although I see that others have enjoyed it.

Where does The Dead Room rank among all the audiobooks you’ve listened to so far?

I gave read many serial killer stories and it starts getting repetitive but this book was refreshing. This one follows a young criminal lawyer instead of a police detective. It is by far one of the best mystery novels I've read. Also I have never listened to Jim McCance before but he was great, at times he sounded like Buffalo Bill from "Silence of the Lambs" and other times he sounded like my favorite narrator, Scott Brick. If you like Scott Brick you should like Jim McCance.

I enjoyed listening to the evolution of Teddy who was somewhat naive and desperate for a mentor.

The underwater scene, I'll leave it at that. ;)

Once I got into it I couldn't put it down.

Not good at all

Lot of words about how this book is bad will not help. Along with a bad narrator this is a just a ordinary book of an demented serial killer. As an avid reader of mystery thriller and drama, I did not enjoy the book. Skip if you have other options in your wish list is my advice.

Anyone have a match?

Writing a review on a book, just based solely on 'the book' when it's audio is hard to do. The concept and overall story was different and left us all wishing we had a lawyer like the main character Teddy. It's well developed ,even tho farfetched: there wasn't unanswered questions and had a good ending. On to what makes an audiobook.
I had never heard of the narrator before. Yep, I listened to the sample. In that 4 minutes I started thinking of detectives of old. Of smoky rooms and crinkled suits, a red flashing ' Rooms Available' sign the only light in the room. That is what Vance's voice made me think. I started the love/hate almost immediately. His deep, drawn out, extremely slow baritone grated on me. Made even worse when he did female voices and worse still, when his deep voice went even deeper because it lowered the IQ of that character. I found myself wondering..can anyone light a fire under this man..just move him a little quicker in the telling? Give one persona a quick wit and sharp tongue and let it come out about 3 paces faster? Everyone sounded dull witted. I won't even touch the 'love scene' because before it even happened, before I even knew it would, I said to myself ' Please don't let this man do a love scene. Please!' And then boom it happened. I fast forwarded.
At some point, I took a deep breath and tried to focus more on what the author himself was writing and not so much on that very distinct telling. So, I shook myself of the 1946 'The Big Sleep' mode, tried to appreciate what Vance was bringing to the table and that is how I can give it 3 stars. The story was good. But it is Audio and you are rating that also. Would probably be better read on paper.

This may well be my favorite audiobook in recent memory. Its the story of Teddy, a lawyer who has joined a firm specifically to never have to deal with criminal law.3 months after joining the firm, he is thrust into a brutal, bloody, high profile case as a favor to the senior partner. This brings up a myriad of issues for Teddy about his past, because he believes that the accused is innocent, as was his father when he was a child.

The revelations about the true nature of the senior partner, plus the district attorney, are laid bare in a frighteningly realistic way that has life changing consequences for everyone involved.

I don't want to spoil the story, but I have to say - I did not see the end coming. At all. When I thought it was over, it wasn't.

MCCance does an amazing narration - the characters are are well developed and easy to distinguish, and he voices then with emotion and inflection unique to each role. An excellent listen!

Great Mystery With A Great Ending

This is a mystery revolving around a deranged serial killer, but really exposing an evil, politically driven prosecutor and the unethical legal community involved in the case. It is a complicated and far fetched story of murder, ambition, betrayal and justice. But as we all know, often truth is stranger than fiction, so I am willing to overlook elements that required me to suspend belief.

Teddy Mack is a civil attorney with no experience in criminal law. He is drawn into a murder case by his mentor who owes the family of the accused a huge debt. Through no fault of his own, the case quickly becomes public as it appears it is really about a serial killer. Teddy soon realizes he's being used as a pawn.

Much like any good conspiracy, there are a number of villains thwarting Teddy's investigation at every turn. But like every exceptional conspiracy novel, (Count of Monte Cristo being the best example)we see that everyone and every issue involved is dealt with properly.

While I hated the narration early on and never grew to like it, it's fair to say it did not ruin the experience.

Jim McCance, as the narrator, did a decent job telling this tale of serial killing, attorneys, childhood trauma with a dollop of art and romance but the story is really far-fetched, hackneyed and ridiculously unrealistic. Not hateful but pretty disappointing.

Where does The Dead Room rank among all the audiobooks you’ve listened to so far?

At the top of my list, hard to stop listening. Great story that kept my interest very high, the Narrator Jim McCance was breath taking. Cannot understand how a Narrator can be chosen to fit the book so extremely great. Loved this book Robert Ellis, can't wait to listen to another.

Teddy, he was so great at his job and he stood up to the big boys.

Have you listened to any of Jim McCance’s other performances before? How does this one compare?

NO, but I will soon.

A couple places I laughed but mostly just loved everything about it.

Good Job Robert Ellis and Jim McCance. You got your work cut out for you to top this. O I know you will.

Great but no ear for Philly

I'm a muti generational Philadelphian. No one in Philly speaks like any of Jim McCance's characters. He's like listening to an Austrailian speaking American, you know, like drinking beer with fruit in it. Plus he sort of imitates Scott Brick.

Anyway, Robert Ellis's written an intelligent legal mystery with more twists than a Philly soft pretzel. I liked it a lot. I'm thinking it might be difficult to build the engaging hero into a series lawyer given the ending. Yet that's a shame since Ellis has invested a lot into creating layers of character into the young guy.

The cunundrums of life keep breaking over the guy's life prying out answers to some great inexplicable crack in every ethical person's life trip. Yep,I liked The Dead Room a lot and will even listen to Jim McCance again providing Robert Ellis doesn't make him take us again to my home town.

The Dead Room is a marvelous crime and legal thriller. The protagonist is a civil attorney, and his is virtually the only decent person in the book. This novel is about the case of a gruesome serial killer and about corruption in the Philadelphia prosecutors office and court system. This is a truly extraordinary 5 star thriller. The narration was disappointing, but I did become accustomed to it. The follow up book to The Dead Room is City of Fire which is a very good thriller, but The Dead Room is better.