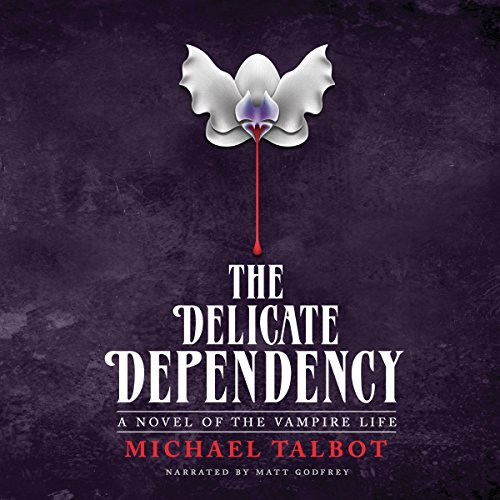 Written by: Michael Talbot
Narrated by: Matt Godfrey
Try for $0.00

They are cool to the touch and alluringly beautiful in their ageless youth. Their laughter seduces, their brilliance beguiles. They guard the secrets of science and history, and the answers to the mysteries of life and death lie within their vastly superior knowledge. In centuries past, they were known as the Illuminati. They are the vampire.

Dr. John Gladstone, a scientist in Victorian London, is thrust into their world after his carriage runs over a young man of angelic beauty named Niccolo. When Niccolo kidnaps Gladstone's child and vanishes, the doctor must go in pursuit, with the help of his daughter, Ursula, who is enticed by the lure of eternal life, and Lady Hespeth, whose demure exterior hides a dangerous obsession. Why are the vampires taking children, and what is the connection to Gladstone's experiments with a deadly virus? And how can he possibly prevail against a race of immortal beings with power and intelligence infinitely beyond his own?

Michael Talbot's The Delicate Dependency (1982) is often cited as one of the best vampire novels ever written.

"The tension builds page by page to a stunning climax...I doubt that I will ever forget it." (Whitley Strieber, author of The Hunger and The Wolfen)

"[O]ne of the most impressive explorations of a vampire mind ever written...a novel of considerable suspense...compelling and deeply original." (Darrell Schweitzer, Encyclopedia of the Vampire)

What listeners say about The Delicate Dependency

I expect it is rare to have a tome imprint itself onto you in a way that you never forget the title or the author. This is my experience with this next novel. I read The Delicate Dependency in the late 80s early 90s, and I believe that my Aunt Jo gave me the novel. I always remembered that it was brilliant, but over many years I have forgotten many of the details, and in time I lost the copy I had.

The memory of this book would pop up from time to time, and I dreamed it would be wonderful to read it again. However, finding another copy was proving to be hard, so I would give up each time. Then in 2018, I tried again and low and behold I found a digital copy on Amazon! A bonus is that there was also an audiobook version. I could hardly contain myself and was very excited about experiencing this fantastic novel again.

The novel transports us to Victorian-era London. The players are Dr. Gladstone, his eldest, Ursula, his youngest, Camille, Niccolo, a youthful-looking man with angelic beauty, and the strange Lady Hespeth. The talented doctor and his daughters find themselves in an exciting and deadly pursuit, navigating the mystical world of the vampire.

This is not like any modern-day vampire novel you have heard about, and I am in agreement with many others that the late Michael Talbot created by far one of the best vampire novels around. It is compelling, spellbinding, and electrifying. Matt Godfrey is an award-winning narrator and does a fantastic job bringing this tale to life. I really enjoyed his interpretation. If you are into young adult vampire stories, then this may not be the novel for you. If you are up for experiencing a true classic, then this is a book you need to read.

Another Clever Tale from Michael Talbot

This is the third book by Michael Talbot I've picked up, and by now I've noticed certain trends in his writing. Talbot has a fixation with supernaturalism, history, and eccentricity, all of which he usually blends together very well in his writing. That being said, however, I don't think The Delicate Dependency is his strongest work. While it was all very interesting, I found the supernaturalism and history elements lacking, while the eccentricity element was too heavily focused on. Similarly to his depiction of characters in league with the supernatural in his other works, Talbot depicted his vampires as lavish creatures, but the majority of the story seemed to hinge on this element and it simply became a bore to push through the highly detailed descriptions of the vampire lifestyle which in some cases only served to drag the story. This contributed to my lack of engagement in the story and characters throughout most of the book. I actually had to fight the urge to quit reading about halfway through. I'm glad I didn't, however, because the story did end with a pretty clever plot twist that more or less made up for the slow buildup. Overall I think The Delicate Dependency is a decent read, however I would not suggest it be one's introduction to the works of Michael Talbot. I would first recommend Night Things or especially The Bog.

The audiobook's narrator, Matt Godfrey, really came through in this one. Godfrey also narrated one of Talbot's other works I've read, The Bog, in which I was a degree less impressed with his narration. However, his talent really glowed in his narration of The Delicate Dependency. What I enjoy so much about his narration is his impression of multiple different tones and accents which never leave me guessing who's speaking in the story. It really helps streamline the listening process so that I less frequently catch myself rewinding because I couldn't remember who said what.

Don't judge this book by it's cover

I was given this free review copy audio book at my request and have voluntarily
left this review.

This was a book that I've wanted to read for a long time but either never got my hands on a good copy, or had too much going on at the time. So, when I had the opportunity to listen to the audio book, I jumped at the chance. I was familiar with Matt Godfrey's work and was quite excited for this book. It definitely has the same atmosphere (and setting) of Ann Rice's early novels. In fact, this book came out pretty close to The Vampire Lestat. Anyway, the dialog is appropriate for the setting and added a great period ambiance. All in all, this was just as good as I hoped. Worth the credit.

Same old story, different angle. Totally worth the listen or read. I recommend this book.

This is a book I read without knowing the author or anything really about the book. I’m so glad I did though. This is an incredible book. I loved the writing and the atmosphere that was created. I’d recommend to fans of horror or Victorian era books.

A Must Read for the Vampire Aficionado

“I told you,” she said bitterly. “I warned you at the very beginning that you were blind and did not see what others would see.”

This is an absolute must read for the vampire aficionado. It should be better known.

The Good: the most original ideas about vampires I’ve ever read. My favorite, vampire monks in the Dark Ages hanging out safely in monasteries with their books.

The Great: an alternative history in which everything in the Library of Alexandria was preserved. (You know you were pissed off the first time you read about that... and every time you thought of it thereafter)

The Bad: it’s an exhaustive exercise in paranoia. It’s one lie after another after another. Also the MCs are dislikable, Ursula most of all. As both of these are best seller trends I’m again surprised more people don’t know about this book.

I’ll end with Niccolo’s words:
“Never trust the vampire, for everything they say and do is for some other purpose. They will play a cruel and enigmatic ‘game of the mind’ with you and it will be up to you to solve the puzzle...”

One of the best vampire novels of all time

I don’t even know how to begin to describe what I felt while listening to this novel. It took me into a new world and then on a rollercoaster that made me question everything! If you are a fan of vampires I cannot rev come to this book enough

"Nothing is as it seems."

Early on, the author, through more than one character, tells the reader that 'nothing is as it seems' and this is true right on through until the very last page.

I Have Loved This. Book For Years . Read Exceptionally Well. Must Listen To Enjoy !!

Typical Vampire story but not...

I like this, it had a unique flavor with the vampire stories told over and over again. Yet it had an interesting twist to it. I will probably read it again someday.

Waste of my time.

This story dragged on and made no sense. It put me to sleep more than once.