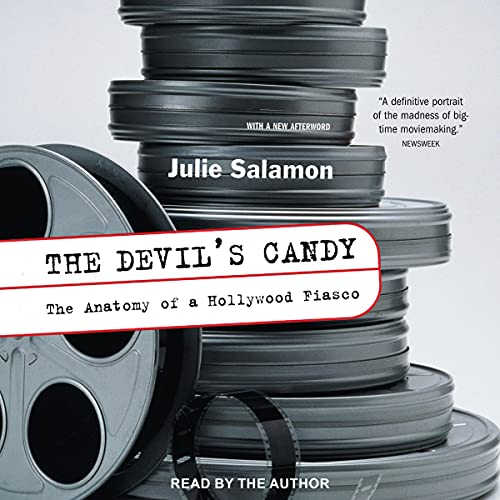 When Brian De Palma agreed to allow Julie Salamon unlimited access to the film production of Tom Wolfe's best-selling book The Bonfire of the Vanities, both director and journalist must have felt like they were on to something big. How could it lose? But instead Salamon got a front-row seat at the Hollywood disaster of the decade. She shadowed the film from its early stages through the last of the eviscerating reviews, and met everyone from the actors to the technicians to the studio executives. They'd all signed on for a blockbuster, but there was a sense of impending doom from the start - heart-of-gold characters replaced Wolfe's satiric creations; affable Tom Hanks was cast as the patrician heel; Melanie Griffith appeared mid-shoot with new, bigger breasts. With a keen eye and ear, Salamon shows us how the best of intentions turned into a legendary Hollywood debacle.

The Devil's Candy joins John Gregory Dunne's The Studio, Steven Bach's Final Cut, and William Goldman's Adventures in the Screen Trade as a classic for anyone interested in the workings of Hollywood.

What listeners say about The Devil’s Candy

This book should have a thousand 5 star reviews by now! It is a hidden gem for movie lovers, pop culture fanatics, and gen x people like me, who were young adults in the early ‘90’s. I am appreciating the picture of young directors and young actors who are still so familiar for the nostalgia and very human at work interactions/behind the scenes view Salamon gives us.
I like to spend my credits on books that are longer and this is wholly satisfying this far. Although I’m trying to pace myself, the first 10 hours have gone by fast. I am rather choosy about narration and agree with earlier reviewer that the author’s voice, while not at all polished sounding, is sincere and rather charming. Which brings me to perhaps what has charmed me the most so far in this story and it is ‘Brian DePalma.’ I admit to not having been overly familiar with him or his story and probably wouldn’t have considered him to be my cup of tea. However, without being fawning or at all fake, Salamon shows us a man who is sensitive and dare I say ‘polite,’ in a business that is full of characters who couldn’t recognize his sensibilities for what they are and may have dismissed him as rude or aloof. This can be a problem for sensitive people when they get overwhelmed or are in hyper-focus mode, so, I get it. We see his friendship with Spielberg (a very nice little scene I just finished.) We see young Tom Hanks and pregnant Rita Wilson... Melanie Griffith when she was hot in the scene and a smirking, young Bruce Willis. If you’ve worked on a movie set, the description of the pecking order and chaos will all come back to you. Lol.
All this and I haven’t even gone into the actual story of the making of the movie! There is a lot there, full of detailed misunderstandings, wins, heartbreak and absurdity. For now I plan on watching it again with my husband who has enjoyed listening to me pass on stories from this book, as soon as I’ve finished listening. Definitely recommend! It’s a fun book.

Even though the movie and story are over 30 years old this audible version really does give insight into how a big Hollywood movie is made. There needs to be more stories about these Hollywood disasters and what choices got them there.

And I am riveted. This thing is phenomenal fun and her voice is so cute in her naively intellectual way, like she’s discovering it all as she goes.

The narrator sounds like a feeble old woman trying to do a little girl's voice. it is such a shame because the story is so good.

It sounds like the author has gum in her mouth while she is reading. Very annoying to have in your ear.

It's a testament to how interesting, insightful and well-constructed the book is, that one can (just) survive the author's abominable reading of it. Nothing in my 100+ Audible library compares in terms of flat tone, lack of emotion, absence of proper breaks, etc. But as I said, the book itself is a masterpiece.

I wish they had a pro read the book instead of the author bc it wasn’t nearly as enjoyable as it should’ve been with a good narrator.

Author reading own work as if a textbook

Authors reading their own work is rarely great. This is another case of interesting content being read like a technical manual, with little emphasis on key pieces.

I was truly, for years, looking forward to this book. From everything I had heard over the decades every. single. aspect. of this film and its production was an absolute disaster. But in the end…it really wasn’t. It truly seemed as if it was a typical movie being filmed.

There were tales about how especially difficult Bruce Willis was on set. But whenever he’s mentioned in the book, it’s pretty mild. One part: he keeps himself separated from the rest of the cast and crew. Which, sure, maybe he isn’t the most open guy. Perhaps he’s introverted and prefers his own friends. Another part was when he tried overstepping his role and quasi-directed a couple of actors without checking with De Palma first. But…then he and De Palma talked about it and they came to an agreement. So…no real conflict. For some reason, though, Willis has nothing but vitriol for the author (Julie Salamon).

Tom Hanks was mentioned, but it was exactly what you’d expect of Hanks. Melanie Griffith was typical of what you know of her. She likes attention- but she’s an actress, so of course she does.

Brian DePalma is a director, of a big budget (at the time) motion picture, and had to juggle everything that was thrown at him. And at no time was he a diva or a horrible abuser to his crew. He was a leader just like he’s supposed to be.

Julie Salamon as a writer has a habit of adding details which are unnecessary. Such as one woman who was wearing open-toed shoes and a dress. Okay- that doesn’t matter in the least, just tell me her role in the story. Also, she repeats things. Like at least twice there was mention of a previous project someone was involved in…and then it’s mentioned again a few pages later.

And Salamon was also not the best narrator. Her voice just isn’t right for it. Often she’d end a section sounding as if it was the saddest occurrence ever. It’s hard to explain.

a balanced insiders peek into the perfect storm of the movie making process. well presented.