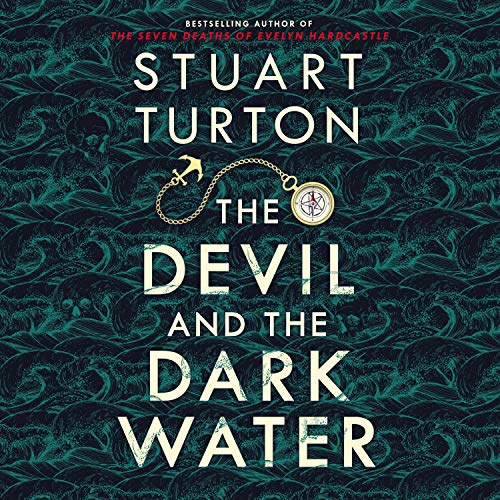 The Devil and the Dark Water

Written by: Stuart Turton
Narrated by: Julian Rhind-Tutt
Try for $0.00

New from the best-selling author of The Seven Deaths of Evelyn Hardcastle! Take Stephen King horror, a Sherlock Holmes-esque detective, and add a dash of Pirates of the Caribbean for an utterly unique murder mystery on the high seas.

Samuel Pipps is the greatest detective of his day...but now he’s a prisoner, accused of an unknown crime by one of the world’s most powerful men. Along with his faithful sidekick, Arent Hayes, he’s sailing back to Amsterdam from the East Indies, where he’ll stand trial. But no sooner are they out to sea than devilry begins to blight the voyage. Still shackled in his cell, Pipps sends Hayes to solve a mystery that connects every passenger on board. All hope is pinned on Hayes solving the mystery, but when he goes missing, Pipps is faced with the most dangerous puzzle of his career.

All the while, voices whisper to him in the dark. But are those whispers clues? Warnings? Or the devil himself?

The Devil and the Dark Water has been optioned for television, and Turton's debut novel, The Seven Deaths of Evelyn Hardcastle, is being adapted as a seven-part series for Netflix.

What listeners say about The Devil and the Dark Water