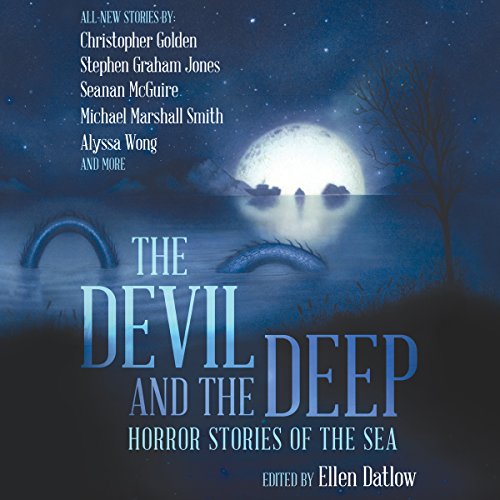 The Devil and the Deep

Stranded on a desert island, a young man yearns for objects from his past. A local from a small coastal town in England is found dead as the tide goes out. A Norwegian whaling ship is stranded in the Arctic, its crew threatened by mysterious forces. In the nineteenth century, a ship drifts in becalmed waters in the Indian Ocean, those on it haunted by their evil deeds. A surfer turned diver discovers there are things worse than drowning under the sea. Something from the sea is creating monsters on land.

In The Devil and the Deep, award-winning editor Ellen Datlow shares an all-original anthology of horror that covers the depths of the deep blue sea, with brand new stories from New York Times bestsellers and award-winning authors such as Seanan McGuire, Christopher Golden, Stephen Graham Jones, and more.

What listeners say about The Devil and the Deep

Not what I expected. Only very few decent stories.

I thought that this was going to be a very chilling and scary book. Turns out only a precious few were worth the time and effort. I'm a fan of the most horrific, well written and entertaining short stories. Maybe others will find these stories enjoyable. I personally would've liked more loom and doom. "Haunt" was a good novella in this collection. But was spoken in strong accent by narrator. Still was my favorite.. I'm afraid of the sea, so I believed this collection would frighten me easily. I recommend that you listen to the sample story before you buy. Again, this is only my opinion.. Wanna be really scared? Try Berkley Street Series. I was honestly afraid and cringed at many points of the first two installments.. Plus I received all 9 installments for one credit. A great deal.. Looking forward to finishing the others installments..

Just be aware if you’re looking for tension and out right horror, this is probably too tame for you. Much more about people and reactions than you being afraid to turn off the lights.

A Stringer Full of Modern Horror

I've been reading a lot of classic horror with its modest scope of stereotyped identities. This grouping of shorts was refreshing. Not only did the stories have a variety of identities, they were represented as live humans rather than stereotypes. The stories range across a satisfying diversity of horror types. And the narration is perfectly attuned to each story and character.

This book has a wide variety of maritime horror tales, representing diverse settings, perspectives, and narrative styles. Ellen Datlow is a master of her craft, and this holds true to her high standards. Narration and production values are solid.

A worthy read for anyone enraptured with nautical horror. Variety of stories, each with their own beautiful terror.

good for a sea horror enthusiast

some of the stories are lingering in "how does this relate to the sea?" but others are real gems in sea horror.