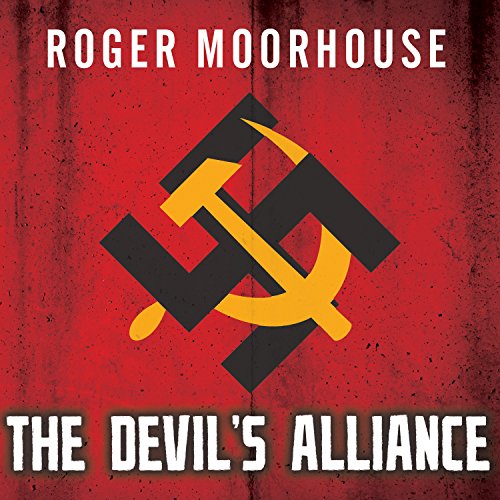 Written by: Roger Moorhouse
Narrated by: Derek Perkins
Try for $0.00

History remembers the Soviets and the Nazis as bitter enemies and ideological rivals - the two opposing totalitarian regimes of World War II whose conflict would be the defining and deciding clash of the war. Yet for nearly a third of the conflict's entire timespan, Hitler and Stalin stood side by side as partners. The pact that they agreed on had a profound and bloody impact on Europe and is fundamental to understanding the development and denouement of the war.

The Devils' Alliance explores the causes and implications of the Nazi-Soviet Pact, the creation and dissolution of which were crucial turning points in World War II. Forged by Joachim von Ribbentrop and his Soviet counterpart, Vyacheslav Molotov, the nonaggression treaty briefly united the two powers in a brutally efficient collaboration. The Germans and Soviets quickly conquered and divided Central and Eastern Europe. Hundreds of thousands of people caught between Hitler and Stalin were expropriated, deported, or killed. Fortunately for the Allies, the partnership ultimately soured. Ironically, however, the powers' exchange of material, blueprints, and technological expertise during the period of the pact made possible for a far more bloody and protracted war than would have otherwise been conceivable.

Combining comprehensive research with a gripping narrative, The Devils' Alliance is the authoritative history of the Nazi-Soviet Pact.

"A well-researched work offering new understanding of the pact's pertinence to this day." ( Kirkus starred review)

What listeners say about The Devils' Alliance

Fascinating look at much neglected peiod

The central premise of The Devil’s Alliance is that the 1939 Nazi-Soviet agreement, secured just prior to the German invasion of Poland, is wrongly considered by most historians to be only an incidental event of World War II but was, rather, one of the central events that made the war possible. Mr Moorhouse argues that the alliance is barely mentioned in most histories of the period but should be examined in detail to understand how it affected the ability of Germany to wage war and especially how it affected Germany’s ability to wage war against the Soviet Union.

Most histories of of World War II in Europe that I have read do mention the agreement and consider it to have been essential in securing Germany’s eastern borders and in allowing Hitler to fight a single front war during his battle against France and England, and all of those books describe the events in western Poland and the effect the German invasion had on the peoples of that part of Poland. However almost describe the events the alliance set in motion for the peoples of eastern Poland, Latvia, Estonia and Lithuania and none describe how the alliance functioned, the effect it had on Germany’s ability to wage war, the effect it had on the Soviet Union’s rearmament efforts and the political and social effect it had on the German and Soviet population.

This book is quite different. It covers the 22 months of the agreement in detail and provides wonderful information about subjects I have never seen covered at all. How did the ideologues of both governments handle the political fallout of a friendship agreement between two tyrannies that hated and despised each other? How did the agreement effect international organizations like the Comintern that had been set up to propagandize against Nazi Germany? How did Communists in other countries handle the friendship agreement with a country the Soviet Union had been vilifying for years? What did the Soviet Union get in exchange for their raw materials? What effect did the Soviet raw materials have on the German ability to wage war? Who benefited most? And many, many other subjects that make for fascinating reading including an epilogue discussing how the events during that period ended up affecting the the Soviet Union years later during the late 1980s and early 1990s as all the Soviet Republics gained their freedom. Of special note was how the 1939 deportations by the Soviet Union of the citizens of the Baltic Republics ended up generating intense hatred still felt in 1990 and how that affected relations between those newly independent republics and the dying Soviet Union.

Mr Moorhouse’s writing is clear and interesting, the material is largely fascinating and the narration of the book is very well done. Some parts are a bit more graphic than they need to be and are difficult to listen to, but I have learned a great deal concerning the period in question and feel that it has been very helpful in clarifying much about the agreement and how it worked. Some information was fascinating and I was surprised to find out that the Soviet Union received, among other finished goods from Germany, war making material such as a pocket battleship, improved artillery and German planes. On the German side it can fairly be said that the alliance provided Germany with much of the petroleum and lubricants that allowed it to wage war against the Soviet Union itself. This book is a welcome addition to the literature concerning World War II in Europe and I recommend it to those with an interest in that period of time.

Great writing, research, and great narration combine to tell a story that is truly fascinating and interesting. So much history and geopolitical intrigue becomes clear as a result of understanding these 22 months of the Ribbentrop-Molotov Pact. I highly recommend it to anyone interesting in the nature of WWII.

An exceptional narrator, and a great story. I learned a lot and will definitely read more from Roger Moorhouse. I hope to find Derek Perkins in the process...Great job!!!!!!!!!

The Alliance Between Nazi Socialists and Stalin.

Few students of WWII remember that Hitler and Stalin had an alliance for nearly five years.

Extermination of the Jewish was mutually shared.

And then, like a fool, Hitler invaded Russia only to cause the death of hundreds of thousands of German, Russian, and Polish soldiers and ultimately fail.

Great book; any young person should read it to learn the true history of WW2. We need more books like this one

What History Books Should be

This was pretty much the perfect history book. The writing was superb, structure was good, story was compelling, claims were careful, and details were kept to a minimum. On top of all that, the narration was really excellent.

Clear Insight into a history I knew little about.

The story flowed like a novel. The introduction of characters that would ultimately give a clear picture of how the pact came into being and how it affected more than just USSR and Germany. Narration was clear and concise and a pleasure to listen to.

Filling In The Blanks

A little pocket of the history of the Third Reich in its run up to the war, as Moorhouse notes, the Pact is almost always given a summary treatment and then quickly forgotten. He seeks to amend that gap and does so in a workmanlike fashion. His writing never really gets that far off the ground, but if you're new to WW2 and stumble on this, it might have a good amount of material you're not aware of. For old sweats, however, it's interesting but not vital. At 13 hours it's perhaps an hour or two too long but it's not a chore to get through. Good enough for what it is.

Excellent book that is well researched and revealing. Will make you re-think what you thought you knew about this subject. Narration is also very well performed.

Very good but a little dry

very in depth and interesting ..but does get a little repetitive and slow at times

very good resource for understanding the mechanics of the times